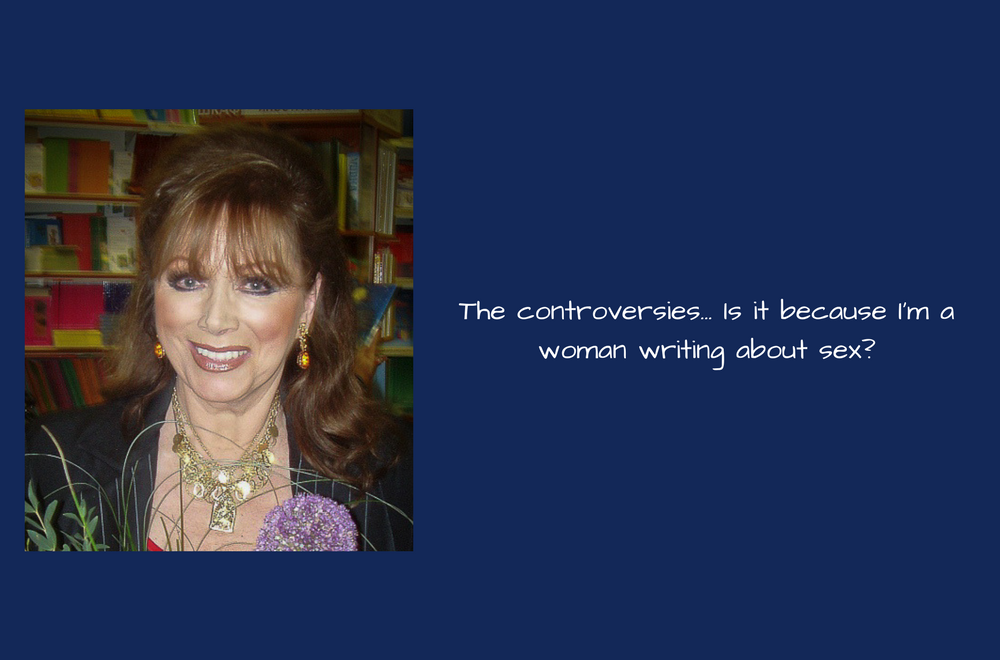 Jackie Collins is an unlikely hero in the world of writers – she is the queen of the erotica that speaks of sexual intrigue and forbidden relationships in Hollywood.

“I’m a survivor. I was thinking about what you said, and you’re absolutely right – I have to let go to continue. This devastating news is not going to slow me down. I’m my own person. I always have been. I’ve never believed in those people who blame everything on their parents – you know, I’m a fuck-up because my father was a fuck-up. Or I’m a drunk because my mother was an alcoholic. So my father was a hit man? Maybe. So he murdered my mother? Maybe. I don’t know any of these things for a fact. But I’m accepting them, and I’m beginning to realize they’re not part of who I am.” ~Jackie Collins

Jacqueline Jill “Jackie” Collins, was a British Libran born in Hamstead, London. The undaunted famous English romance novelist of Hollywood exoticism and sex took her last breath at age seventy seven, losing the battle to breast cancer. All her 32 books on glamour, sex and affairs in Hollywood were international bestsellers.

Collins was expelled from her school at age fifteen for writing raunchy stories. She admitted four decades later that she was a “Juvenile delinquent” but that didn’t deter her from following her passion, and that she was in fact glad that she could move away from the stereotype modus operandi.

Given her good looks, she featured in acting roles in the 50’s and had a brief brush with stage singing as well. Though she did try to get into the Hollywood film industry, grabbing side roles where her sibling Joan was an actress, she gave up when she felt acting was not her true calling.

Collins switched to writing, and her first novel The World Is Full Of Married Men behooved to be a best seller. Neither a scholar nor from the field of literature, like a normal inamorata, Collins took to fiction writing but soon got trapped in controversies for her unconventional and bold writing. Barbara Cartland called her book “Nasty”, “Filthy”, “Disgusting” only to be proved wrong. Though Cartland too was an English romantic novelist, her writing was more ‘ladylike’, and nowhere in comparison to Collins fervid novels.

Jackie Collins’ bio iterates “she’s unabashed in her novels from glamorous Beverly Hills bedrooms to a raunchy prowl along the streets of Hollywood; from glittering rock parties and concerts to stretch limos and the mansions of the power chronicles the real truth from the inside looking out”.

The fact is that Jackie Collins was the only writer who articulated the nature of the many lives lived by the Hollywood royals, and was widely acclaimed and heavily criticized over the years for her novels which portrayed a healthy dose of sex, drugs, fame and the damage the all three can create. To read her novels just for sexual pleasure won’t be doing them justice. She had to do a lot of research, do hard work, face rejections, and humiliations prior to launching her novels.

Jackie Collins took to writing steamy stories for her mates to devour, but little did she know that all of her works would turn out to be jim-dandy. It would be wrong if one says that Collins exposed only sexuality in her novels – to certain extent yes they were; all her novels spoke of forbidden relationships, love, lust, passion, scintillating love making – but she also unleashed the bitter truth of the lives of the Hollywood stars, which is equally true for the middle class society as well. She ripped open the masks of common faces through the lives of Hollywood actors.

Anyone writing openly on sexuality had either drawn in controversies, or the novels had been labeled obscene, or had fetched legal hassles, … and the list is endless. Jackie Collins too was criticized, but much to the dismay of those who criticized her, all her novels had a gargantuan effect.

When I discovered Jackie Collins at fourteen…

I was fourteen when I first read her book Chances. My mind was on fire: Can novels be that bold? Can sex be portrayed so openly? But it was equally intriguing. I got glued to her novels not because of the sexuality portrayed in her novels but the fiction, the thrillers, and the breath taking romance which contributed equally.

There were several writers who tried to copy her; but Collins proved to be the best. Jackie Collins has been called a “raunchy moralist” by the late director Louis Malle and “Hollywood’s own Marcel Proust” by Vanity Fair magazine.

Looking at her personal life; Collins was a British as well as an US citizen. She did marry several times, got divorced, and had numerous affairs. It was her own words “I have a man for every occasion”, adding: When I was a kid growing up, I used to read my father’s Playboy and I’d see these guys and they had fantastic apartments and cars. I have all of that now. Why would I want to hook myself up with one man when I’ve had two fantastic men in my life? One was my husband for over 20 years and one was my fiancé for six years.”

In The Sunday Times Rich List 2011, Collins was listed as the UK’s fifth richest author, with an estimated personal fortune of £60 million. In 2013, she was appointed Officer of the Order of the British Empire (OBE) Birthday Honors for services to fiction and charity. A mother to three daughters, she fought Breast Cancer for six years only to lose the battle two weeks before her 78th birthday, it was 19th September 2015.

To write unconventional and bold stories is not a taboo; you can write bold, you need not be scared of your freedom of speech. Collins just wrote, she didn’t care – So is she a bad woman? I guess not.

So why our society is so biased?

It’s all over the globe where time and again books/novels have been considered obscene. Society do you know what it is to an author to bring out a book? It needs tremendous dedication, uphill battle, rejections, foolish madness and years of writing when a writer launches a novel.

Listing a few Literary Classics which were labeled obscene:

Lady Chatterley’s Lover (1928) by D.H. Lawrence – An affair of a rich woman with her husband’s servant.

Madame Bovary (1857) by Gustave Flaubert – It actually portrayed the unstable mind of a depressed woman Emma.

The Well of Loneliness (1928) by Radclyffe Hall – Lesbian protagonist.

Despite these facts Collins dared to venture the road less travelled and create a niche for herself.

She should be an inspiration to those who dared to dream big, despite the fact she was expelled from school, never had a brush with literature, has had a failed acting career, wrote erotica so that her friends could devour, handled relationship issues… but what she did was to write what she felt. In her interview with Readers Read when she was asked why there is so much sex in her novels; she replied, “It’s extremely amusing because there is so much sex on TV now […].The controversies… Is it because I’m a woman writing about sex? Or is it because people feel sex is much more personal when it’s captured in a book? [..] I only know that I prefer writing erotic sex to rude sex, and also, I write great married sex — contrary to popular belief, that does take place! Just ask Angelina Jolie and Billy Bob Thornton!”

Jackie Collins’ legacy to us

It was in her last letter to her readers she wrote “Be kind and be grateful. Never underestimate the power of your mind. Embrace what you love, and LIVE life to the fullest, as tomorrow is not promised to any of us. Whatever your pain or struggle in life, don’t allow it to turn you into a victim… let your battle turn you into someone else’s hero! Keep your comments coming on Instagram, Facebook and Twitter… you know I love hearing from you. I’m off to keep writing! Stay healthy, stay lucky and take chances!”

So be free spirited and write what your heart says. You cannot be afraid of people willing to judge you, ’cause if you fear life, then you will never live. People will judge you anyway. Go that extra mile; there is no rush, and also when you run out of your heroes, be one. To see the world things dangerous to come; to see behind walls draw closer; to find you and to feel.. THAT IS THE PURPOSE OF LIFE!

Image source: By Dmitry Rozhkov (Own work) [CC BY-SA 3.0], via Wikimedia Commons, for representative purposes only.

Dear Brother, I Choose To Fly And Be Heard And Not Remain A Caged Bird!