It Is Okay To Talk About This: An Excerpt From My Daughters’ Mum

My Daughters' Mum by Natasha Badhwar plunges deep into essential subjects, from parenting and marriage, to faith and self-hood. 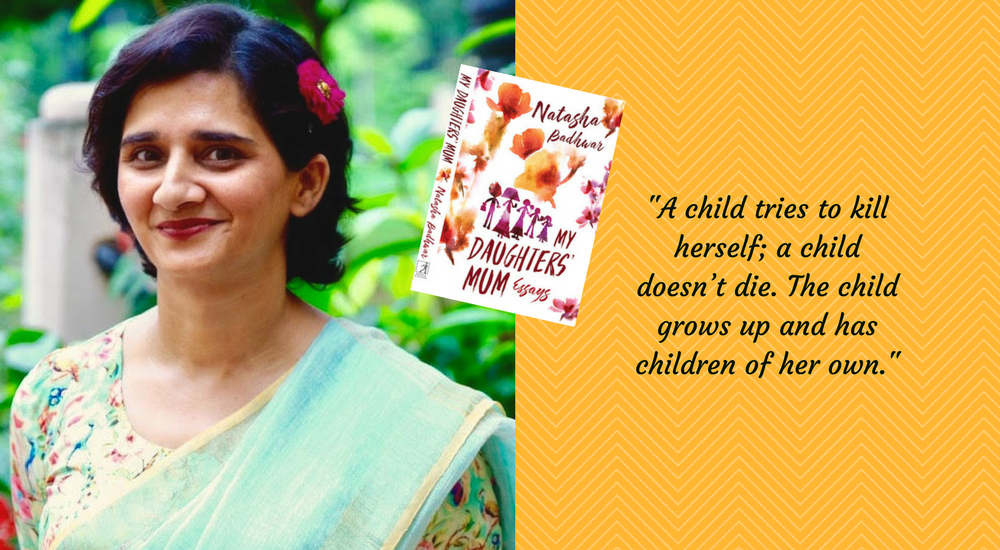 My Daughters’ Mum by Natasha Badhwar plunges deep into essential subjects, from parenting and marriage, to faith and self-hood. Read a beautiful excerpt below.

(And if you are in Bangalore, join us on November 5th, where Natasha Badhwar will be in conversation with journalist Priya Ramani and psychiatrist Dr. Shyam Bhat, talking about ‘Writing To Heal’. Click here to mark yourself as going!)

A story that revisits me every day is what happened when I was twelve-and-a-half years old. Our two older daughters— Sahar and Aliza—are fourteen and twelve right now. Our youngest daughter Naseem is nine.

‘Are you twelve-and-a-half years old, Sahar?’ I asked our firstborn a couple of years ago.

‘Yes,’ she said. ‘Exactly 12.5.’ ‘Yes.’ I showed her my incision-scar. I have forty-five stitches running down the centre of my right arm. It is shorter than my left arm by four inches. ‘I was twelve-and-a-half when this happened,’ I said.

She nodded. I have told my children about my fall from the roof of our home when I was a child.

The truth is, I had jumped. At 5 am on a winter morning in January, I had jumped from the fourth floor and crashed on to the concrete ground below. I had decided that it was better to die than face the day.

I had attempted and survived suicide.

A child tries to kill herself; a child doesn’t die.  The child grows up and has children of her own. Her fears, her guilt, her desire to talk about her suicide attempt— these become a part of the story that haunts her. A story she has to understand.  Memories come back and perch on her shoulder. They take the shape of dreams. They visit as tears.

My mother Sudha is the fifth daughter and sixth child of her parents. There were eight siblings. Her closest sister committed suicide in her early twenties. Her name was Chanchal. My mother talks to me about her. She speaks of the household they grew up in. She was four years old in 1947 when this country became independent and was partitioned into India and Pakistan. Her mother, my Nani, was expecting her seventh child when the family abandoned their ancestral home in Lahore and moved to Amritsar. It took years, decades, generations, for them to feel at home again.

Like most Indian families, both sides of my parents’ family are obsessed, to some degree, with the male child and his privileges. My mother tries to rationalize it. She tells me brutal stories of how other significant adults were mean to girls, but she becomes protective about her own mother and father. They were valiant and fair.

I did not get a chance to know my mother’s parents very much, but my Nani appears in my dreams sometimes. I want to speak to her. I want to know how parents can love their daughters and still not give them permission to have any agency over their lives. I want to know how they can silently reaffirm that girls must have no control over their destinies. It angers and baffles me. I know that Nani won’t have the answers.

I am determined to break the script my grandmothers lived and died by. They were powerful women who did not have the authority to protect their own children. They were caregivers for everyone but they did not have permission to assert their needs and desires. Ammi, my mother-in-law, would show me the way.

There are those who will celebrate the ‘sacrifice’ of women; I insist on calling out abuse.

My father’s mother had three sons. Dadaji, my father’s father, is the only grandparent I really got to know. He lived past ninety. We were both loving and confrontational in our relationship with each other. I defied him in ways that no one else did. We taught each other a lot.

Dadaji took the news of my decision to marry Afzal—a Muslim from Uttar Pradesh—very badly. For a few days, he seemed to lose his grip on reality. He began to hallucinate and became paranoid. We did not know whether he would recover, but he did. When he met my in-laws eventually, he was gracious, soaking in conversations in Urdu with my father-in-law and Afzal. When our youngest child Naseem was born, he called out to her each time we visited, and glowed with happiness when she responded to him.

Raising children and being in love make me vulnerable. I have learnt that vulnerability is not weakness. Recognizing one’s vulnerability is pure courage. It gives me the will to stand up to oppression — to be honest, to confront. It makes me see things with clarity.

My Daughters’ Mum is available on Amazon.in and in all leading bookstores.