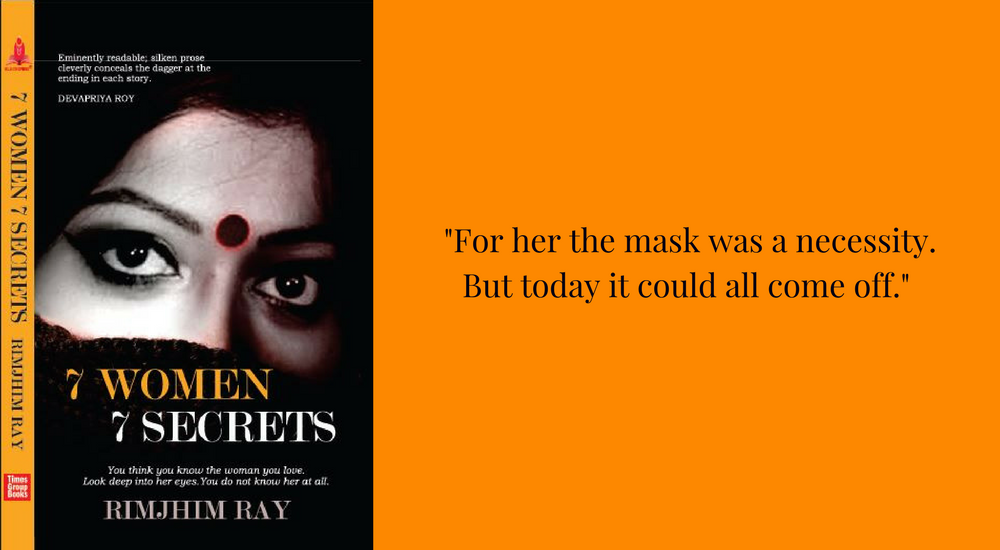 The Mask: An Excerpt From New Novel, 7 Women 7 Secrets

A powerful woman climbing the ladder has something to hide, and much to fear in a world dominated by men…how will this play out? Read an interesting excerpt from Rimjhim Ray’s debut novel, 7 Women 7 Secrets.

‘7 Women 7 Secrets’ is a series of stories exploring the hidden other woman in every woman’s life. The stories are woven around a rich tapestry of characters. The ruthless politician, the cheating activist, greedy malkin, the lethal widow, the fakir’s mistress, the prodigal mother or the half-dead celebrity are all connected by webs of deceit they sometimes spin and sometimes get helplessly trapped in. The book takes you on an intriguing journey into the minds of these women and the men they love and betray, trust and regret, despise and discard. Get your own copy here.

Nalini Patel was nervous. She looked visibly so. Anyone who had known her over the last few years would have immediately concluded that something was wrong, something was very wrong. For the woman was rarely nervous. At 43, she was one of the most powerful women in America’s politics; the part of the president’s youth brigade. She had a meticulous past and a resplendent future. Her win in the Texan governor’s elections next week was a given. Her story was the kind that inspired fairy tales. As the daughter of working class immigrants who had struggled to make a good living she was the embodiment of the American dreams. She was the perfect balance who lived the aspirations of the immigrants and protected the interests of the hard-working, God-fearing Americans. At the meeting with the large Indian diaspora, she talked endlessly of the struggles her parents had faced and her vows that no desi brother or sister would have to go through that kind of trouble again. At the townhall, dominated by red-necks she emphasised that she was a practising Christian. In the meeting with the corporates, she hinted at lobbying for the end of business restrictions that curbed low-cost outsourcing. In her second meeting with the Indian diaspora, she reinforced the hint. In her second townhall with the red-necks she laughed it off, attributing it to misrepresentation by elitist journalists who resisted the rise of the working-class. Her rivals accused her of wearing masks; she privately acknowledged that they were right. For her the mask was a necessity. But today it could all come off. All for a fourteen year old boy who six months ago had not existed in her life. Yet today as her legally adopted son, he threatened to destroy everything that she had meticulously built. Could she let it happen? Would she let it happen?

Nalini sighed. She had a mixed relation with the media. Her panache, her meteoric rise and her chiselled good looks ensured that the media loved covering her. Yet there were journalists who waited for her to fall, waited for the slightest tremor in the Patel camp to notch up the anti-immigration hysteria. They would have their claws out today. The perfect opportunity had just landed in front of them.

Andy read her mind, one of the few who could. In his early thirties, Andy was smart and suave and far ahead in his political acumen than more seasoned pros. There had been talks of a romantic liaison between the politician and her strategist. But Nalini had made sure the rumours were crushed after realizing the news was not going down with her support base. She could not afford the indiscretion. Nevertheless, she reserved a special affection for Andy, a special respect for his judgement. He had warned her against adopting the boy, the boy with an incriminating surname and dubious antecedents. But there were certain compulsions that even Andy was not aware of, certain secrets that she could not tell even him.

The best thing about Andy was he did not want to know either. He was smart enough to realize that Nalini would not have adopted the fourteen year old Muslim boy without a strong compulsion. He had carefully gone over the boy’s credentials. His father had been associated with a subterranean leftist group in India. He had been killed in a police firing in Kashmir five years back. His links to terrorism should have been strong enough for the conservative Ms Patel to not get associated with the son. Yet Nalini had adopted the boy 6 months back while on a hurried trip to India and had brought him to America to stay with her. The news had been cleverly kept under wraps till the foolish little boy steered his drone equipped with high power surveillance equipments into the Dallas police head quarters. As soon as the police picked him up, Nalini’s rivals had their claws out. The electorate too was asking uncomfortable questions on ‘Nalini’s sympathy for terrorism’ as one twitter user wrote.

Nalini had risked her career, her chances in the governor elections for an apparently unknown boy. The mystery intrigued him but he told himself that he did not have to know. The intelligence reports had revealed no connection between Siraj, the boy’s father and Nalini and he would leave it at that. All he had to do was spin a story that made Nalini look good. Which, as the master of spin, he readily had. He would have to make sure Nalini had the story clear in her mind before the press conference began. Nalini’s win was important for his own career too.

“Andy, we have gone over this twenty times. We do not need another rehearsal.” Nalini snapped.

Andy looked up surprised. The mask was slipping.

“By the way there is an anonymous Twitter account which is drumming up support for Mustafa. Personally I think the boy is alright. The police is paranoid. Like most of America. And that could seriously jeopardize your entire political career. Which is why you have to distance yourself from the boy and his family’s left leanings.”

Andy caught the sardonic smile on Nalini’s face before she turned away to face the window. Andy frowned. Nalini was playing the cards too close to her chest. Nalini Patel was an inscrutable woman. Andy was one of the few who could claim to penetrate the mask of political correctness and know her personally. Yet Andy knew that at a certain level the claim was hollow. In Nalini’s world dominated by razor sharp ambitions and clever diplomacy, personal relationships were only acts that she put on and dispensed with at will. Andy was not bitter about the way she had unceremoniously ended their affair. He was not a romantic fool and he understood that given Nalini’s meteoric rise which also cemented his career as a savvy political strategist, it had been a small price to pay. The brief affair had however given him a rare glimpse of Nalini’s ugly insecurities. She was a compulsive insomniac; she would sit up whole nights. She was also given to intense paranoia. The layers of makeup and the cleverly put on act hid her insecurities from the world. A lot of credit also went to him and his team of no-scruples spin doctors. Only this time he was not so certain of creating the perfect camouflage. The queen’s secrets threatened to come out; she seemed to be letting her guard down.

16 Women Draw The Elephant In The Room: The Result Is Utterly Absorbing!