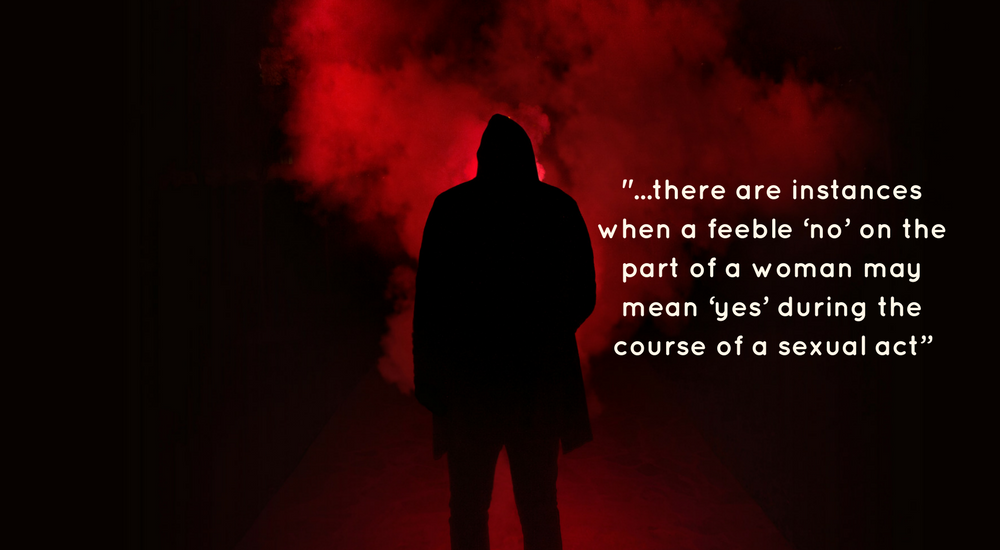 How Loudly Must A Woman Scream For Her ‘No’ To Be Clear To A Rapist? (And The Courts)

The recent verdict acquitting filmmaker Mahmood Farooqui on the grounds of the woman’s ‘No’ being ‘feeble’ is appalling and could have grave consequences for other victims.

In a recent case decided earlier this week, a Delhi High Court judgement said that a ‘feeble no’ could mean yes. The accused, Mahmood Farooqui was absolved of the crime of raping an American research scholar student.

This means that speaking softly can absolve many accused of crimes, provided the complainant speaks in a soft voice. The complainant and the accused were known to each other. Hence, the victim should have screamed no. Since it was barely audible to the accused, he thought she had agreed to his advances and so it was consent, and since she consented, there was no sexual assault and therefore, no rape. Thus can the judgement be summarised.

Noise pollution be damned! Unless one screams, nobody will come to know that somebody screaming is in trouble. And for all you know, the other person, the accused or the perpetrator may be short of hearing. Perhaps, Farooqui is short of hearing and could not hear the no…and the judge certainly could not hear the no. Perhaps, there was lots of background noise and so Farooqui was unable to hear no. And in the courtroom, there is generally  lots of noise, so the judge was unable to hear clearly and misjudged the case. This is blaming the victim for the rape, by telling her that, since, she knew the accused, she should have known better…she should have screamed and said no loudly.

This judgement raises many questions.Will the feeble no be a yes, even in cases where the victim is a minor? Was it so muted that not only a hearing impaired person but also an able-bodied person was unable to make out that a no was spelled out? Since who is short of hearing, unless medically proven is very debatable, were audiometers installed in the place where this supposed crime took place? And how to decide, what decibel of sound is audible enough to mean no and audible enough to signify yes?

And since, we are in the throes of the Beti bachao Beti padhao program, it becomes mandatory to install decibel meters in addition to CCTV cameras at all places, specifically public places like streets, hotels, halls, etc. And this will be part of the Skill India program so that many people can be trained to install and repair decibel meters. The judge deserves all kudos, as he has made it possible for both the Beti bachao beti padhao and Skill India programs to be implemented in such a manner that they compliment each other. It just goes to show that the the executive, the judiciary and the legislative arms of the government are completely in agreement with each other!

Last week, a  girl was molested on the BHU campus and the authorities took no action. And when the girls protested by sitting in dharna, they were lathi charged. The BHU Vice Chancellor has said on record, “Security for boys and girls can never be at par, all these rules are for their safety, all in favour of the girl students.” And BHU is of opinion, that there was no molestation…only ‘eve teasing’. If what is known commonly as eve teasing goes unchecked, it will turn into molestation and molestation left as such, without any complaints will transform into rape next. In any case, eve teasing is a crime under the Indian Penal Code ( Section 509…Insulting the modesty of a woman  ) and punishable  with 3 years of imprisonment and fine.

In other words, the BHU says that men can scream loudly to supposedly eve tease and/or molest while if girls scream in dharna, that is unacceptable. But to be fair to the BHU, the BHU incident happened before the Delhi High Court gave its judgement.

BHU is shaming the victim by saying that unless girls are in, they cannot be secure. Oops, the BHU security cannot ensure the safety of girls who are inside the BHU campus, though outside the hostel. The next step will be that, classes will be held in side the hostel.

It is alleged that girls in the BHU are allowed to be out till 8 pm while boys can be out till 10 pm. Even libraries are open for boys till 11 pm but obviously, since girls have to be back in hostel by 8 pm, they cannot use the library beyond 8 pm. This makes a mockery of PM Modi’s Beti Bachao beti padhao program in his constituency, Varanasi. Even internet connection has been provided to the girls hostel just two weeks ago, while, boys have had internet facilities much before that.

If discrimination is so rampant, equality can never be achieved because mindsets are hard to break. The VC’s remarks are an indication, that when the person at the top is a male chauvinist, what trickles down will be sexist.

So what can be done to prevent or at least try to curb such incidents of violence against women?

As  actor Renuka Shahane, has stated in her status update on Facebook, “…it would be wonderful to put a curfew of 6 pm on men students for a change. This might make it safer for women students. Worth trying out at least once. Worth putting the onus on men students at least once, as an experiment. If the results are good we can replicate it elsewhere as well…..” (It has been said that when terrorism in Punjab was at its peak in the 1980s, violence against women had reduced as even men were afraid to go out after sunset, for fear of terrorists.)

What needs to be done to stop blâming & shaming victims of sexual violence? People need to be trained to be sensitive. G.S.Bajpai & Mehak Bajpai have put it so succinctly, “…..The spirit of the UN Declaration of Basic Principles of Justice for Victims of Crime and Abuse of Power, 1985, needs to be implemented. This can bring victim-orientation to our laws…….

It is high time that our systems should look to enable the participation of the victim at various stages of the trial. For instance, the victim needs to be heard at stages like the framing of charges, discharge proceeding, bail hearing, probation hearing, sentencing and compensation. The victim would then be in a position to factor his/her experiences into the criminal justice process without adulteration of any kind. A ‘victim impact statement’ is also a mechanism in many countries to hear the victim’s views in a criminal trial. If effected, these measures have a potential to improve the quality of justice for victims of sexual crimes.”

Victims should have support groups who assist them in the case and even afterwards. The police officials and the judiciary need to made more subtle in handling such cases to do justice to the victims as they are the ones who have been violated physically as well as mentally. And it is, never the fault of the victims.