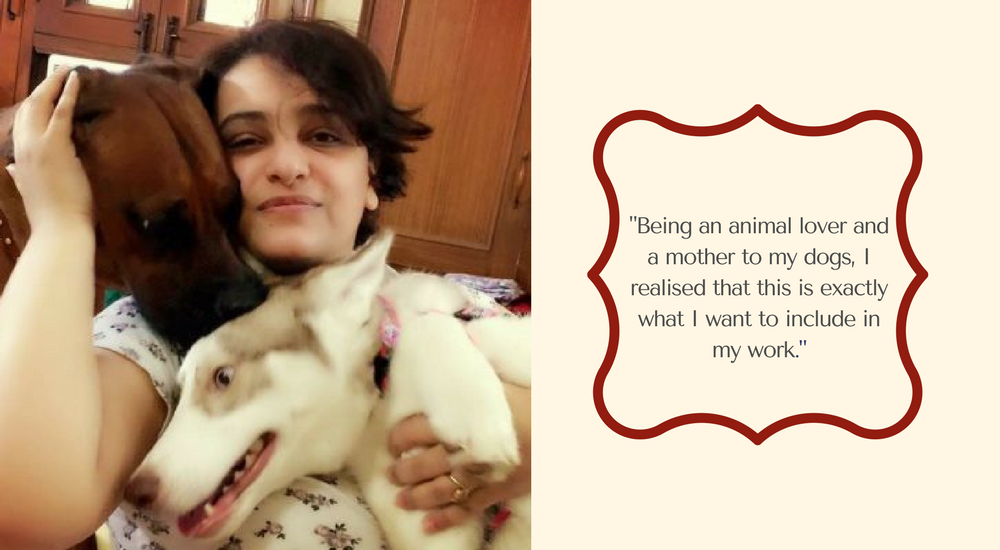 Aastha Bahl’s pet fashion label is all about her love for animals – combined with a knacky fashion sense and knowledge. Pet lovers, take note!

The term ‘fashion designer’ automatically brings to mind the image of a person who has a rich sense of style and dresses up people for red carpet events. Well, in fact, it means so much more. And then there are some that realise their passion and love for something is far greater than what the world deems acceptable as part of an industry.

Aastha Bahl is one such individual who decided to pursue what she knew best – her love and passion for animals and weave that into what she has learnt from the fashion industry.

A graduate from National Institute of Fashion Technology (NIFT), Aastha has been a part of the Indian fashion industry for more than a decade. She has worked with illustrious designers and brands like Shantanu-Nikhil, Aki Narula and Rina Dhaka. In 2004, she went on to create her own label, Mistletoe. She debuted at the Lakme Fashion Week in 2008 and later at the Wills Lifestyle India Fashion Week.

Aastha says, “Fashion was never something I thought I would move into. I had thought of taking up English Honours or perhaps Architecture. I had jaundice during this entire decision making time and was hospitalized. NIFT entrances were to take place and that is when my brother suggested that I should give this a shot. I got through NIFT as well as Pearl Academy. I ended up topping in the second semester and was consistently in the top five. Within 11 days of graduating I landed a placement and there’s been no looking back since.”

With start-ups and working for one’s self being the new deal, Aastha spoke about launching her own label ‘Mistletoe’ much earlier on, in 2004. “I had buyers that time and was a sell-out designer with them but with the sealing drive in Delhi I lost my buyers. I decided to apply for Lakme Fashion Week with my Mistletoe label post that and I got through. Two seasons later I came to Wills. I did a total of eight seasons in all – four shows and in four seasons I had stalls.”

It takes time and introspection for an individual to realise that perhaps they don’t fit in a particular spectrum which is what Aastha talks of as well. “It was becoming an unhappy place for me where I felt that either I didn’t fit into this side of fashion or perhaps my work was not being understood with the intent I had when creating it. I finally shut down my business in October 2015. I wanted to do something that I loved and was passionate about and not just what was considered the known path and the way forward.”

Aastha launched a new label which goes by the name ‘Stars and Snowflakes by Aastha‘ and the official launch was at the PetFed in December 2016. “Being an animal lover and a mother to my dogs, I realised that this is exactly what I want to include in my work,” she says.

Red Paws Rescue, a non-profit organization in New Delhi which aims at the rescue and rehabilitation of stray and abandoned dogs helped Aastha connect to those who were specialising in the correct food plans for dogs. She mentioned, “My three dogs – Lumi, Kali and Star are on such meal plans. I knew that if I was so particular regarding what I wanted for my dogs, so would other people with pets too. And not just food but providing their dogs a range of things which unfortunately are not easily available in India.”

Currently her label carries jackets, collars, leashes, shoes, charms, brooches, raincoats, rain boots etc. She also does memory foam mats, beds and pillows. Memory foam has padding which absorbs shock while providing comfort and protection.  Aastha believes that “Using memory foam in beds and pillows for dogs gives them better comfort by distributing body weight evenly. It is imported and expensive – however I ensure that the memory foam used in my products is pure.”

Stars and Snowflakes has ready stock as well as can be customized depending upon the client’s need for their pet. She further spoke of what she is working on currently. “The next set of collars for my label are coming from Kenya. A village there engages in ‘maasai’ beadwork and they stitch intricate patterns of these into the leather. I am always on the lookout for something that I would like for my pets and aim to provide that to other pet owners through my work.”

She signs off by saying that she aims to establish herself in the doggy product industry in India and make a difference in how one’s pets are provided the best care.

My afternoon with Aastha provided an insight into her world. Talking of her mom being her biggest supporter to watching her face light up when she spoke of her babies – the three doggies. A meeting that almost stood cancelled with her tending to one of her babies being ill and going back and forth from the vets’. However she stuck it out and showed up like a worried mother would, keeping her commitments, all the while ensuring that she gets back immediately to take care of her pets.

Aastha decided to take her expertise and experience from the fashion industry and mould it in a unique and creative form of designing, with love at its core. As Robert Frost famously put into words, “I took the road less travelled by and that has made all the difference.”