Disagree With Arundhati Roy, But An MP Urging Violence Against Her Is Disgraceful

The recent act of actor and MP Paresh Rawal, tweeting violently against writer Arundhati Roy, has made news and forced us think about the repercussions that such comments have. 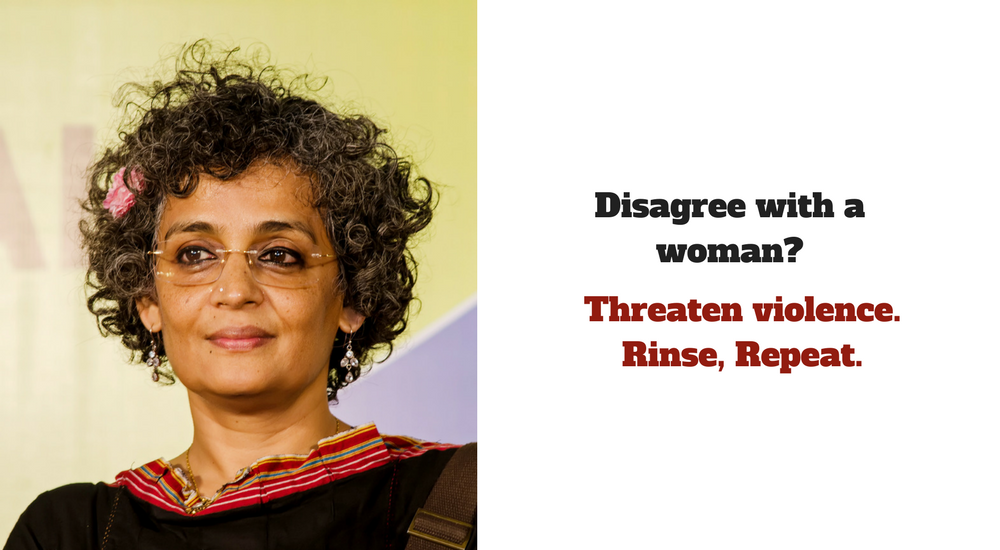 The recent act of actor and MP Paresh Rawal, tweeting violently against writer Arundhati Roy, has made news and forced us think about the repercussions that such comments have.

Since a few years, now, we have seen a pattern emerge in the social spheres. Whenever somebody states their opinion publicly, which may not necessarily be in sync with the ‘collective conscience’, there emerges a toxic mass of hateful comments which makes a person doubt their decision to ask questions and speak freely. And this doubt is what leads to defeating the purpose of a democracy.

Hate comments online are now accepted as a normal way to express disagreement (which is appalling but has now become usual), but what about the times when these comments cross the levels of lewdness and become extremely violent in language? We personally attack people, instead of disagreeing with their opinion like a civilised human being. And when people, who are supposed to be the ideals and upholders of the law, participate in such acts, does it not make you question the people we put our faith in?

There is no excuse for hate comments, but whenever a woman is involved in the scene, the violence just seems to surpass itself to an even higher plane. Rape threats, body shaming, obscene comments are just the surface of the minds of the absolutely vile people who do this.

The most recent proof of this is the actor and MP Paresh Rawal, tweeting that Arundhati Roy should be used as a human shield to army jeeps when she, apparently, made statements about the army issues in Kashmir. Special emphasis on the word apparently because according to a recent report by the Wire – she never made any such comments. The amount of reaction that her supposed comments got is totally absurd. Why is it that we have to respond in such an extreme way to any piece of news we hear, without even checking its credibility? The mentioned tweet by Paresh Rawal has been removed by twitter but it seems that people do not realise the damage it has done, and it is sad to say that he doesn’t seem to have learnt a lesson. It is sickening to see and read the whole tweet thread, and honestly, I do not understand how all those people find the humour in these words.

This is not one unique instance. Does the name Gurmeher Kaur ring a bell? The girl who lost her father to war and posted against it, was very conveniently labelled as an anti-national and sent rape threats. She had to eventually leave Delhi due the amount of threats she was getting. It is okay to not agree with what one says, but is this really the way, where we try to shut them up with threats? How is it that we do not see the wrong in all this?

It makes me sad to see the amount of hate people have bottled up in them, which is spewed onto strangers who had the courage to speak their mind while these people just sit behind screens and reduce what could be constructive argument to pure venom in less that a hundred and forty characters.