Uttar Pradesh Chief Minister Yogi Adityanath’s comments on women may be in the garb of 'Indian culture', but there is nothing particularly Indian or even Hindu about them. 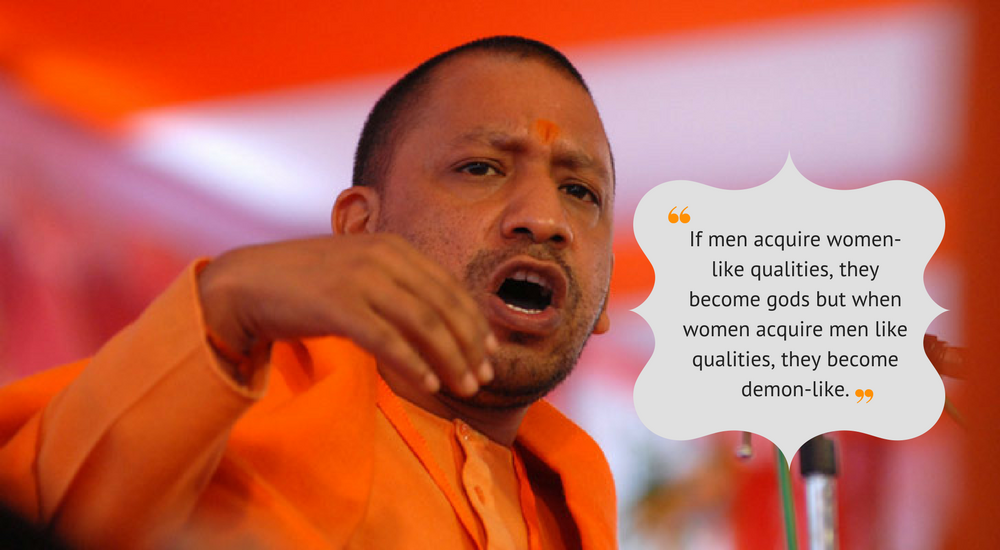 Uttar Pradesh Chief Minister Yogi Adityanath’s comments on women may be in the garb of ‘Indian culture’, but there is nothing particularly Indian or even Hindu about them.

Yogi Adityanath’s ascendancy to the position of Chief Minister of Uttar Pradesh has undoubtedly sparked off much debate and conversation. This piece is not a commentary on the many trappings of politics. It is not an attempt to evaluate left-versus-right wing politics, but rather is an evaluation of a leader’s credentials and statements from a feminist lens.

A recent Times of India article bears the headline, “Women not capable of being left free or independent,” attributing the quote to Yogi Adityanath. His perspective on women can be gleaned from his website. In this article, I attempt to unpack these views and draw conclusions on what it could mean for the women in the state.

Setting the stage for his comments is the belief he endorses, which is that ‘Western feminism’ should not take over Indian culture. His words to this effect were, “…the thoughtless storm of women freedom of the western world will drive them to an even more disastrous condition and it will hamper the creation and stability of the home and family and prevent the glorious rebuilding of the nation and motherland.”

While I personally don’t believe that culture anywhere can be homogenized across a territory, and that religion and culture are not the same thing, I will hold those assumptions to be true to unpack Yogi Adityanath’s ideas around women. This means, therefore, that in his books, there is such a thing as Indian culture, and putting two and two together, that culture is rooted in Hinduism.

Is this the same Hinduism that acknowledged the fact – not idea, fact – that women and men were indeed equal? Unless there’s an #AlternativeFact version of the Vedas, it must be known that Hinduism acknowledges that there can be no creation without knowledge, explaining it in mythology through how Brahma cannot function without Saraswati; that there can be no sustenance without wealth, which it explains through the equal coexistence between Lakshmi and Parvathi; and that there can be no destruction without power – ergo, no Shiva without Shakti. It also goes a step further to mention that the yoni and the linga are a united representation of non-duality. I’ll go one step even further and say that Shiva is a Yogi and just leave that here for you to think about. 100 Days Of Anti-Romeo Squads: Any Fire Behind All The Smoke? In one article, Yogi Adityanath references that women need male protection from birth to death and that they have an energy power (urja) that should be regulated or controlled, lest it wind up becoming worthless and destructive. Only ‘controlled’ power of women will foster the birth and rearing of great men. In so saying, Yogi Adityanath makes no bones about vitiating exactly what he considers supreme. If the Vedas are indeed fount, I’m speaking the same language here when I quote the Rig Veda, in Book 5, hymn 61, where it is written, “The wife and husband, being equal halves of one substance, are equal in all respects, and should therefore join and take equal part in all work, religious and secular.” Whoa, Yogi Adityanath! Did you look at that? Western Feminism was in the Vedas all along!

Going against the grain of what the BJP has said in the context of women’s reservations, Yogi Adityanath has gone on record to say that there should be an assessment of the impact of the quota in gram Sabhas, panchayats and local bodies on the primary role of women as mothers and wives. But hold your horses, Yogi Adityanath, because there’s a whole paragraph in the Yajur Veda to contradict you (20.9): “There are equal rights for men and women to get appointed as rulers.” This augments the Rig Veda’s original mention among a range of other rights for women, which include even the right to get into the army, and be providers of wealth, food and prosperity.

The Atharva Veda, in Book 7, Verse 38 and Line 4, [7.38.4] augmented by 12.3.52 also says that women should take part in legislative affairs and put their views across. The Atharva Veda, in 14.1.6 also goes onto say, “Parents should gift their daughter intellect and knowledge before she leaves for a husband’s home. They should give a dowry of knowledge – which meant that a girl should be encouraged to ignore external materialism and gain foresight and wisdom, which will make her a provider of wealth for the skies and the earth.” Au contraire, Yogi Adityanath mentions obscurely, a reference to the ‘shastras’ that claim that women need to be protected. He references the Shakti Swarupa – conveniently forgetting that it stands for the Goddess who recognized her own power, and not a bizarre, warped notion that reasserts patriarchal thinking.

Yogi Adityanath also went on to warn against the “inherent dangers in making women like men.” He quotes texts and lays claim that “If men acquire women-like qualities, they become gods but when women acquire men like qualities, they become demon-like.” He alludes to gender roles and narrow-minded thinking that feed into patriarchy. My palms itch to introduce him to Chimananda Ngozi Adichie and her iconic line, “Cooking does not come pre-installed in my vagina.”

The Yajur Veda, in 16.44, says, “There should be an army of women. Let women be encouraged to participate in war.” Ready for the wave of Vedic feminism, then?

Manohar Khattar's comment on being able to bring back Kashmiri girls, revealed the regressive mentality of several men in India. Does consent even matter?

Manohar Khattar’s comment on being able to bring back Kashmiri girls, revealed the regressive mentality of several men in India. Does consent even matter?

Since the moment Article 370 was scrapped off, social media has been flooded with sleazy videos and memes celebrating that apparently, men from other parts of India will finally be able to marry Kashmiri girls. (Newsflash, they were always able to).

Recently, Haryana’s Chief Minister (CM) and BJP leader Manohar Khattar played his part in a controversy after he “made a joke” saying, “Kashmir has been opened, we can bring girls from Kashmir also.” He made the statement while speaking at an event for the Beti Bachao, Beti Padhao campaign event in Fatehabad, Haryana.

In June of 2017, a minor girl from Unnao district in Uttar Pradesh alleged that she had been raped by BJP MLA Kuldeep Singh Sengar, his brother and other people. However, the case came into the limelight only when she attempted to kill herself outside Chief Minister Yogi Adityanath’s residence on April 8 2018. Justice has still not been served though there are protests going on in support of her case.

So many MLAs have been accused of sexual harassment or rape just in the past few years. What does one do when the people who are supposed to be our representatives and work for our well-being turn against us like this? It is important to at least keep calling these sexual predators out and reminding ourselves of who they are.