While questions over her probity (and of those close to her) lingered over her political career, one cannot help but applaud the late CM, J.Jayalalithaa for her pro-women policies in a sea of misogyny. 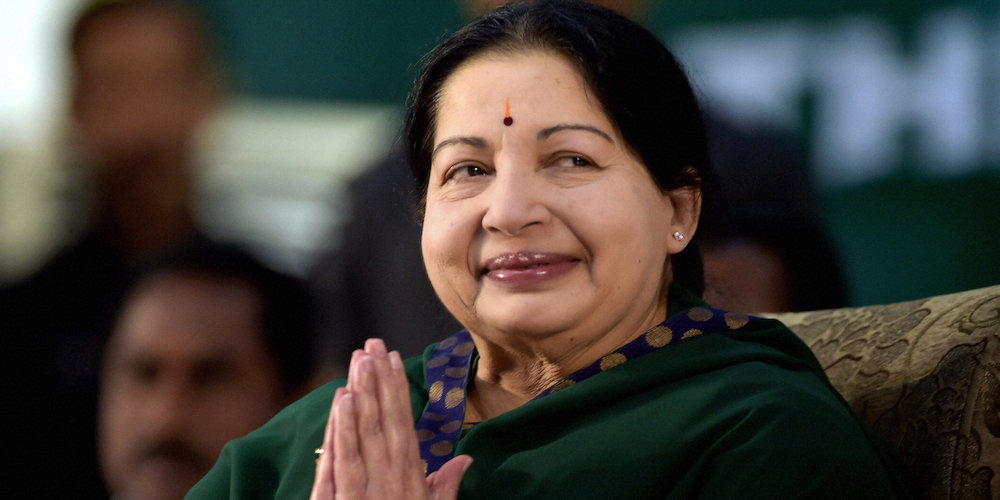 While questions over her probity (and of those close to her) lingered over her political career, one cannot help but applaud the late Tamil Nadu CM, J.Jayalalithaa for her pro-women policies in a sea of misogyny.

I am on track with my routine, now on my morning walk. Chennai is a ghost town; the emptiness of the roads shock me doubly when I stand at the four road junction at Chamiers Road and looked right ahead at the bridge that connects yonder towards Mandaveli.

I turn to walk towards the Boat Club road, and find a yellowed portrait of Amma, emblazoned on a wall. She is smiling in this artistic rendition of her memory: the artist long forgotten, but the leader, immortalised. I look for the familiar faces I see every morning, and I find only a handful. We don’t smile, we look each other in the eye, grimly, acknowledging this heavy pain that has descended upon us.

My awe for Jayalalithaa is not blind; I never understood the sycophancy she encouraged, nor did I appreciate the facts of the corrupt dealings to her name. But I admired and still admire the lady – for courage like that is something no ordinary person is capable of. All of sixteen, Jayalalithaa was swept up into the world of cinema, acting opposite MGR in a Tamil film. She harboured dreams of becoming a lawyer, but those dreams set sail, leaving her on the banks, looking misty eyed at them.

Her audacious tenacity defined her: be it as the teenager that didn’t stand up for the veteran actor each time he entered a room, or as the feisty actress who built her cache of talents through hard work and training, or even as a leader. Her articulate and prolific use of English, Hindi and Tamil made her carve a niche among different communities: and what she had to say, packed with intellect that could give anyone with a bunch of hard-earned or big-brand degrees to their credit a run for their money.

After MGR’s death many Decembers ago, she sat by his head, unflinching, only to be pushed, shoved and jostled, pinched, and eventually forced out of the way in full public view. That formidable resilience would do her much good, when years later, she would face the ignominious manifestations of misogyny and patriarchy.

For Jayalalithaa, her identity had many attributes that suggested why she would stick out like a sore thumb in the terrain she was swimming in, and in the terrain she was up against. She was a woman. She was unmarried. She was an upper-caste woman. She was an actress. As a woman, she was up against the patriarchy. As an unmarried woman, she had no ties to a man, enough to make her a sitting target for misogyny. As a Brahmin, her tag was an anomaly in a party that was anti-class and Dravidian in its affiliations. As an actress, well, she was an ambassador of fluff and wasn’t necessarily going to be given space where intellect thrived.

And yet, she braved it all. In 1989, she raised her points in opposition to Karunanidhi when he was putting the budget forward before the house. Without being intellectually debated, she was nearly disrobed – her saree pulled, her hair tugged and verbally assaulted. She fought it: wearing plain sarees, discarding all need for jewellery, and turning her childhood moniker “Ammu” into “Amma” – shedding all insignia that would inform the objectification and sexualization of her person, and becoming a mother – arguably her ticket to shutting misogyny down at that point in time.

She set sail a slew of policies that put women back to the forefront: whether it was depositing Rs. 5000 in the account of every girl child born in the state to end foeticide and infanticide, or in promoting the education of young women and girls through her gifts of laptops, or putting food in the stomachs of the hungry through her Amma Canteens. Her administrative skill came to the forefront all the time: a day after the tsunami, the streets were clean, life back to normal. After the floods last year, the feared epidemics were at bay.

There was a downside, too: disproportionate assets and endorsing her identity in the forefront of giving aid, and the mismanagement of the dams during the rains that led to the floods. And yet, despite all of it, Jayalalithaa stood her ground, holding fort for a good many years against a predominantly male domain, not backing down despite all the nefarious antagonism she faced.

Jayalalithaa led a fractured faction of the then split party, and continued till her passing. Arguably, her leadership might signal the end of an era not only in the political history of Tamil Nadu, but also in the history of the AIADMK.  She did not lead her life tied to anything but her everyday commitment to keep moving, no matter what she faced. She took the patriarchy on, every single day. She fought strong in an ocean of misogyny, and in her own way, shut it down.

The silence that rings in my ears as I walk back home only reaffirms it.