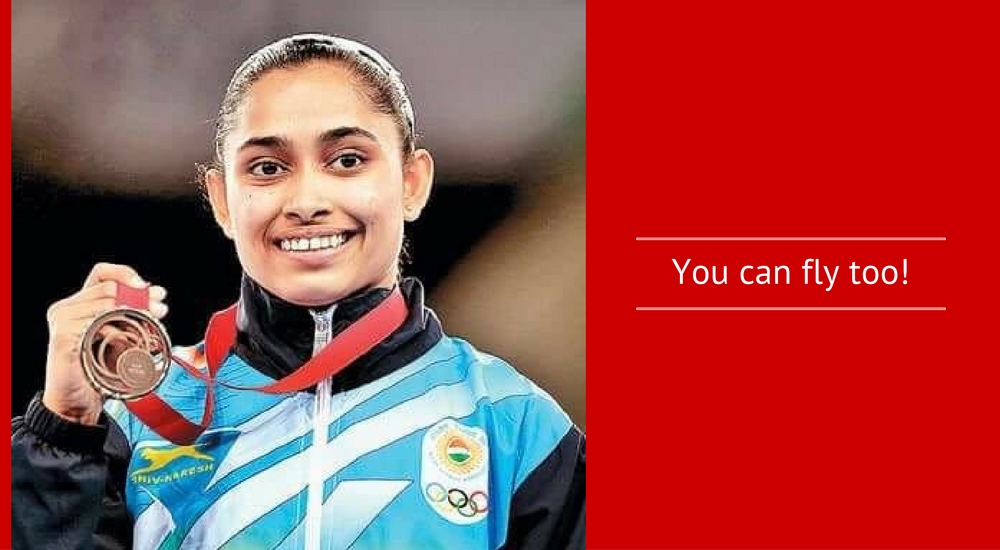 Dipa Karmakar inspires India’s women and girls to strive for big things; her very participation at an Olympic event is cause for cheer.

I was glued to the television screen, taking in the smallest details of her move. It was replayed in slow motion – swirl, swirl and then a sound ‘thud’. She landed through the sand, knees bent and a balanced stand up, and the crowd went crazy.

She waved at the crowd and rushed towards her coach. He patted her back and the score board displayed the eighth rank. Yes, yes! She had qualified for the finals. I was screaming and jumping with excitement, as if she would hear me and wave back to me.

My son looked at me and seemed puzzled. The expressions on his face were, as if  he were asking these questions. “Maa, what happened?” I told him, “See dude, she qualified for the finals. Does she not inspire you?” In return he threw his hands in the air and chuckled and started babbling out of excitement. My son might have understood that his mother is happy about something. This is the way we communicate.

I turned back towards the television, and there she was, the spellbinding personality, returning the acknowledgment with a humble gesture. I was telling myself, “You are a diva, Ms. Karmakar. I behaved in this hyper fashion for another half an hour and to top it, my son accompanied me too.

And why should not I? After all, Dipa Karmakar is the first Indian gymnast, female or male to compete in any Olympics in 52 years.

When I was drained out of energy, I looked for something edible. I saw my son chasing his circlet rattle and falling every time trying to catch it. I tried to pull myself out of the enthusiasm and went to boil some tea. I finished the other house chores, played with my son and sang him a lullaby to sleep.

I was lying next to him and soon I started daydreaming. It was different this time, this dream of my childhood. “You are so clumsy, so careless…” this voice came from afar and soon a defensive voice echoed, “she has wheels in her legs, she just tries to do things fast…” and then she winks at me. I returned her smile with a grin and start running after the glowworms, my favourite thing to do. I laughed aloud and flapped my hands and flew…Maa, see I am flying!

My yawning son brought me back to reality and I took him in my arms and bribed him to sleep again with a lullaby. I looked at him and thought, “He will fly on wheels one day…”

I always wanted to learn skating but could not accomplish it. I killed my wish unlike others who went ahead. “Education only matters, games will take you nowhere.”  I could not sleep that night, as I kept thinking of my skates. It was midnight when I woke my husband up, and narrated to him my day, my dream. He requested me to sleep and promised to discuss it the next day.

The next day, when I returned from my walk, a small piece of paper was fluttering on the table. It was an admission form for skating school and there lying, was a note too. It said, “I wish our son learns to fly from the best teacher.”

Wiping my tears away, I told myself, “Thank you, Ms. Gymnast, you have made my dream come true and a belated happy birthday to you.”

Mark Aug 14 On Your Calendar. Watch Gymnast Dipa Karmakar As She Creates History