"The waves had claimed her." A story of love, loss, and grief that yet has a dreamlike quality. 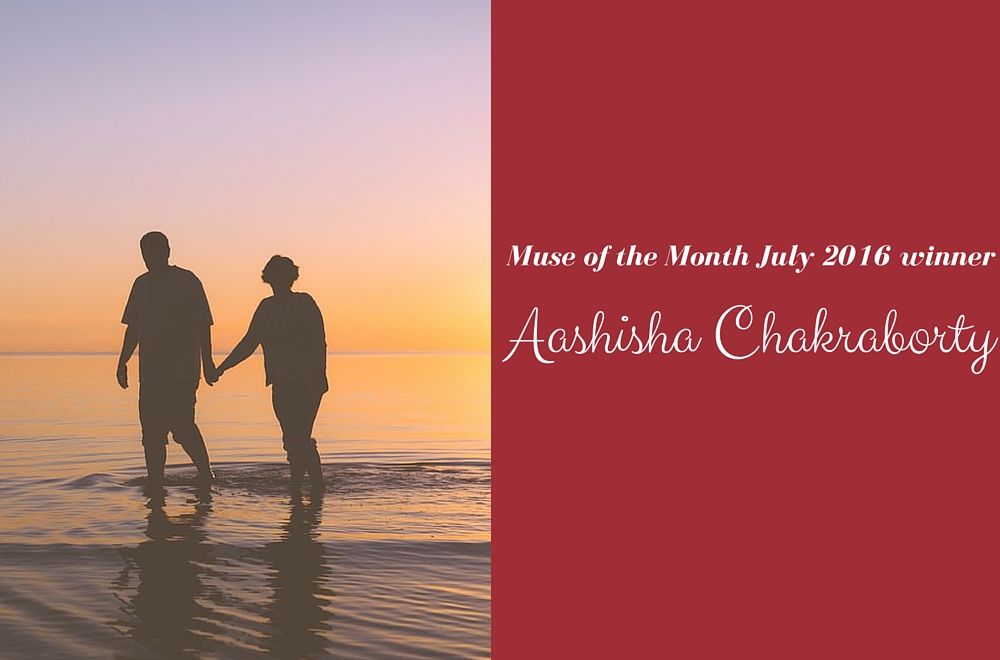 “The waves had claimed her.” A story of love, loss, and grief that yet has a dreamlike quality.

Here is the third winner of our July 2016 Muse of the Month contest, Aashisha Chakraborty.

‘Dreams have a strange beauty, no matter how terrible.’

He could hear them every night. The splashes, the swishy-swish of the waves, the wild waves, wild beyond imagination.

He had learnt to love them both. The blitheness of her manner and the insouciance of the tides. He loved the brief touches of water that splashed across her feet and got them wet. She would pull up her jeans up to just below her knees. He sometimes removed the salt from her legs with his hands. She was usually drowsy by then and he knew she didn’t notice much. But he did. He saw her face lifted up in a slight smile towards the setting sun. He could feel her beside him, spread out on a mat they often brought with them. They barely spoke.

But he was always aware of her presence. Acutely so. He knew when she moved and how. He could feel how the winds and the air around them changed. As if reoriented. Things changed when they were around her. Everything looked a little different. Especially when she wasn’t there. Everything looked a little different. A little displaced. A bit distorted. Strange and unfamiliar. Her absence had dented the air around him permanently. Silenced the whispering winds.

And yet he could hear them every night. Those beautiful billows…the froth preceding their arrival…and marking their departure…clinging to their bodies long after the sea had receded.

He had never loved anything so much as the sea. Until the day he met her.

The years they had shared had been cut pitifully short, her laughter abruptly silenced, her life unceremoniously snatched away.

But he saw her everyday, just as he saw the breakers, turning from tranquil to tempestuous. He saw them every single night, as vivid in his memory as if it had been yesterday.

The waters took her away. The waves had claimed her. They called it the tsunami waves. But he knew that his life had been wrecked by a greater tsunami. A tsunami of grief. A tsunami that left him empty. His angel had been washed away. Completely. She was obliterated from his life. Forever.

He woke up screaming, the way he did every morning since the fateful day. But nothing changed. The dream was the same. And she was gone. Like a wraith that had never existed. Like a story that had never come true. Like a dream that was at once beautiful and terrible in its dolor.

Aashisha Chakraborty wins a Rs 250 Flipkart voucher, as well as a chance to be picked one among the 10 top winners at the end of 2016. Congratulations!