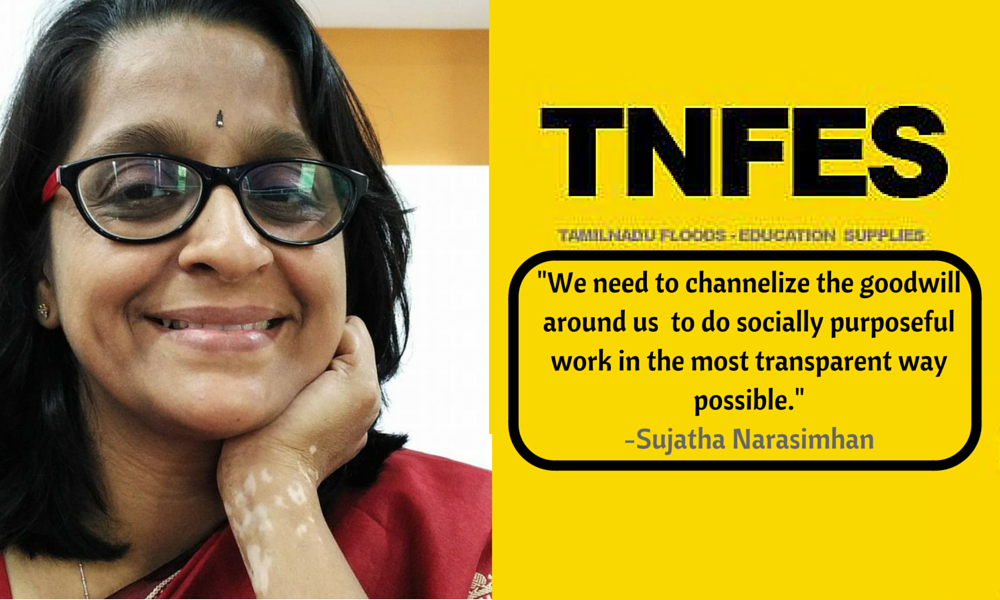 Here is the story of Sujatha Narasimhan, known for her determination and a never ending passion to help children after a natural calamity.

No one needs an introduction to the dreadful Chennai floods in November-December 2015 that took an entire nation by shock! The entire city was flooded so much so that it was difficult even for the relief team to reach some areas and offer help on site.

I remember myself glued to the TV to see the updates every now and then. I wanted to help in someway too! Being in Bangalore there was not much to do than to contribute in my own small way for the relief and was checking on units where the relief was pooled to be carried to Chennai.

That is when I got to know that one of my friends, Sujatha Narasimhan, who is a native of Chennai and resides in the same apartment as mine, was gathering supplies to be sent. I figured that as Sujatha is from Chennai and has her own parents residing there, it must be natural for her to give a helping hand.

However, what I thought was not even close to what she is doing today and her work did not stop just there. Sujatha recalls, “It was horrifying to see an entire city inundated. Initially, I was searching for my own family members who were untraceable. That led me to find a number in Bangalore which was used to coordinate rescue operations. I thought, I could help others reach out to this helpline and gave my number as a contact for those who couldn’t find a way to reach their loved ones or the helpline. I fielded hundreds of calls over the first 4-5 days after the floods and passed on information to the helpline. But, this was not enough. I felt like I needed to do more.”

Roots of her inspiration

Sujatha is an alumnus of IIM Bangalore and Thunderbird Global School of Business, USA. She has worked in advertising, telecom and the development sector in the corporate world and finally with Save the Children, an International Child Rights Organization.

She is very passionate about two causes – children and cancer and a strong will to help others has its roots in her own family. Sujatha says, “I am the only girl child of my parents with two brothers. My grandfather died of cancer and my grandmother lost her vision at the age of 83 both of which left a deep impact on me and inspired me to do my bit for social work.”

It shows her passion as she has raised money for Cancer Research at her own wedding and also volunteered at the children’s and women’s ward at the Cancer Institute, Adayar, Chennai. Here is a picture of her with Dr. Shanta, head of this Cancer Institute and a Padma Vibhushan awardee this year, whom Sujatha regards as her “Personal Hero.” 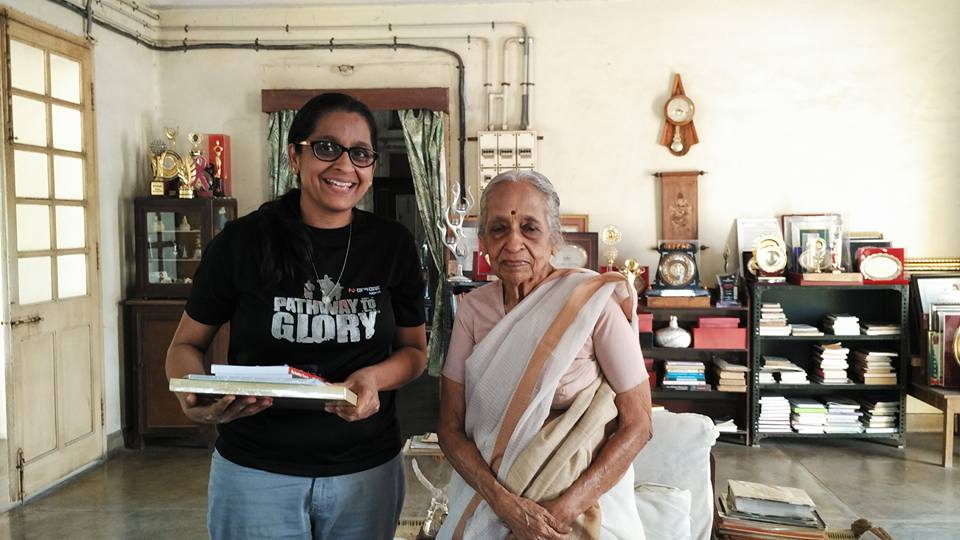 Sujatha adds, “It is important to realise where one’s passion lies and work further along that. Social service and volunteering looks very idealistic from the outside but not unlike any other vocation or profession, this also involves dedication, putting in long hours and most importantly, not giving up, despite the huge odds faced and circumstances beyond one’s control.”

TNFES stands for ‘Tamil Nadu Floods Education supplies’ and is a Facebook group to help schools and students in Tamil Nadu.

Sujatha recalls, “I started TNFES on December 08 2015, about a week after the floods happened. Honestly, I had no idea on what I wanted to do except for a burning desire to be part of any effort to rebuild the city. It was a very quick and steep learning curve but eventually, we were able to balance between what we wanted to and could do.”

She adds, “During my stint with ‘Save the Children’, I have worked on issues including children’s education and rehabilitation efforts in natural disasters in Kashmir, Bihar, Orissa etc. While the city and its people were busy focusing on rescue and relief, my being in Bangalore helped me think about the long term and zero in on the rehabilitation. While there are many facets to it, I married my experience in ‘Save the Children’ with regards to education and disaster relief and my long term interest in helping children.” 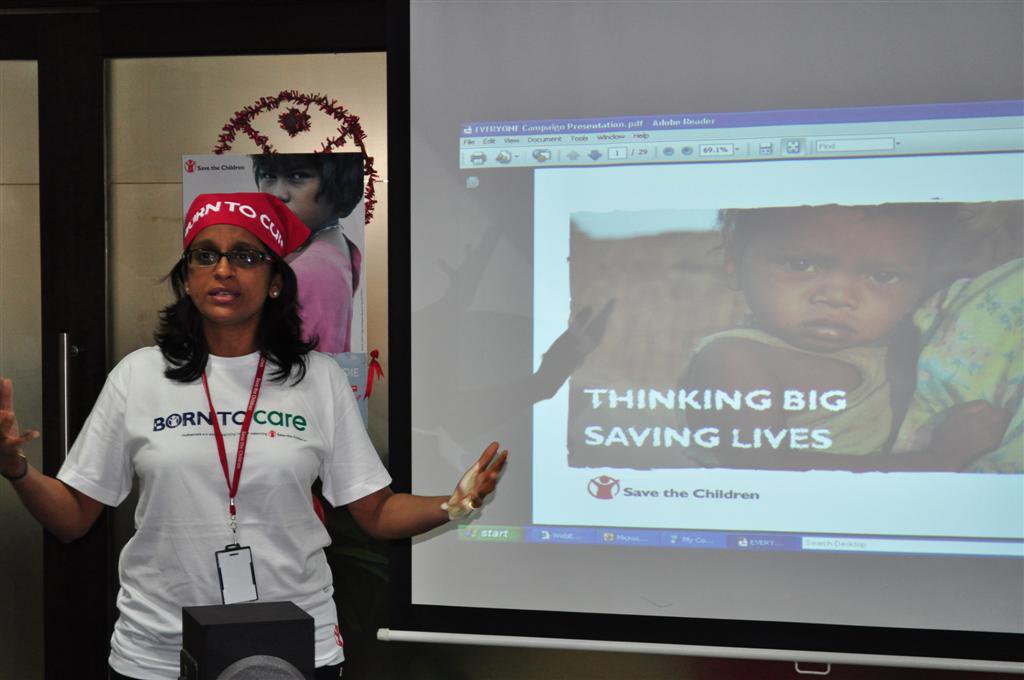 Sujatha’s team mainly consists of different volunteers from across the globe. She says, “Sridhar Venkataraman, who is a co-founder is someone I had known only online and I met him for the first time only 3 weeks after I started TNFES. In the initial phase, we had volunteers from Bangalore (somebody other than me), Canada, Switzerland and Chennai who brainstormed on the direction and actions to be undertaken.”

She has IT professionals, financial advisory, self-employed, etc. and even college students as volunteers. Apart from volunteers working directly with schools, they also have local clubs, educational institutions, companies etc pitch in with helping specific projects in schools. She adds, “The opportunities to help in schools are limited only by imagination.”

Also Sujatha adds, “There are others who support us in the background advising us on legal issues, providing inputs on building construction, technical knowledge on building toilets and drinking water etc. It is hard to figure out how we all came together but it is our good fortune that we did.”

How her team chose a particular school to help with?

The initial relief that her team provided was by giving books and educational supplies, as it was the easiest and fastest way to reach the students. Though they wanted to help college students as well and were able to tie up with Pledge-A-Book club of IIT Madras, given the limitations of volunteers and money, they narrowed it down to only schools. They also realised that there were not many takers in fixing infrastructural issues and so TNFES decided to shift attention to that in the long run

Sujatha recalls, “Many schools faced a lot of damage but they also served as relief camps in the aftermath. Therefore, the schools were not ready to receive children who were returning back after a couple of weeks. I spoke to a few NGOs before starting TNFES but they all had their task cut out, barring a few talk about helping schools but no single person or entity could possibly cover every school. So, we decided to pitch in there.”

Sujatha says, “I relocated to Chennai within a week of starting TNFES. I stayed there for 6 weeks, being on the ground, setting a structure in place. I have worked onsite at the first school, where we cleaned up the premises and then restored the drinking water fountain, with the help of Chennai Trekking Club and a TNFES donor. Those 6 weeks helped bringing a lot of volunteers together, meeting them, and coordinating a lot of the ground work. Later I moved back to Bangalore and since then, I have been working remotely with occasional visits to Chennai. I take care of the fund raising and any media/PR related activities, which don’t require on-site presence.” 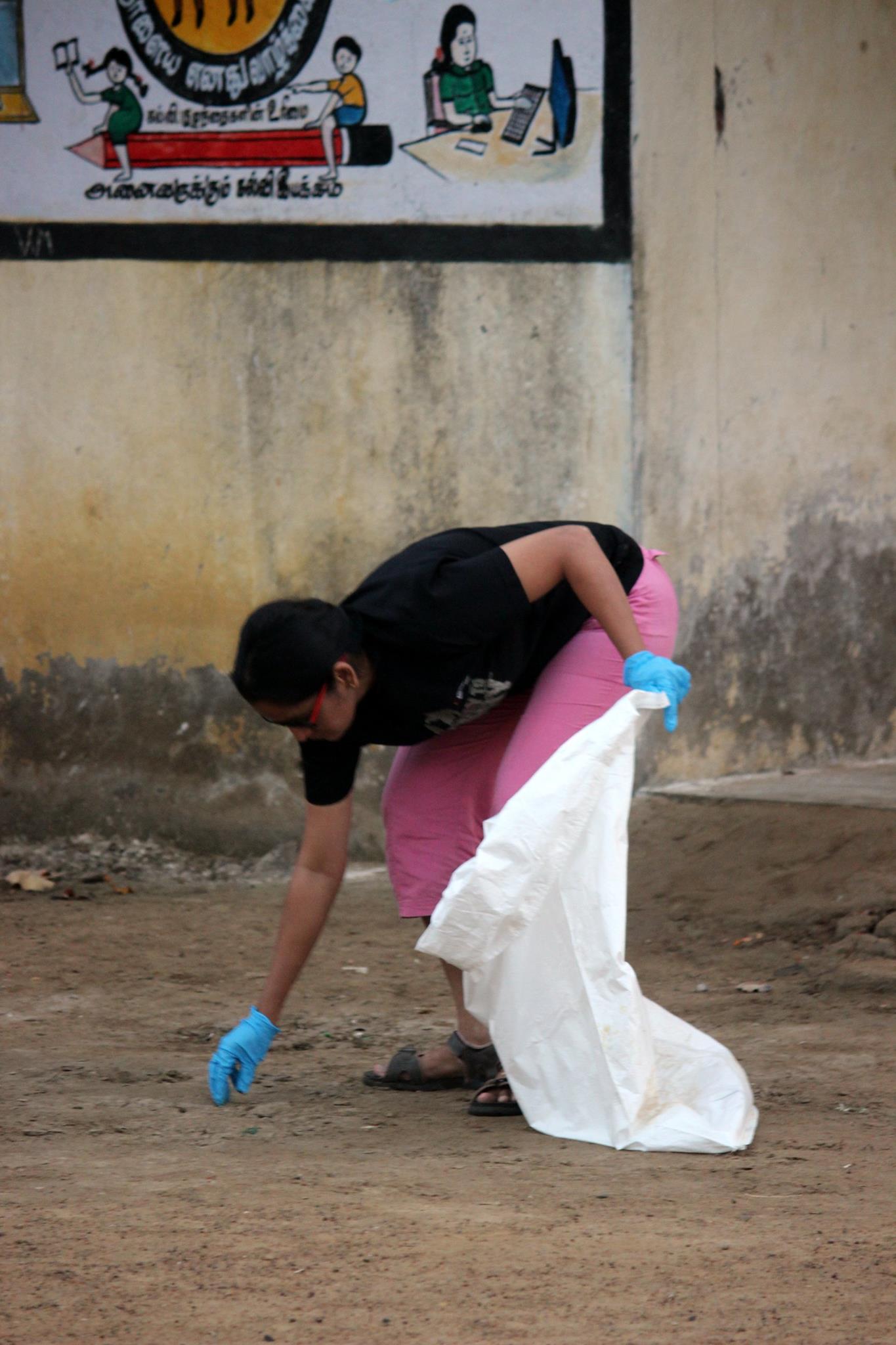 Sujatha says, “Within 3 months, we have close to 25L in aid of 40+ schools in 4 districts in Tamil Nadu. Not being a registered NGO and being a relatively unknown entity, this speaks volumes on the credibility that we have earned simply by focusing on what we set to do in the first place – help rebuild schools” 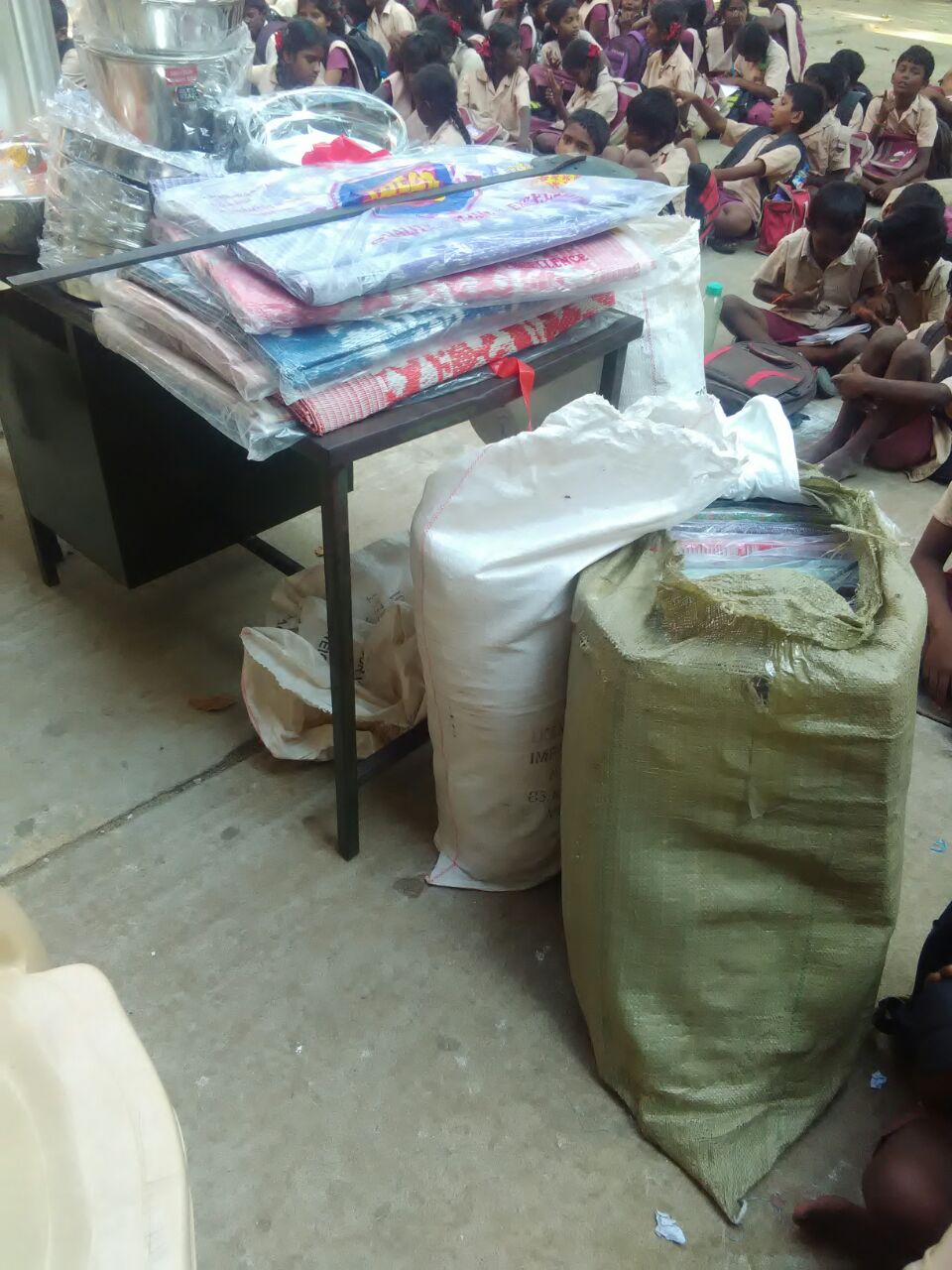 When people’s generosity surprised her!

Every minute of the last 6 months has been memorable and personally, very satisfying for Sujatha. “There was donation by individuals and 93 children of a social organization called I-care, raised funds in Dubai. Students of a private school from Hosur raised money and their unit painted a whole school for 3 days. A 101 year old, widow of an English teacher donated Rs. 1000 from her pension to help children too. We kept highlighting all these good Samaritan deeds on the TNFES page on FB and twitter as well.”

Sujatha says, “Currently, we are working to complete projects in 3 schools. While keeping in touch with schools we have worked on, we would like to expand to helping schools not just affected by the floods but any school that needs our assistance. We hope to be able to raise more funds and expand our area of operations to more schools and other districts of Tamil Nadu and perhaps, to other parts of the country. I am currently looking to return to a permanent career post my 4.5 year long maternity break. But, I intend keeping TNFES alive.”

Funds are the critical part in any social work, along with their availability, there are other legal and trust factors included on how it is spent for different issues.

When asked about how she handles this flawlessly, Sujatha says, “Right from the beginning, we have been particular about not wanting to handle any money directly, which is why we tied with RIM (Rejuvenate India Movement) initially, who helped us collect donations that we were offered but decided to re-route because legally we are not allowed to collect money. We then collaborated with Milaap to raise money online.

All decisions are taken in consultation with a panel of experts and it is never unilateral. All accounts and communication are visible to a group of volunteers to ensure equal access to information and no mishandling.”

Sujatha loves sketching, baking and has a flair for different languages. She has learnt to play the violin and veena and loves travelling a lot. Here is one of her sketches, depiction in her own words – “I dedicate this sketch of mine for all those who struggle between their dreams and reality, potential and paycheck, life and diseases. May you find a way that satisfies your soul.” 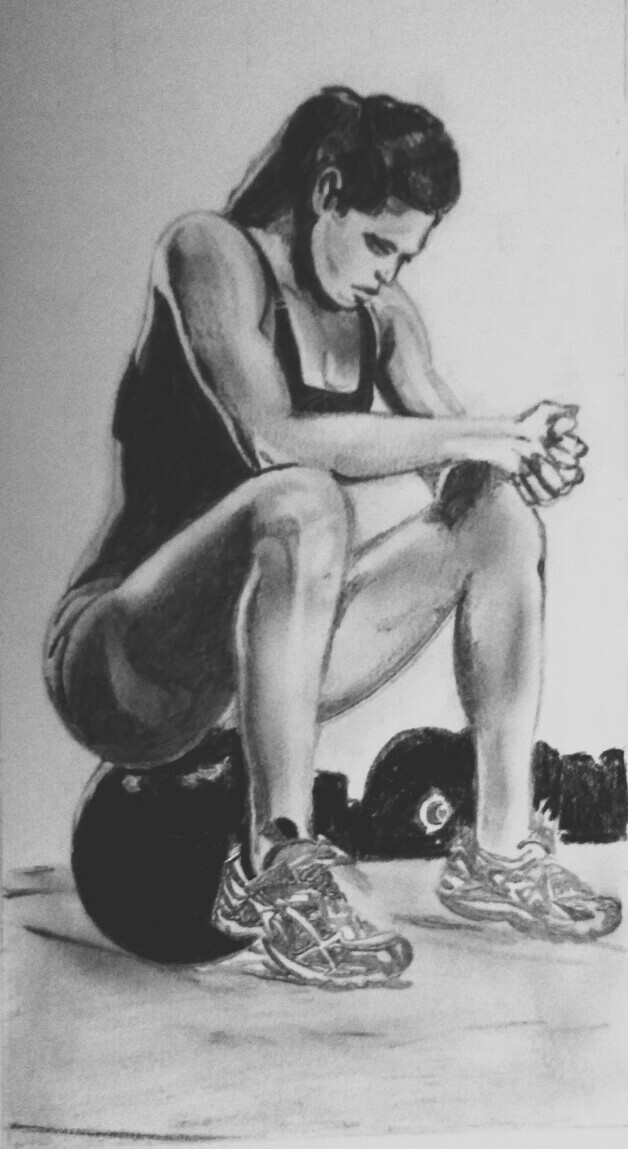 Sujatha fondly calls TNFES as her baby and one wonders how she manages to do so much social work inspite of her own almost 4 year old child! She adds, “When I was busy with TNFES work, my child would close the door behind me and tell aloud, ‘Amma is doing Chennai work, don’t disturb, let’s go play.’ That kind of understanding is what has kept me going all these months.” 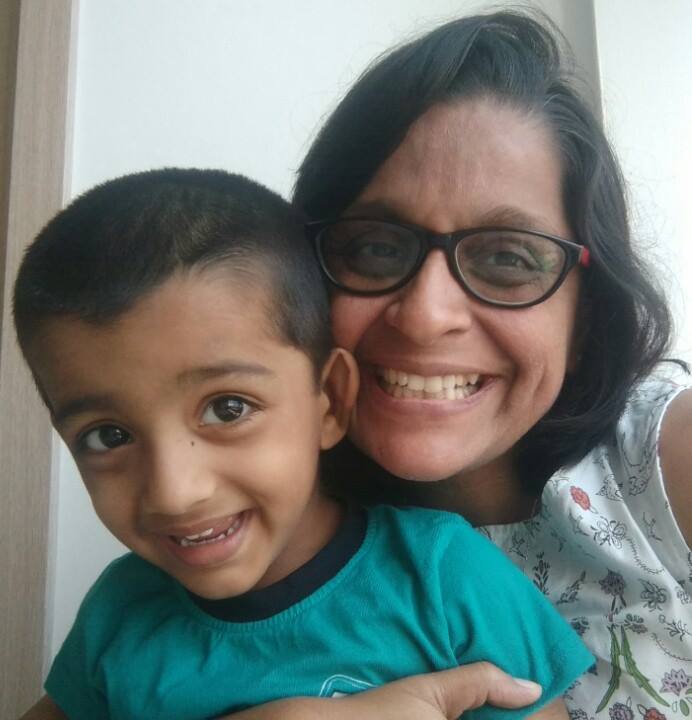 Talking about her learnings, she adds, “There is a sea of goodwill in the community around us. We just need to channelize that spirit to do meaningful, socially purposeful work in the most accountable and transparent way as possible. I seek perfection which is a journey and not a destination. So, I keep hoping to do more and more and 24 hours in a day is never enough.”

And here is the link to fund raising.

A Chat With Sujatha Srinivasan, The Brain Behind ARISE, An All-Indian, Low Cost ‘Standing Wheelchair’

This Is How You Can Help Chennai: #ChennaiRains