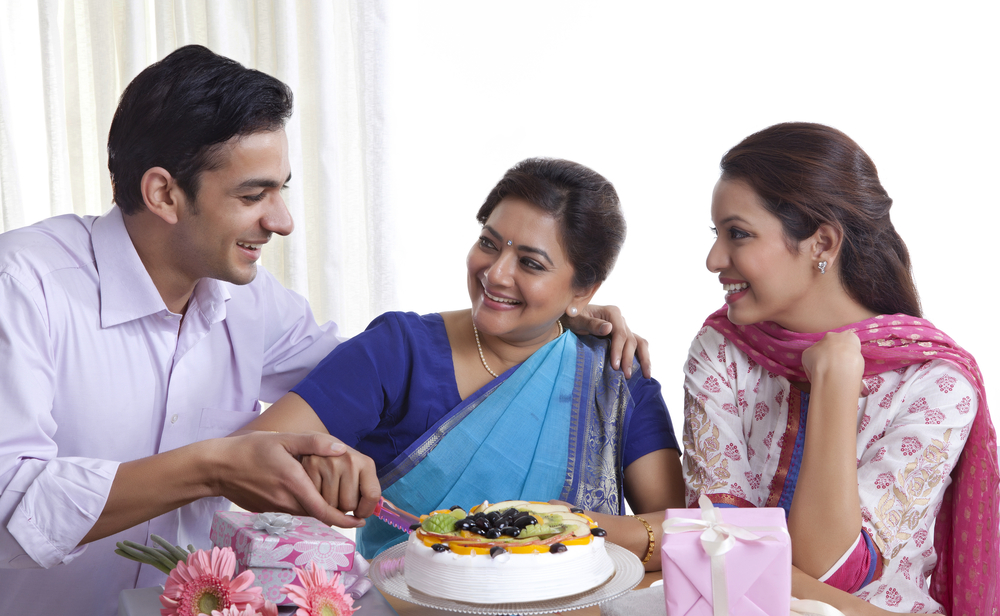 After sacrificing her own life to her male-chauvinist husband, a mother-in-law advises her daughter-in-law against making sacrifices because she is a woman.

She was on tenterhooks. To get no reply from him was just killing her. For the last 48 hours she had had no conversation with him through any medium. She was constantly checking his ‘last seen at’ status and lo, he had logged in just few minutes ago and her phone vibrated.

With trembling fingers she unlocked her phone and stared at the screen. Finally! It was his message.

She sat down in the chair to relax but when she opened the message and read it, she nearly stopped breathing. She didn’t know if he was joking or what. What was this? “Stay with your parents, no need to come…….bye.”

“My Agastya has written this….? No it can’t be he. I know he loves me, he can’t even think of saying this to me.”

Samayra was wondering all this when her phone rang. It was her mother-in-law,

“Hello, Samayra, how are you?” the tone in which she spoke didn’t seem like her mother-in-law’s in the least. She seemed not her mother-in-law but some self-effaced lady who didn’t need to be acknowledged by others which had been her first and foremost need so far, at least for last ten months. Within ten months of her marriage Samayara had noticed about her that she always needed buttering by others to remain happy. Samayara always found her offended even after trying to be her politest with her mother-in-law.

“Namaste, mummi ji,” said Samayra quickly adding, “How are you?” fearing lest she should get offended.

“Good.” Samayra could manage to say only this.

“Hasn’t Agastya talked to you? Oh how would he talk, he doesn’t have his phone for the last three days!”

“He doesn’t have his phone?”

“Yeah… your papa’s phone got smashed the very day you went home….and you know his business and moreover, he was going to a five days’ seminar with his friend so couldn’t do without a phone, and you know Agastya, he gave him his phone.”

“Didn’t he change the sim?”

“Of course, he must have…..but you know in how much hurry your papa always is, so he took the phone and must have changed the sim by now.”

“So Agastya isn’t having any phone with him…he can’t even message?”

“Yeah… ‘No need to come home…stay with your parents.’ But now I get everything. So I’ll talk to Agastya and say sorry,” said straightforward Samayara.

“You can do whatever you like, but I request you to listen to an incident before doing anything.”

“Ok, mom…” for the first time in her life her mother-in-law sounded sensible to Samayara.

“I was told the same thing 25 years ago by your father-in-law and how many times after this I don’t remember and every time I said sorry which has now become a cliché  in this house.”

“But why did that happen mom?” Samayara sounded interested.

“It was not that it was our first fight after marriage, but I went to my parents’ home for the first time after having a fight with Aakash. Agastya was just two. To have a fight was very usual, but I always preferred to keep mum. This was a habit with Aakash that whenever something went against his choice, he would go crazy, shout at me, blame me and would even assassinate my character and do whatever he could to express his anger treating me like his property. But that day he went too far that he slapped me. I had become habituated to the egoist nature of Aakash and had learned to subdue as we were taught in those times, but that day I thought of giving a piece of my mind to Aakash. I went to my parents’ home but could not tell them anything as ours was a love marriage, and Aakash sent me a letter saying, ‘No need to come home, you can stay with your parents…I’ll take care of Agastya.”

“‘Now what would happen, what would become of Agastya? I want to make him a gentleman but with Aakash he’ll learn only egoism and male chauvinism,’ the very thought disturbed me and besides, I was not even financially independent as like you the first condition with me was to leave my job for getting married which I did like you for the sake of love, otherwise I would have been at least a bank manager today.”

“Really, mom!” for the first time, Samayara was listening to her mother-in-law with interest.

“Yes…so I sent an apology letter to Aakash requesting him to take me back.”

“But what had happened mom, why did father slap you?”

“Oh…nothing I wasn’t home when he came from office one day. I had just gone to a neighbor’s house as Agastya was crying very much, so just to pacify him…”

“But what was wrong in going to a neighbor’s house mom?” Samayra interrupted.

“Nothing, just as there isn’t anything wrong in doing job, but it’s his nature; Aakash can’t stand all right things.”

“Then why do we all abide by him?”

“To make peace at home.”

“Yeah, mom exactly, I also want the same, I won’t talk about doing job again. I just want to see all happy. I know Agastya also wants this. I can sacrifice that much for my love”

“No, Samayra promise me you won’t use that word again as this word gives just pain and frustration, nothing else. The whole idea of sacrificing your happiness for the sake of others is just silly! How can you make others happy if you are not happy yourself? I’ve been doing this for last 29 years and you can see what I’ve made of myself. You yourself say that I’m not normal.”

“Ok, leave it listen to me, I’m not asking you to abandon your love or make Agastya unhappy. What I’m saying is you keep your love alive but not at any condition. Live your life on your on conditions so that you don’t have to repent like me. And you are lucky that you have found my son as your better half who I know is very caring and loving.”

“Yeah, mom, I know that very well. That’s why I’m ready to do anything for your son’s happiness.”

“Your sacrifice won’t make him happy, my dear, but your real happiness will. So do what makes you happy.”

“But, mom I don’t want their relation to get worse, moreover, Agastya is right, it was a condition when we got married that I’d never do job.”

“Love never has conditions my dear. This and so many other conditions were also put on me. And you can see what has become of me in keeping them. All I’ve got is frustration and regret that I could have been somebody if just I hadn’t made myself a means to satisfy that man’s ego. You don’t do this to yourself, don’t repeat history.”

“Yes, maa.” For the first time Samayra had uttered that word for Kusum with so much intensity.

“Thank you beta…” said Kusum with filled voice, adding, “So you won’t call Agastya, he’ll come to bring you without any conditions. He can’t take after his father. There can’t be fault in my bringing up.”

“Here you are wrong maa, he’s not like father but like you, don’t mind but he is like you – docile and submissive and always wants to make peace at any condition.”

“There is no end to such people’s conditions and I’m a living example of this but I won’t let you become the second one.”

Samayra had seen a totally different side of her mother-in-law that day. The lady who always sided her husband blindly, was showing things to Samayra; the lady whom she had always seen just as a frustrated woman was teaching her to be independent and happy in the real sense of the word. Her heart got filled with respect for her mother-in-law that day.

And she was right, Agastya did come in the evening. Samayara didn’t say anything, didn’t even complain, but Agastya explained, “I’m sorry, don’t be angry, I know I was wrong in shouting at you and siding papa when I knew he was wrong, but…you…”

“Hey relax, I know you, why are you explaining?”

“I know you are mad at me, I wanted to come the very day but papa called me urgently to Delhi and I didn’t even have my phone.”

“I know….so please relax but you were with papa….. mom didn’t know?”

“Yes…..otherwise I’d have come the same day. Yeah, mom didn’t know – it all happened so suddenly I couldn’t even talk to her, just told her I was going out of station. Actually papa was very angry that day and went to Delhi with his friend and in the evening his friend called me that he was having a heart attack so I had to rush to Delhi.”

“What…..father was having a heart attack?”

“No…uncle just got scared, but everything is ok…it was just a minor acidity problem. You know how hyper he gets in anger and starts eating the stuff he is not supposed to eat.”

“So you are not annoyed?”Agastya asked like a child.

“No!” said Samayara patting his cheek and getting astonished at Agastya’s innocence.

“So you are not leaving me. I promise I would let you do whatever you like, just give me some time,” said Agastya almost bagging.

“Hey…you don’t need to plead me, but who told you I am leaving you?”

“Then those divorce papers …oh…I understand you sent them in just a fit of rage!”

“Divorce papers? Yes, you are right I just sent them in a fit of rage,” said Samayara thinking it’s better to leave some things unsaid.

“So you are coming with me,” said Agastya getting on his knees as tears started rolling from his eyes. Samayara just hugged him tightly. She let out a sigh of relief, at the same time promising to herself that she won’t let anything happen to her relationship just because of an egoist.

That day after reaching home Samayara hugged her mother-in-law the same way saying, “I promise you maa I won’t let the history repeat itself, thanks a lot!”

For Kusum that hug and those words were the best gifts given by her daughter-in-law to her.

While literature is her first love, writing is a need for Rashmi to keep going.

“You Are Our Daughter-In-Law.; This Kind Of Behaviour Is Not Acceptable!”

Getting To Know My Mother In Law, Just Another Mother Like Me…