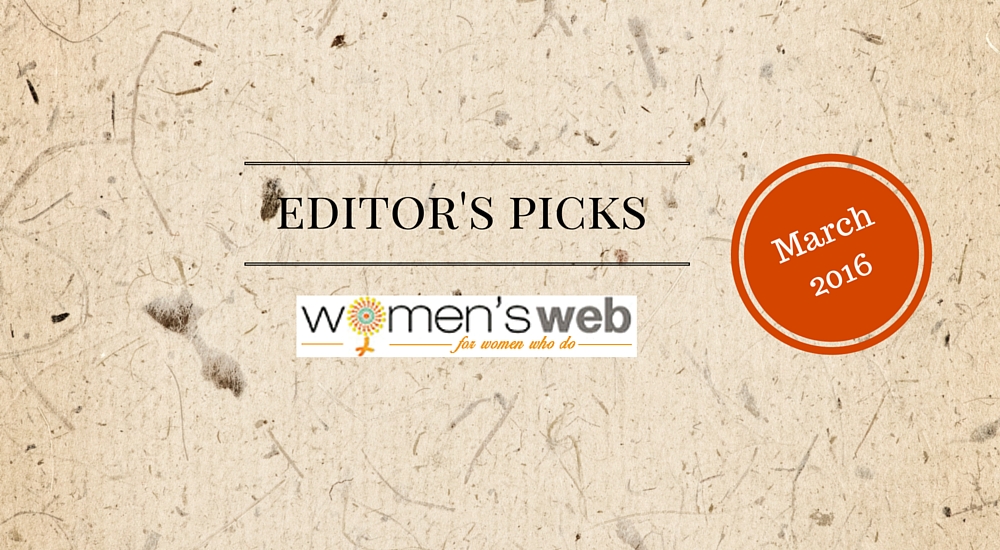 A collection of some of the best writing that appeared on Women’s Web in March 2016. Pick your favourites or suggest others!

This month on, here at Women’s Web, we’re going back to an old practice that had been abandoned for a little while simply due to lack of time!

I’m talking about ‘Editor’s Picks’ where as Chief Editor, I pick all my favourite stories from the many wonderful stories published here on Women’s Web. I don’t claim to use any objective rating criteria – I will simply be picking posts that resonated with me for some reason, and which I believe have been written beautifully.

Some of these have already become reader favourites while others may have been less noticed. Whichever it is, I believe you will find something to enjoy in all of them if only you go ahead and read them! So, without further ado, here is my list for March 2016 (not ranked in any particular order).

You Stare At Me And I Will Stare Right Back At You, by Lakshmi Padmanabhan

Staring at women is just one step away from touching a woman against her wish. This post looks at all that is wrong with ‘just looking’.

A lucid review of Big Hero, Size Zero, a much needed book by Anusha Harihariharan and Sowmya Rajendran for teens and adults to explore the concept of gender.

Introverted Or Conceited? The Social Challenge Facing Quiet Women In India, by Deboshree

Are quiet women conceited? Or just introverts less inclined towards ‘a good chat’? Is it then fair to label them thus?

What If Neerja Hadn’t Stood Up To Violence – Of Terrorism And Domestic?, by Tanvi Sinha

When The First Flush In A Marriage Is Over, How Is Reality Vs. The Myth?, by Baisakhi Mukerjee

Does the myth surrounding marriage really stand the test of time? What is the reality once the first flush in a marriage is over?

There had once been a home…, by Jhilmil Breckenridge<

This short story of loss and dreams, told from a mother’s perspective, sent chills down my spine. Nuff said! Go read it yourself.

What Can Be Done To Overcome The Confidence Barrier That Women Face At The Workplace?, by Kanika G

There is a decided confidence barrier at the workplace – a woman is less likely believe in herself and speak up about her ideas. What can be done to change this?

Motherhood Is Wonderful. But What About Who I Really Am?, by Seeta Bodke

A new mother muses on how motherhood is a wonderful thing, but why should it mean giving up all other parts of her identity?

Men Will Be Men, But Women Are Expected To Become Superwomen!, by Lakshmi Padmanabhan

Urmila Chanam, The Woman Who Is Changing The Way Women Think And Talk Of Menstruation, by Reshma Krishnamurthy

I hope you enjoyed these as much as I did. Happy Reading!