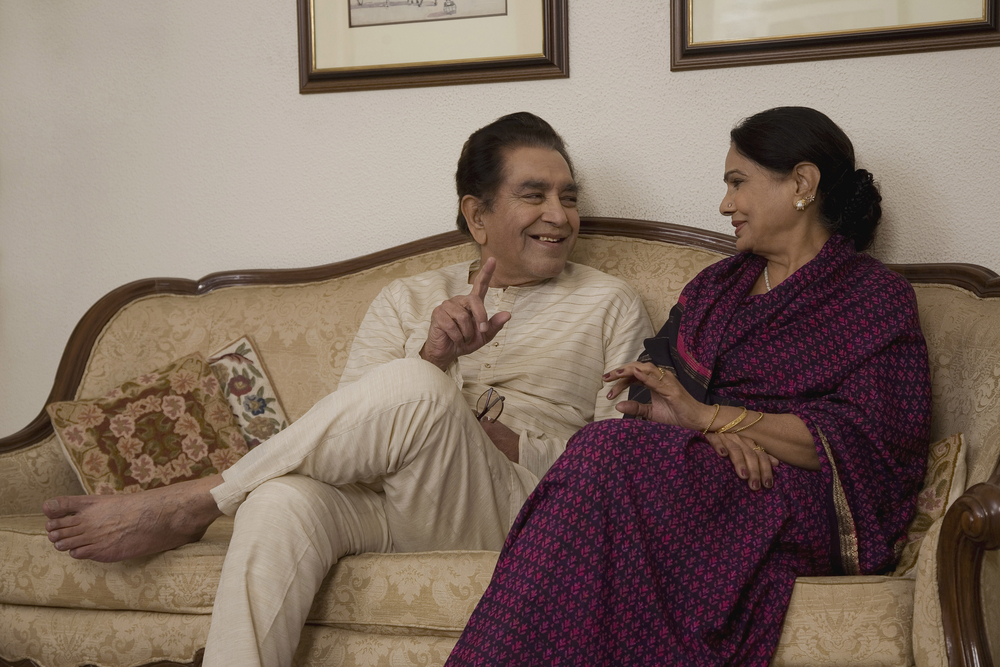 A Love That Transcends A Lifetime And Beyond [#ThisThingCalledLove]

True love doesn’t go away, the body may give up one day but love stays as it is – in memories, and in beautifully woven moments that we create.

“Only death can do us part!” say those in love. But in their case even death had to accept defeat, such was their love.

Ever heard of re-incarnation? Some may say this is only imagination and something we choose to believe in just to keep ourselves at peace, but could it be true?

This is the incredible love story of my grandparents (Mom’s parents) with whom I have always shared a great camaraderie and have heard all about those days when they fell in love, married, went through the struggles of raising a family while keeping their jobs, and then seen them enjoy their twilight years in the arms of each other.

Let us start right at the beginning. Long, long ago (I can maybe more than 60 years ago), Rohini, a young and pretty girl in her teens had just landed in Bombay, the city of dreams seeking her destiny just like so many others who set foot here looking for something better. She had just moved from Mangalore (a coastal town in Karnataka) seeking a brighter future, education and a job. She joined an evening college and secured a small job. In the midst of all this, they met one day.

Gangadhar was a young man who hailed from Mangalore too, and was in Bombay for a similar reason. They were happy to know that they shared a home town, a language (Tulu, a local dialect of South Canara), and soon hit it off. He was besotted by her. They would meet during evening college and he would walk her to the bus stop.

Gradually their fondness for each other grew and they started sharing their dreams, the troubles they faced, hopes for a better life and so much more. She told him of the trouble she faced with the relatives she lived with and he told her, “Marry me and we shall stay together at a rented house, I want to take you away from that life of despair.” They got married in a temple and later registered their marriage.

She was the ambitious one and though she belonged to an era where women’s role was limited to cooking and rearing kids, she was different. She dreamt of a career, recognition and a better job. She completed her MA while continuing her job in the day.

They soon had 2 children – a boy and a girl. She continued working, partly because of passion and also due to necessity; to lead a decent life in Bombay, they needed the double income. Some relatives of his were called upon to help babysit the kids.

He wasn’t as ambitious as her and he was more interested in drama and other such extra-curricular activities. But he always encouraged her to do her best, to study further, to look for better prospects. He was a hands-on dad. When his relatives moved out and the kids were still young, he took charge. Right from getting them ready for school, tying his daughters plaits, nursing them when they were sick, to cooking, he did it all. 4 decades back, this was a huge thing for a man, and I am proud of my grandfather.

Of course, they had their squabbles. Tempers flew and they vowed never to see each other again but in a few days it was back to normal. The kids grew up. Their son wanted to fly to greener pastures and he soon moved to USA. They got their daughter married to a suitable groom and they soon became grandparents to a cherubic girl and boy.

Life had improved by then and they were settled. Both held bank jobs. They moved to Goa when she got a good opportunity and lived there in the company of fresh fish and some good whisky! Their grandkids would visit them every year during summer holidays and life was a bliss. After retirement they decided to move to Mangalore, their home town.

And time went on

They celebrated their 50th wedding anniversary just the two of them together, as they had always been. Their grandkids who had now grown up and settled asked them to move closer, to shift to Bangalore rather than stay so far but they did not oblige. They were content in their little world.

He fell sick one day, and that marked the beginning of an end. They did not want to trouble their kids so kept this illness to themselves and somehow with great difficulty sailed through. But he knew his end was near and more than anything he was worried about her. How could he leave Rohini in the lurch? He had to make arrangements for her, to make sure that she doesn’t any face any kind of hassle when he was no longer with her. After all wasn’t that always his motto in so many years?

He called his daughter and told her they had decided to move to Bangalore and this had to be done as soon as possible. Arrangements were made, packers and movers came in, all the household items were moved, the car was sent and he handed all the car documents and other papers.

The next day Rohini and he were supposed to board a flight to Bangalore. They never boarded that flight. He breathed his last early that morning. What Rohini must have gone through when she woke up, kept calling his name asking him to wake up and get ready as they had to board a flight, going up to him and shaking his body only to find it gone cold!

She still had hope and called up the manager of the hotel where they were spending the night. An ambulance was called and the doctor confirmed that he was no more. She couldn’t just believe how he could leave her all of a sudden! Wasn’t he supposed to get better? They were supposed to go to Bangalore. What cruel joke was this?

She moved to Bangalore after his last rites but her days were haunted by his memories. Every morning she would think of the cup of coffee that they both had, how he would help in the kitchen -chopping vegetables, cleaning fish, making dosas, mopping the floor. As she set about doing each of these tasks by herself, she could visualise him. As she slept on her bed it felt like he was right there, beside her. Like he had always been for those 57 years. She missed the evening cup of tea, and their chats, she missed watching the political drama, cursing BJP and praising Congress, religiously watching news. She felt she could never get back to living her life.

And then one day, her granddaughter conveyed her the news that she was pregnant. This was exactly 2 weeks after he had passed away. They had been trying to conceive for many months but had not succeeded. And in that grandchild to be born, Rohini found her purpose to live.

Like a beacon of light, Angel (my daughter Amyra) entered our lives and time and again by her actions she reminds us of him. And she has given Rohini a fresh breath of life. She is the one in whose loving shadow little Angel grows up each day.

I am happy to see that Rohini has now ventured out and joined a library (books are the first love of everyone in my family). She also joined an elder care group which conducts activities for senior citizens. She keeps herself busy with the kid in the day and at night she reads or watches news and other such programmes of her interest. On weekends she spends her time at the elderly care centre amongst like-minded people. Sometimes I drag her as an accomplice in shopping (yes we have a mutual love for shopping) or explore some culinary delights.

I don’t think she can ever get over him but yes she had decided to live her life smiling and by being happy for herself and him for that’s what he would want. Their love story always leaves me with a warm feeling and rekindles my belief about love which is everlasting and omnipresent.

True love doesn’t go away, the body may give up one day but love stays as it is – in memories, in beautifully woven moments that we create, in everyday conversations, in the aroma of food, in places that we visited, in our kids. The little things that we once did together and seemed just like a regular part of life, but they linger on as bitter sweet memories and make our love come alive once more, time and again.

Some love stories are meant to last forever aren’t they?