The Women Who Are Fighters, Even In Their Battered Shoes

We all agree that domestic abuse and violence should not be tolerated. This post examines why the reality is so different; why women fight hard, yet don’t walk away.

Women: the fairer sex, the gentler beings, the tolerant ones, or, the weaker sex?

Gentle – yes. Nurturing a human life in the womb, bringing it into the world and raising her into a beautiful human being, needs a gentle heart. Tolerant, definitely. We put up with our society’s biased mentality towards the son, who is given the larger share of everything – from a piece of chapati, to a piece of the family inheritance. But, weak?

Absolutely not! And, please, stop using ‘fair’  as a prefix! It takes immense strength to live  life as a woman. Live life, and face it bravely.

However, there is one thing that shouldn’t be tolerated –  the abuse we face at the hands of our men. The mental and the physical abuse that some of us suffer from is mind-numbing. We know it’s  a crime, yet we put up with it, either for the sake of our children, or for the sake of our own survival. ‘Where would we go if we were to renounce our marital homes?’ is the question that plays havoc on our minds, even as our bodies continue to get battered and bruised.

As opposed to  popular myth, domestic violence  has an unbiased existence; it is found in no particular class. To put it crassly, not only does  the unemployed drunkard from the lowest strata of the society bash up his  woman; the highly educated, Mr. Richie Rich does  it, too! A fact too hard to digest.

An old  friend of mine – I’ll call her  ‘P’, shared some ghastly secrets of her marital life. Around the same time, my domestic help, ‘M’,  narrated the very same horror story about her’s!  The smiles on their faces belied the horrifying facts of their lives.

P has been living with this monster of a husband since nearly two decades now, and has been at the receiving end of some brutal physical and mental abuse for the last 8 years, or more. And, M, who earns her living, and raises her 4 kids, has also been in this living hell for the past 8-9 years. And, they have put up with it, bravely, just for the sake of their children.

We, ‘the lucky ones’, who live well-cushioned lives with our loving life partners, wonder why these women continue living a life of misery, when they can free themselves from their tormentors and live peacefully. We will never be able to unravel this mystery unless we have walked in their battered shoes  for a mile!

P, whose husband is  a very well-educated, highly successful man, feels that she won’t be able to fulfil her dream for her children, were she to live separately. Her husband can afford to send the children to foreign shores for their future education, but, she can’t. M, whose husband has been partially handicapped since many years now and been living off her, has nowhere to go were she to abandon her husband. With tears in her eyes, she told me about the grim reality of her lonely life: her father is dead, her mother herself is dependent on someone, and her brothers give a damn! A sheltered life, or a helping hand from her family is not in her naseeb.

My heart bleeds for these two women, who are living a similar life, in spite of coming from two very different worlds. P, who runs her home with a pittance for an allowance provided by her very well-to-do husband, can point out the bruises on her body with the exact reasons behind their appearance. M tries to hide her’s, when she narrates her story of how she makes two ends meet, even as her husband splurges her hard-earned money and tortures her no end.

Some amongst us will sympathise with these women, and some might criticise them for their unwise decisions. How much more can the human spirit endure? P, who did decide to end it all, has changed her mind and plans to keep silent, so as not to instigate the man to ‘punish’ her. M has decided to go meet the in-laws and see what they have to say about the matter, after which she plans to move out of the house and live on her own with her kids. Although, I doubt that will ever happen.

Expecting a reformation from such men is as good as expecting the impossible. Their giant sized egos find it  difficult to accept that their women earn more than them – as in M’s case. And, ‘controlling’ their  so-called ill-mannered wives being their birthright is what the other one believes; having seen his father treating his  mother in a similar manner! What is it that goes on in their minds, I wonder! The controlling, malicious nature, the viciousness – it sends shivers down my spine  just imagining living with such beasts day in and day out!

After learning about the intricate details of their lives, I think it would be unfair to call them ‘victims’. Such women should be addressed as ‘Fighters’! It takes great courage to live a battered life purely for the sake of the children. All I hope for these two brave hearts, is that they think  clearly and  logically, and come to conclusions that will help bring some amount of tranquility in their chaotic worlds.

But then, what about their dreams for their children?  If they do make decisions that will prove helpful to them, they stand to lose on other counts. It’s really a vicious circle, out of which they will have to find a way.

Women: Gentle and tolerant, yet, strong and courageous.

Woman and child image via Shutterstock 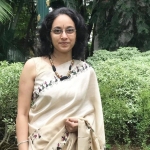 Domestic Violence — Why Do Women Suffer In Silence?

We Want The Maid’s Labour But Not Her ‘Infected Hands’, Says A New Ad