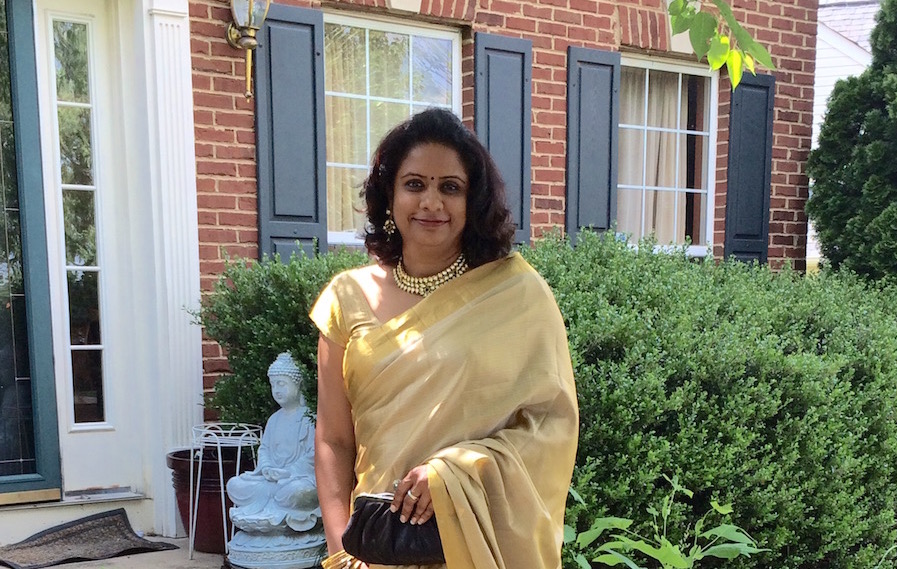 You Know The #100SareePact. Find Out What #SariForEducation Is All About!

Radhika Kowtha Rao, the blogger popularly known as Rads is asking you to wear a sari for a cause. Find out more about the #SariForEducation campaign.

Unless you’ve been living under a rock, you’ve probably heard about the #100SareePact already – an initiative started by friends Ally Matthan and Anju Maudgal Kadam to encourage women to take out those six yards more often and cherish the memories associated with them. For many of us, a sari is not just the beauty of the garment but also about cultural heritage and the joy of wearing something so closely tied to family as well as a larger history.

A popular blogger based in the Washington D.C area of the US, Radhika is trying to use the current of interest in the sari for a bigger cause: to help under-privileged girls in India. The #SariForEducation campaign that she has begun, has a simple request: Keep aside a small (or large) sum of money for this cause every time you wear a sari this year.

Here I share excerpts from an interview where she tells us more about her love for the sari and what she is trying to do with #SariForEducation.

Dancer, photographer, competitive cyclist, blogger, and now a fund raiser (besides being Mom!) – you have donned many hats! Tell us, how do you juggle so many roles and to which do you relate the most?

Radhika: As clichéd as it may sound, I relate to freedom of expression and being myself. All that I do revolves around the happiness that comes from doing what I do. I am a curious person by nature, and I am fortunate that I have the ability and time for me to pursue what catches my fancy, especially the creative ones. I sense a shift in the year 2015, in not just the awareness but the reach of awareness of what a woman/girl is capable of and I foresee liberation. This is just my small way of contributing to the movement. I don’t think I consciously juggle it, it just happens. I just get up and do! Ultimately, it’s about doing your best in whatever you do.

What was the inspiration for the #SariForEducation initiative?

Radhika: As I said, I believe in the power of the girl. My father raised me and my sister to be independent, free-spirited thinkers. My mom is a strong woman herself and I am fortunate to have two amazingly lovely daughters. I’ve always wanted to adopt a girl child, and well, it didn’t happen, so I do everything else that can help, as a natural progression. We all have our reasons on why we support the causes we do. Some support hunger, some disabilities, and so on, for me it is the girl child. Raise one strong girl; you’ve helped a whole family.

Tell us more about your journey to becoming a fundraiser.

Radhika: “When the student is ready, the teacher appears”. There have been a series of events, new people and teachings over the past year that have had a tremendous impact on me. For instance, I had approached the local mandir and offered to do a dance fundraiser in Spring 2015. I jumped into it headlong and it was a success. The next thing I knew, I was jumping headlong into another one, the #SariForEducation!

The thought behind it was: If I was wearing a sari and modeling anyway, why not make it work for someone out there? It was really a modest tweaking of what was sweeping social media anyway.

If I was wearing a sari and modeling anyway, why not make it work for someone out there? It was really a modest tweaking of what was sweeping social media anyway.

How did you choose which organizations to support from India?

Radhika: I spent considerable time scouring the net and asking friends before I decided.

I’ve known Akshara Foundation awhile, and I respect how they are a cohesive group of individuals who are doing such an amazing job and I value education, so that was easy. Akshara Foundation is based in Bangalore, and they have done some incredible work and their reach is far as they also have dedicated volunteers.

Aarti For Girls came via a trusted friend’s recommendation. They work with girl children and also enable adult women left destitute to become self-sufficient. I spoke with the lady, PV Sandhya, who runs the place and something about her and the organization resonated with the girl child in me.

In order to handle the funds as they came in, I thought it best to let a trusted organization take care of it, so funds are being routed via Asha Jyothi, a non-profit organization based in Northern VA, run by a group of five ladies. Strong women, with a clear head on their shoulders and they’ve been doing some good work including organizing 5K runs every September.

As a non-resident Indian, do you feel the sari as a cultural symbol assumes more significance? Share with us your personal, favourite moment from the campaign.

Radhika: Oh yes, absolutely! The sari attracts so much attention and is held in so much awe and respect when worn.  I have so many non-Indian girlfriends who all want to “dress Indian” (read sari, bangles, bindi, henna, the works!)

…the most overwhelming moment was when I landed at a lady’s place for a sari party. She planned it, organized it, and close to 30 ladies showed up in saris, and they listened, and were so incredibly supportive and wrote me checks when I least expected it to happen.

Regarding the favourites, there are a few because of how some women readily came forward, but by far the most overwhelming moment was when I landed at a lady’s place for a sari party. She planned it, organized it, and close to 30 ladies showed up in saris, and they listened, and were so incredibly supportive and wrote me checks when I least expected it to happen. I even blogged about it here. I knew just one woman in that entire group, and they all came together because they believed in what I was setting out to do, in education and in the girl child, and of course the whole appeal of the simple act of wearing a sari while doing it all.

The sari party that took on a life of its own

What are the other ways one can help this cause, apart from donations?

Radhika: You can help by spreading awareness in social media, talking about it with others, by hosting a Sari Party – invite a group of friends to come over in saris, talk about their experiences in how they make a difference, maybe ask for donations while they are, whatever they can give. The fundraiser is on for another 4 months, but I could honestly use a buzz in social media, just get more people to use #SariForEducation hashtag. I believe if I ask with a pure heart, the Universe will give me.

Any more heart-warming stories from this project? Do share!

Radhika: One thing that this initiative has showed me is that help and support comes from the most unexpected corners of the world and when you least expect it! One girl has been such a strong supporter and she came up out of the blue and even got a few friends to sign up.

Another was Author Shwetha Ganesh Kumar, who readily offered free copies of her e-book for three women who signed up. Another upcoming business gave away a jewelry set for one person who supported the project. My yoga teacher is hosting a sari party mid-July and there is so much excitement because none of them are Indian and the idea of dressing up in a sari as they help fund a cause is pretty novel and they love it!

Before we wrap up, what else would you like to tell our readers?

Radhika: We each of us have our beliefs and support a cause that’s closest to our heart. If you think education and the upliftment of a girl child is anywhere close to your causes, please consider supporting this initiative. If you are already doing the #100sareepact, please consider adding in the #SariForEducation hashtag to your pictures too. At the end of 2015, every hashtag and every sari you have worn will come together to help a girl in need.

If you hold the saree as an elegant symbol of the power and strength of the Indian woman, maybe you could spread the word, and get your friends to sign up, and donate whatever you can. Just share the website/post or this article. If you are a gentleman, please do not hesitate to sign up.

I have four male friends who have and that’s true support in every sense! Every little bit helps.

You can also visit the #SariForEducation campaign on Facebook.

On Savitribai Phule’s Birthday, It’s Time To Ask: Was Her Journey Easy?