Size Matters: The Drama In Shopping For Clothes With Your Child

When clothes shopping with your child, do you expect her to buy a larger size to accommodate a future growth spurt? A lesson in living in the present. 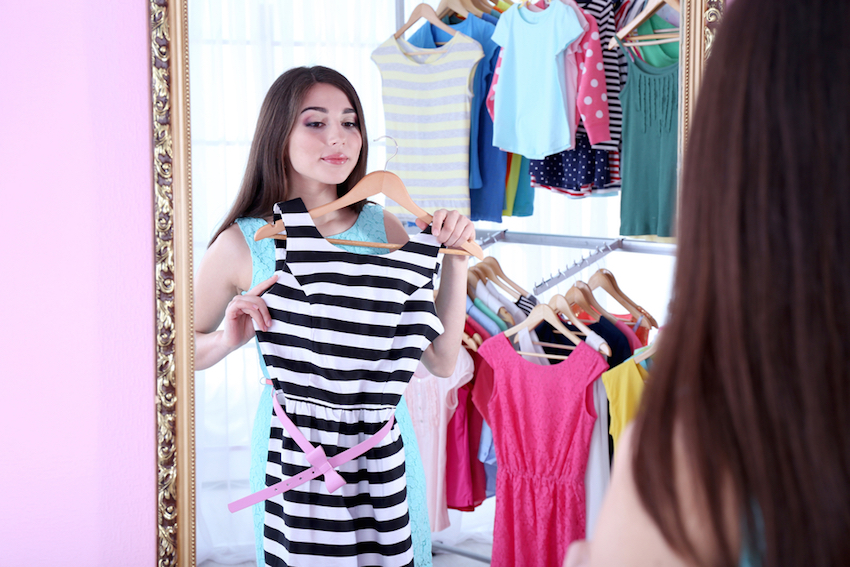 When clothes shopping with your child, do you expect her to buy a larger size to accommodate a future growth spurt? A lesson in living in the present.

A fitting room negotiation was going on between my daughter and me. Each of us was trying to dominate the negotiation with her own logic about clothes, fitting, colour and style. The scene was one of a hungry mother and a scrutiny conscious daughter reasoning it out within the confined walls of a small fitting room. I rolled up my opinions and analysis in my tongue because anytime I bought a dress that catered to my preferences over hers, I have to hear whining and witness some criticism every time she wears it.

Right then I heard the persuasive crying and pleading of a girl from the adjacent fitting room; probably a tween trying to fit into a tight dress. The mother was coaxing her daughter to take a dress bigger than her normal size, was what my inquisitive, eavesdropping ears conveyed to me. As we stepped out of the fitting room we saw the mother daughter duo. Sad sight…the girl was trying on a dress that looked large enough to fit her mother (just in case her mother decided to shrink two sizes down). She was sobbing profusely and begging her mother to take the right size.

The mother was reasoning out loud as if she needed to convince the (single) saleslady and get her approval on the hidden agenda that “kids outgrow clothes very fast”. It was almost like pearls of wisdom being passed on from an experienced mother to a future mother.

The mother’s counterpoint to her daughter’s argument was that the girl was growing at the rate of inflation and therefore they need to buy clothes that could be worn for atleast a year so that it was worth the price.

I didn’t want my curiosity to reflect on my face lest my daughter follow suit…. God save me, as I know this apple has never fallen far from the tree! We moved towards the cash counter and then realized that the little apple had forgotten her handbag in the fitting room, so we dashed back there.

My heart was really aching to tell that mother that her daughter would look better and feel better if she bought her the right size. But then manners took a handle on the situation and asked the sensitive me to apply the brakes  on my tongue. After all I was an outsider to their negotiation and not even invited for an opinion.

As we took the handbag from the fitting room and dashed back to the cash counter I heard my daughter say aloud “Mama, that dress is really big for that didi”. True indeed that my apple never falls far from the tree! I hoped the my little one’s suggestion would rescue the other girl from an oversized dress.

Later in the day, we were at a grocery store and there we actually saw a toddler in an oversized outfit. The truth is that the toddler can’t even reason with his parents over an ill-fitting dress. Or maybe the toddler is so used to wearing larger sized clothes that he is clueless about fitting clothes.

It’s a very common discussion or rather decision during shopping for clothes that they should be worn for a longer time. I am not referring to the durability of the fabric but the ‘growablity’ of the kids. I am sure most parents can relate to this shopping condition….been there done that…

Sometimes, parents get so carried away by how long a garment is and how long it can be worn, that they forget the present fit. I too agree that  it is worth the money if the clothes could be worn for a longer period of time. There are times parents compromise on the current to save for the future, but, in every aspect of life, the present matters the most.

The future is unseen, so let’s make kids happy for today, especially on special occasions like birthdays and festivities. The habit of saving is fantastic but it should not be at the cost of our kids’ current happiness. When teenagers object to ill-fitting clothes, they are called the victims of the current generation. Think about it, would parents buy clothes a size bigger as a saving, just incase they grew horizontally (other than expecting mothers)? Would parents wear ill-fitting clothes in public or on festivals?

Finally when we reached home with the clothes and my daughter did her ramp walk for my parents, my mother habitually exclaimed, “Why did you buy this size for her, she will outgrow it in a month? Should have taken a size bigger”

And the story of size continues…

Let us see a smile on our children’s face today. Tomorrow, when today becomes yesterday, we might regret those tears.