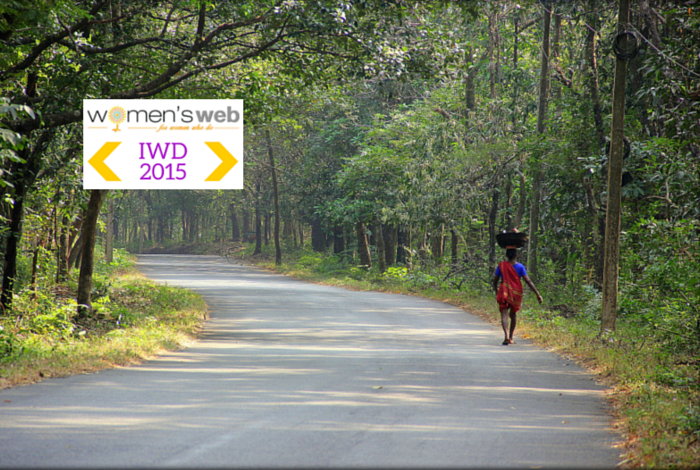 The lives of women outside the home are rich and interesting too. This collection of photos is from our Beyond The Doors photo contest.

Earlier this year, we ran our very first photography contest for readers, Beyond The Doors. The objective was simple: To show women going about their lives beyond the four walls of the home, working, walking, travelling or just ‘being’ outdoors.

Too often, the ‘home’ is considered the only safe space, and everything else is seen as ‘dangerous’ territory; hence the often well-meaning advice to women to not go to unsafe areas, not wear certain clothes, not step out beyond a certain time.

Part of reclaiming the streets is to acknowledge that women are already present in the world beyond the home. Neither is home a place of unalloyed safety for every woman nor, in the converse, does every woman have a ‘choice’ to stay indoors or not step out after 6 PM.

The world may be tough, but there is also much beauty in it. These 20 photographs show the lives of women in the world outside the home, and each brings something unique to the whole picture.

I also loved the fact that we received entries from participants all around the country, and sharing photos of women from places as diverse as Nagaland and Kerala, Kashmir and Orissa. Plus, photos of girls, young women, old women, affluent women, poor women, woman as workers, travellers, loiterers, readers, commuters, mothers….enjoy this beautiful collection!

Photographer: Triveni Keskar. This photo won the first prize in the contest.

About: Triveni took this photo while cycling through South Goa, near Netravali. She was inspired by the strength of this old lady carrying a heavy tokri and walking as fast as a young girl. Contest judge Rita Banerji, Founder of the 50 Million Missing campaign says, “Really puts this woman in context of the environment she lives in. Sums up her life.”

Photographer: Deepak Kumbhar. This photo won a second prize in the contest.

About: Deepak shot this photograph near Kolhapur, Maharashtra. These two girls from a ‘hill family’ in the region are working hard, carrying loads similiar to what adults would. It is not an easy life. Contest judge K Madhavan Pillai, Editor of the Better Photography magazine says, “Frame within a frame composition. I would prefer not to have the tilt and the timing could be better. But this picture tells the story of the reality of the girl child in rural India, that we so desperately need to change.”

Photographer: Smitha Samdariya. This photo won a second prize in the contest.

About: Smitha took this photo at the floating Meena market, on the Dal lake in Srinagar. She feels that the sight of this lady rowing her shikhara at night, running an errand or perhaps even heading out on an emergency, among largely male boatmen conveyed to her something of the resilience of Kashmiri women. Rita Banerji says, “A woman paddling among many men. Makes a statement.”

Photographer: Suman Sengupta. This photo won a participation prize in the contest.

About: We don’t actually know which beach Suman took this photo at, but as judge K Madhavan Pillai says, “A simple image, but eloquent, quiet and peaceful”. He also felt that the subject and the position of the umbrella is excellent, though there is a tilt in the horizon that could have been easily avoided.

Photographer: Eklavya Prasad. This photo won a participation prize in the contest.

About: Eklavya says he captured this ‘moment’ on a scorching May afternoon on the eastern Kosi embankment, at Simri Bakhtiārpur, Saharsa, Bihar.  The woman’s confident walk despite her heavy load (which also signified the many responsibilities on her shoulders, struck him). He says, “Nothing, absolutely nothing seemed to deter the brave heart from performing her duties, irrespective of the existing challenging environment. In addition, even the gruelling daily chores, did not impede the bonding and fondness between the mother and the daughter. Such was the connect.” K Madhavan Pillai says, “…a rural woman at work… a seemingly quintessential subject, but one that is also a truth in India.”

Photographer: Rohit Bhasin. This photo won a participation prize in the contest.

About: Rohit took this photograph of his wife at Ganpatipule Beach in Maharashtra. An avid traveller, his wife let her hair down at the beach, and Rohit captured the moment. He says this shot is special to him because of how the wet sand reflects her happiness and her actions as a free spirit. Rita Banerji calls this “a great capture!”

7. She knows her way

Photographer: Parul Kashyap Thakur. This photo won a participation prize in the contest.

About: Parul took this photo in Pune, where has often observed women who work as domestic helpers save time by cycling to work. She says, “This woman knows how to find her way in the literal and figurative senses.” Rita Banerji comments, “This photo says independence, freedom, movement. Great subject and composition.”

8. A moment of indulgence

Photographer: Prachi Soman. This photo won a participation prize in the contest.

About: Prachi took this photo on her way to Bithoor, near Kanpur  in Uttar Pradesh, on a hot May day. She wanted to capture the moment when a person selling ice lollies appeared, and these women vending vegetables, took a few minutes off work to enjoy themselves. She says, “I like the way she let herself forget the world for a while.” Rita Banerji says, “I love the nonchalance with with which they are sucking on those ice-sticks. The orange pulls your eyes to the one thing that’s giving these hard working women in the sun some cool respite and enjoyment.”

About: Niyantha took this photo of Tserin, her cheerful, untiring trekking guide, while out on a trek in Ladakh’s Sham Valley. Tserin started trekking when she was in the eleventh standard and now works for the Ladakhi Women’s Travel Company (LWTC) as a porter. The LWTC, a completely women-run outfit, employs ten guides and ten porters. She is also acquiring a college degree in the off-season. Niyantha says, “It captures her in a moment of joy, a moment all the trekkers she guided that day will probably remember her by.”

About: Shankar loved the way his wife was playing in the water, “like an innocent kid.” He saw her smile and wanted to capture the moment forever. This photo was taken somewhere in Coorg, Karnataka.

About: Sourangshu took this photo in a remote village of Purulia district in West Bengal, at a conference of women’s self-help groups, where women were “rallying, singing, acting, playing football and all.” He feels that such happy and liberated moments, which are rarely seen within the confines of home for many women, need to be captured.

About: Cheryl took this photo in Connaught Place, New Delhi. She says, “What led me to take this shot was the fact that the woman sold hand-stitched clothes in front of a branded store, under a sign that read ‘Man’- against all odds – with a smile on her face.”

13. Doing what she loves

About: Madonna took this photo of her twin sister, an avid reader, at a beautiful garden in Khandala. She says, “I like this photograph for its vibrant colours and how it brings forth the essence of a woman doing what she loves in this beautiful and tranquil setting.”

About: Pragati shot this picture of her daughter standing amid mustard fields, at village Gareriapur near Bhadohi, in Uttar Pradesh. She took her daughter to visit her father-in-law’s maternal village, and she wanted to capture the child’s excitement and happiness at her first ever sight of a village, and its green surroundings.

About: Akanksha took this photo of a woman sitting all by herself, mesmerized by the beauty of the Taj Mahal. She could not help wondering what was going on in this woman’s mind, if she was appreciating the architecture, or perhaps thinking about the man in her life!

About: Divya took this picture in Mylapore, Chennai capture a happy moment shared by a mother-daughter duo selling flowers.

About: Best described in Chandana’s own words. “I was having breakfast in a cozy cafe in Pondicherry when I saw this woman step out of her house. I was instantly arracted to her smart polka dotted saree when I saw her pick up an umbrella and walk onto the road. Quite unexpectedly she walked to a little cycle shed, threw her pallu over one arm, held an umbrella in the other and started peddaling away! It was such a unexpected and lovely moment that I hurriedly took out my camera for a click. By the time I was ready she had already cycled past me, but she unknowingly managed to give me this picture perfect shot! I still wonder, every time I look at the photo, where she must have been going. Is she a student? Does she work somewhere? Does she have kids? How does she feel to be independent and free? What are her dreams? What is her story?”

About: Asraf shot this photo of his wife on the way to Bhutia market, in Nainital, Uttarakhand. He wanted to capture the expression of his shopping-happy wife. He says that if possible, she would have picked up all the bangles for herself!

About: Jhelum shot this photo in Hyderabad, capturing a woman who refuses to let physical limitations stop her. She says, “While the bright clothes she is stitching shows her capacity for art, the customised scooter, parked a few yards away serves her practical need for mobility. She is not like an artist who wants to be away from the world; she travels to participate in the life around her and yet find a little space of her own… She is an inspiration for all of us who are otherwise healthy  waste our time worrying about wrinkles, acnes, white hair and other such little things.”

About: Ananya Kumar shot this picture at the Jaisalmer fort in Rajasthan. She was attracted by the friendliness and warmth with which the sellers called out to her, “Didi, le lo!”

Liked this collection? Please do go and have a look at all 92 pictures submitted at the photo gallery on Facebook.

Beyond The Doors: A Women’s Web Photo Contest