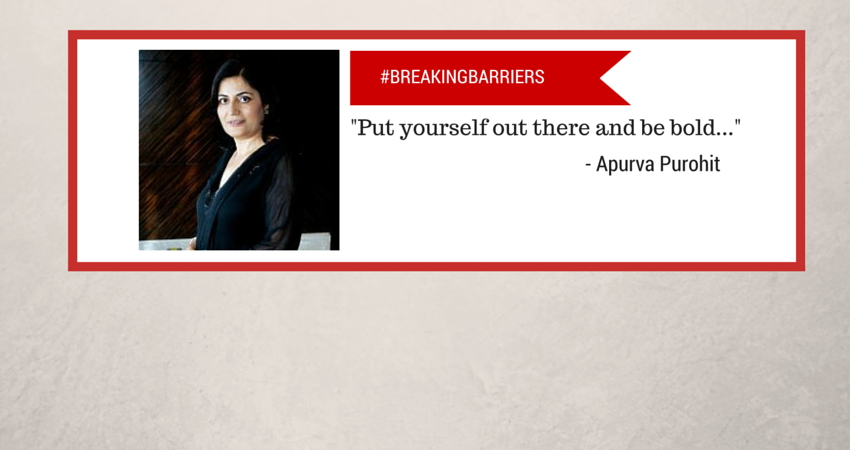 Apurva Purohit, CEO of Radiocity and Author of Lady, You’re Not A Man is passionate on the topic of enabling more women to work and achieve at work.

One of the few female CEOs in the media industry, Apurva Purohit, the CEO of Radiocity is a woman whose talents run to many directions. Besides her work as CEO of a large and vibrant organization, she serves as a board member on the boards of reputed companies such as MindTree and Meru Travel Solutions Ltd.

What’s more, she is the Author of the best-selling Lady, You’re Not A Man, a highly readable book of practical advice for working women in India, based on her own long and successful career. (Prior to her entry into radio she has been part of the television space where she worked with BCCL & Zee Telefilms. She has launched successful TV brands like Zoom, India’s first lifestyle channel and Lodestar, which is counted amongst the top 5 media agencies in the country today.)

Apurva is a speaker at our upcoming Breaking Barriers to Business Growth event for women who are entrepreneurs or self-employed as freelancers, and looking to grow into running a larger business. (Get your event pass now, to be part of a high energy event, and learn with and from successful women!)

Prior to the event, we caught up with her on the topic of retaining and supporting women at work, a subject that she is passionate about.

What first got you interested in the subject of women at work? How did the idea of writing, Lady, You’re Not A Man come to you?

Apurva Purohit: I basically wrote Lady, You’re Not A Man (LYNAM) when I realized that many women in the working world today do want to make a success of both family and career, but are struggling to cope. There are very few role models they can learn lessons from, and they believe that they are alone in their struggle, when actually every woman is going through much the same thing.

LYNAM was written to inspire and motivate women to recognize that they too could become immensely successful if they followed certain practical tips and guidelines. The truth is that all women have the same opportunities, the same skills and the same challenges. Successful women just dealt with the challenges differently. That is what I wanted to communicate through LYNAM.

In your many years of experience in industry, are there some traits you have seen common to women at work? What helps them survive and thrive?

Apurva Purohit: I think women are more consensus building, willing to listen and change and also willing to teach. As increasingly the new set of leaders learns to deal with Gen Y-sters who do not want to be ordered around, but who want to work where their opinions are sought, and where they can see value being added to them, women will do better and better as leaders.

However I also find that good leaders – male or female, are those who have evolved a style which has in equal parts certain masculine traits like being more assertive, decisive and with the courage to take calls and certain very feminine attributes like willingness to listen, patience to evolve a consensus.

I think women have multiple roles that they are playing at any time and have far wider interests and tasks then men. I think this will help them thrive, so when one part of their lives is not going well they have others to fall back on. Women need to recognize this as a great advantage that they have and not run away from any of the roles.

Please share with us some of the ‘highs’ you have experienced in your career –  what would you count as some of your most significant achievements?

We are delighted that our community will be hearing from you at the upcoming #BreakingBarriers event for women entrepreneurs. In what ways do you feel such networks can help women?

Apurva Purohit: The single biggest reason why women falter at achieving the kind of success they are capable of is because of their own lack of confidence; when they see women like them at the top it gives them a huge boost. Unfortunately we still don’t have enough women at the leadership level, so at this stage, we need to ensure that women meet and interact with other women like themselves and learn from them. Such networks therefore certainly help.

I also think all our lives we have been asked to be the ‘silent invisible gender’. “Girls should not talk loudly, laugh boisterously, draw attention to ourselves etc” while our brothers could really be as open and visible and loud as possible. Maybe it was in parts a desire in our parents to keep us safe by being less noticeable. Thus, centuries of stereotyping has made us more tentative about ourselves and even if we know better, we often choose to remain silent.

The best way to handle this is to force yourself to put yourself out there and be bold – whether in taking action on a particular issue, responding to a query or just being heard in a forum. Again networks help in making the voices of women be heard.

From our work in this space, we know that there are times when women consider giving up; when it seems like it is just too hard to manage work and family in a meaningful way. Do you have any advice for women – what should they remember at such dispiriting moments?

Apurva Purohit: From my experience of observing working women, I have noticed that women give up their careers with relative ease because they believe they have a choice to stay at home and no one will look askance at this decision. Women have to tell themselves that being financially independent is not a choice – it is an imperative.

Women have to tell themselves that being financially independent is not a choice – it is an imperative.

Increasingly, women have to understand that they will feel fulfilled if they manage multiple roles, of being nurturers as well as hunters! Secondly, they have to be willing to make their career their number one priority for a large part of their lives and not treat it as secondary throughout their work life. At some points it will take a back seat (especially in the initial years of child rearing) but for the rest of the time it has to take precedence over mostly everything else.

One of the biggest reasons women give up is because they feel guilty of not being around for their children 24/7 .There will always be some residual guilt but you need to deal with it. Even I wish I had spent more time with my son, but today, when he feels so proud of me and is motivated by what I have achieved, I feel it was worth it.

We’d love to know a little more about you as an individual – beyond work, who is Apurva?

Apurva Purohit: “To define is to limit,” so I find this a very difficult question to answer. I don’t like labels and I don’t like to think of myself as belonging to a particular industry or being a particular type of person or leader. I think if we are willing to learn and work hard we can all be good at everything!

I am what is popularly known as an ‘army kid’. My father was in the oil business which meant that every three years we were shunted from one city to another. When we were growing up, we largely studied in convents since there were very few coed institutes around; obviously this upbringing by strict nuns has had a very profound effect on me. The positive impact of being in an all-girls school/college was that we didn’t have to suffer from comparisons and have stereotypes of the ‘boys are better in math’ type thrust on us. Thus we grew up largely thinking we could achieve anything we wanted to in the bigger world out there.

I have a 21 year old son, who studies in Boston. My husband Sanjay, whom I married straight out of IIM-B was a year senior to me there, and currently is the Managing Director at Levi Strauss India. We have been married for 25 years and he and my son, along with my mom, are my biggest cheerleaders. My mom indeed played a large role in bringing up my son and I was able to work throughout the last 25 years primarily because of her support. She herself is a Ph.D in psychology and has been a teacher most of her life. I love spending time with my family, traveling, reading and listening to old Bollywood music.

[VIDEO] Apurva Purohit: You Don’t Have To Be A Suffering Sita!