The wheel stops for no one - at least, no one who is still living. You just have to scramble along as best as you can. 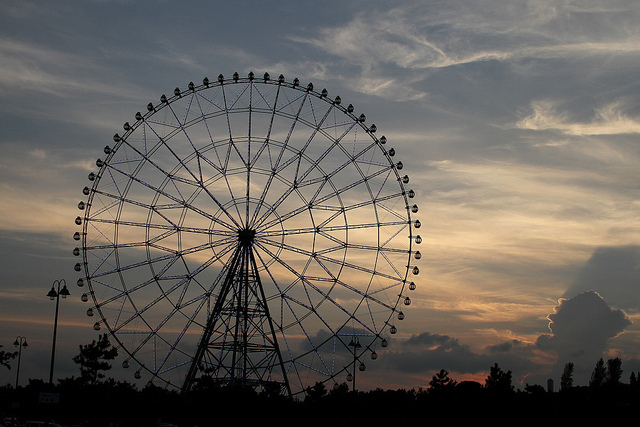 The wheel stops for no one – at least, no one who is still living. You just have to scramble along as best as you can.

It was summertime. They had a deadline, or so it seemed. Before the rains came slashing down in six weeks, they had to complete the construction work and hand over the possession of the building. More and more workers were brought in to complete the carpentry, plumbing, and painting. Huge construction-lifts constantly paraded men and material up to the 35th floor and down.

Nathuram was sitting on the top floor, completing the onyx flooring in the living room. The delicate pink of the stone reflected in the sun and lent a sombre glow to the room. Just like those evenings back in his village when the setting sun turned soft yellow to deep red to tranquil orange. And when he closed his eyes, he could still hear the water of the river lapping up on the banks of his farm, the giggling of his little girls and the simple games his young sons played, after a day of school and working in the fields. Every evening, he would pack up his tools, take his pair of oxen and head back home. It was the same now, he would still pack his tools, but there was no home. Home was far far away.

The buzz of the floor polisher brought him back to his onyx. He hadn’t seen his wife and kids in two years now. He felt that if he did not keep remembering them, their faces might fade away. Every fortnight, he would deposit his wages in the bank account and his wife would withdraw it from the branch in his village and call him from the market telephone booth. She would always get one of the four kids along, and he could talk to them. Assure them that he would definitely come home this Diwali. Soon.

Their work continued till midnight every day. There were still seven hours before Nathuram could lie down and rest his throbbing back. Just then, he heard a huge commotion and all six of his team rushed to the edge to look what’s happening. Someone had fallen down from the building and a tiny speck of what was once a full grown man could be seen sprawled on the ground, arms flailing as if he was trying to swim. They rushed down to see and found that it was Venkaiah, another local laborer who worked on that site with his wife. How he fell down was unknown. Venkaiah’s wife was hysterically crying besides her now dead husband. The other women tried to console her, somebody put her infant son in her lap, but she wouldn’t calm down. This went on for 20 minutes before police dispersed everybody, while talking to the management.

They were immediately asked to get back up and resume their work. Nathuram went up to his top floor and stared out, there were still no windows, but huge french window shaped holes in the wall. And now there was a Venkaiah shaped hole in the world.

Faraway, he could see a Ferris wheel, unperturbed, going up and down and up again. Like his day, like his life. Each turn was exactly like the one before. Each day was exactly, monotonously like the previous one that he slept over. Unperturbed, unflinching, constant. It again reminded him of the water wheel on the well in his village. The wheel turns and turns and turns: it never stops and stands still. And that is how they got water. And the crops grew and they survived. Back here, that was how he could earn his daily wage. Like the rhythmic sun, which would come up every morning, and would set in time before their energy was fully exhausted. Unperturbed, unflinching, constant.

Nathuram sighed and concentrated on the buzzing wheel of the floor polisher.