A God In Every Stone [Book Review]

Kamila Shamsie's new novel, A God In Every Stone, set in the Partition era has at its heart a quest for identity through archaeology. 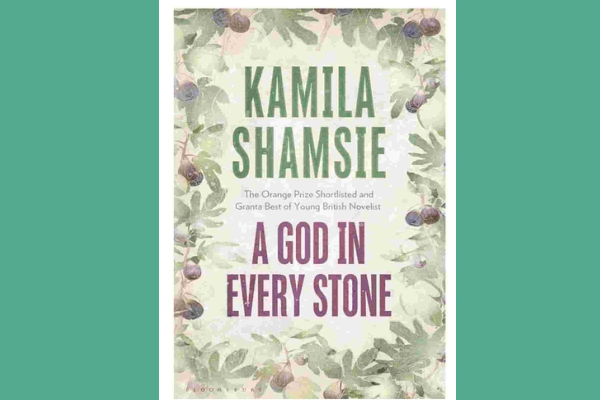 Kamila Shamsie’s new novel, A God In Every Stone, set in the Partition era has at its heart a quest for identity through archaeology.

One hundred years after the greatest carnage in history, the extent of India’s losses in World War I have come to light. Kamila Shamsie’s latest novel, A God In Every Stone begins in 1914 with an archaeological dig in Turkey with the romantic Vivian Spencer, overwhelmed by history and Scylax, the man who travelled from Persia to Peshawar and was rewarded with a silver circlet by his Emperor Darius.

War separates Vivian from archaeology and from Tahsin Bey, who she loves despite the difference in their ages, and sends her nursing the wounded from battlefields like Ypres, shattered men and lives. Her life runs parallel to that of Qayyum Khan from Peshawar, who has lost his eye at Ypres and is freed from the battlefields to return home, filled with hatred for the British who will never regard people from the subcontinent as their equals.

Though it is a book about the East meets West complexities, E.M Forster taken to a different level, since the author is from the subcontinent – at the heart of the novel is a quest for identity through archaeology, a different, more erudite kind of cultural intermingling. Vivian travels to Peshawar in Syclax’s footsteps looking for the silver circlet which he lost somewhere on his voyage, hoping to retrace the happiness she lost in Turkey when the War began and plagued by guilt because she was inadvertently responsible for Tahsin Bey’s death.

With history filling her vision, she sees Qayyum on the train as a Greek hero of antiquity. Fate puts Qayyum’s young brother in her path and she transforms him into a classical scholar.

Shamsie’s portrayal of Vivian is in fact more vivid than that of Qayyum and his brother Najeeb, though it is interesting to see the Partition from the other side of the border through the actions of Khan Abdul Ghaffar Khan, the Frontier Gandhi. Presumably, the London-returned Shamsie would find herself in a Vivian-like position in modern Pakistan. Barring Vivian, none of the women in the book make much of an impact – one flashes distraught green eyes in a quest for a sister lost in political carnage, but all the reader remembers are the green eyes and that is what the author obviously intends.

Shamsie’s work is filled with intricate detail, the balconies of the Street of the Storytellers for example, bouquets of peacocks that fascinate Vivian, and even the field of Ypres where Qayyum falls. The detail does threaten to obscure the story with its embroidery and Shamsie confessed to being relatively unfamiliar with Peshawar when she came to launch her book in Kolkata, which accounts for the depth of research that went into it.

Occasionally, her story telling too is as full of twists and turns as the streets of old Peshawar and sometimes proves to be fairly confusing, especially when she pulls a happy ending out of all the ancient stones and the bloodshed. However, A God in Every Stone has about it the character of a good old fashioned read, filled with nuanced language and breathless confrontations between past and present and East and West. Qayyum’s vision of the Emperor Ashoka throwing down his weapons on the fields of Ypres deserves mention as a moment where history and cultural memory unite.

Like Women’s Web and want to help us keep it awesome? Use our affiliate links below if you’d like to get a copy of Kamila Shamsie’s A God In Every Stone.