The Diary Of A Reluctant Feminist [Book Review + Giveaway]

The Diary Of A Reluctant Feminist is a darkly humorous book about the Great Indian Family's fight to save a daughter's marriage. 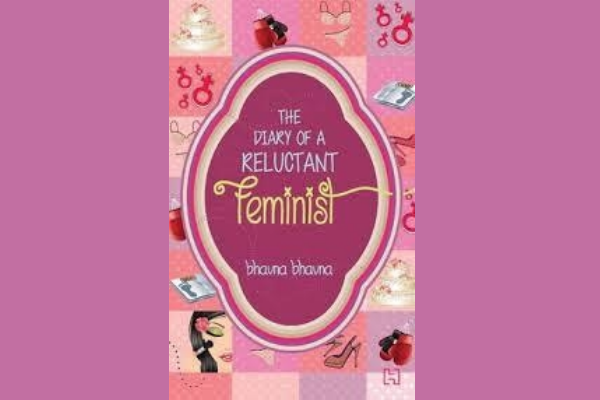 The Diary Of A Reluctant Feminist is a darkly humorous book about the Great Indian Family’s fight to save a daughter’s marriage.

Can the end of a marriage ever be funny? Is divorce good for a few laughs? How about the Great Indian Family and its well laid plans for its daughters which usually go along the degree-marriage-two-kids road? (Well, the degree if you live in urban India and belong to the ‘middle class’ or above).

If none of those things sound remotely funny, that only means more credit to first time author Bhavna Bhavna who brings them all together in The Diary Of A Reluctant Feminist and gives us many laughs in the process; although, by the end of the book, I found my laughter morphing from the ha ha hee hee sort of big, uncomplicated laugh to a more subdued, guilty snicker.

Yes, reading a book about a woman who spends her life doing what every good girl is supposed to do, and then finds out that socially sanctioned goodness has very little to do with happiness, will do that to you.

Without giving away too much of the plot, let me just say that this is the story of a woman who wants to get a divorce, (and so does her husband) – which is when she realises that her own beloved family will do just about anything to prevent her getting a divorce and ‘bringing shame to the family.’

Bhavna brings much dark humour to the table, and the protagonist’s upbringing in a large Punjabi joint family, her authoritarian grandmother and long-suffering aunts and uncles, girls-school-and-college life, marriage and the end of it are all presented with wit and a sort of staccato summing up of each stage of life. Yes, there is a little too much of Bollywood about the Punjabi family, and some of the cliches could have been edited out. By the end of the novel, the bullet-point summaries also begin to pall a little, like a Power Point presentation that is going on just a little too long.

Despite the humour, Bhavna managed to make me care for her gutless protagonist. (Is she also the author? I was never very clear, notwithstanding the mandatory disclaimer at the beginning). A woman who has left the biggest decisions of her life largely to other people, she comes into her own finally only when it comes to the divorce, and even there, it is as a ‘reluctant’ feminist. It is almost as if the utter failure of the marriage was the only thing that could have pushed her to realise that, hey, a woman taking her own decisions is not such a bad thing after all!

The Diary Of A Reluctant Feminist can be seen as one kind of book, but also entirely another. The easily digestible style with helpful summing up of every chapter means it is a sort of ‘time pass’ read. The pink cover screams chick-lit.

However, I also found it a telling commentary on what being a daughter can mean, even in a benign sort of Indian family – perhaps not too far from the kind of family that a Queen portrays. Beneath the humour lie some uncomfortable truths, and while the heroine, as a reluctant feminist, does not shout them out, they are nonetheless audible. In one sense then, it is a cautionary tale that family does not always know best.

If you’d like to pick up The Diary Of A Reluctant Feminist, you can do it through our affiliate links at Flipkart or Amazon India

And now for a giveaway!

Answer this question, and one lucky winner gets a copy of The Reluctant Feminist.

“When well-laid plans in life go awry, what is the best thing to do?”

Leave your answer as a comment below, and by 15th April, we’ll pick one winner to get a copy of this book!

Congratulations, R’s Mom! Your 10-point plan to combat life’s best laid plans going awry is chosen as the best comment, and we’ll get in touch with you soon to send you your copy of The Reluctant Feminist!