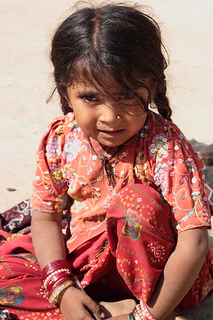 As I was taken out of my labouring mother’s womb, my grandmother was the first to look at me.

She started crying even before I did. Her shrill screech of horror resonated across the room louder than my mother’s pain: “oh no…it has happened…. it’s a GIRL!” and then of course, followed a dramatic explosion of emotion among everyone around. My father retired to one corner with his head in his hands.

She had expected a productive ‘heir’ to the family, a man, a protector who could earn and help the family prosper; not this useless dummy-piece of a girl who was later going to be sold with dowry that the family wouldn’t be able to afford.  That was how I received my welcome, on the very first day I dawned-  like I was not an infant, but a harmful stone that had been removed from mom’s womb. Later that day, some of my relatives suggested that I be killed or dumped to rot somewhere, disposable as I was. But dear dad took pity on me, and so I have lived long enough to come to this state.

I’m happy that I didn’t understand all this hatred towards me as a girl, when I was little. The truth of my position in life started dawning only later on me. I understood it the first time, as a five year old girl. My cousin brother Ram who was also my age, was to attend school the very first time. “Get him oiled, and bathed, and ready. He must look well groomed! He’s going to the school!” I remember my grandmother saying. “What about me? I want to look nice too. Take me with Ram! I want to go to school!  It will be big and nice and I can play! I know there are nice teachers and books!” I told my grandma, who uncomfortably shifted in her place and exchanged looks with my mother, whose face looked downtrodden upon my innocent words. Of course she knew that I, as a mere girl, wouldn’t be allowed to attend school.

So I never went.  I stayed at home. When I was little, I used to help mom clean the vessels and listen to the gossip of the old ladies on the verandah whenever I got bored.  I used to stare longingly at the beautiful books that Ram took to school every day, and envy the way they got bigger every year. Sometimes, I would sit to look at those books, but I wouldn’t understand a word.  Mom soon gave birth again, and to everyone’s delight, to a boy.

At other times, I would look outside at the bus that shuttled back and forth between our village and the town, and wonder what the big, sophisticated town would be like. I could only go if dad took me, but I was too scared to ask. I knew Ram’s school took him on trips to see and observe the town, many a time. He also seemed to be able to easily join in adults’ complex talk of big numbers and cities outside our state, though like me, he was only eight at that time. The only news I knew was the local gossip and who fought with whom and which woman has the most marks from domestic abuse. I was terrified because I knew my situation as a wife was going to be the same one day.

When I turned twelve, I was sent to work at the construction site of a large house in my village, for a wage of about fifty rupees every day, so that our family could continue to pay for Ram’s increasing cost of education as he passed through higher grades and also support the little new arrival of my brother in the family. Ram now sometimes read those enormous paragraphs about money and things on the newspaper. Meanwhile, I learnt to cook a hundred meals, to tailor them to the varied liking of my dad and, then, Ram, the ‘men’. After working ten hours at the construction site, I would come home and help mom clean up, and then take care of my little brother.

At night every day, grandma used to tell me about how I should be when I grew up. She would tell me I’d get married in a couple of years and about my duties as a woman. I was a girl, so I had to be humble, I had to be wise enough to rise above my own longings and sacrifice boundlessly. I was a girl, so I should learn to tolerate every sort of treatment, and bear my family’s weight till it crushes me. As a wife, I would have to surrender to the utmost god that my husband, to me, would become. I had to be strong, fully selfless and absolutely tolerant and unquestioningly submissive. “Never raise your voice. Don’t give your opinion if it’s not requested for. Don’t have contacts with men, as you are growing older. Otherwise, you will be an incapable woman unworthy of life…” and so she would preach. This was my only education.

Some months later, a disaster befell my family. Mom got severely ill, and then abruptly died.

Dad then told a twelve year old me that I was in charge of all the household duties.  For a couple of years after that, I was the new mother in the family, to my little brother and to my cousins including Ram. Doing household chores and taking care of everyone became my life.

Then, just as my grandmother’s words had it, I was married at the age of fifteen. I saw my groom the hour he was to marry me. Of course, except for me, everyone had seen the groom weeks in advance. But, following the duties that had been so well etched on my heart, I showed nothing on my face and remained silent. Thankfully, he was only fifteen years older to me, unlike some girls I knew who married men as old as their father.  He looked okay, but his manner seem disturbing . What could I do? That evening before leaving with him, or should I say, trailing behind him, I went to my grandmother. for the first time, to cry, as, in the absence of my late mother, I had no one else to turn to. As another woman, she had only tears to offer as a comfort to me, so she cried along.  The choice of the groom, she told me, was because he was the only affordable groom with a relatively moderate dowry.

Soon, just as I had been dreading, I joined my village club of abused women, but I atleast I was luckier than most. I managed to remain largely uninjured. Most of the time, this man acted lovingly.

Soon, I got pregnant. This was the most joyous time of my life, and for a while he was completely gentle. And then my baby, a girl child was born. I accepted her with all my love, though the same reaction didn’t emerge from the rest of the family.

One fine night, when our child was one year old, I woke up to find my husband missing. Searches were made, and my dad nearly collapsed in terror, women picked hungrily on this fresh topic, and I was stricken with fright and anxiety. But he was not found.

After that, I returned  to my father’s house, as a huge shame and an unbearable economic burden. But I had a daughter to raise, and no place would offer me work.

Fast forward this a forty years, I will tell you where I stand today. On the road. You just passed by me, as I was begging on the sidewalk of the streets, hovering in midair, helpless, With no honour, no source of income.My dad has died. My daughter is married.  I am seventy, incapable of working, not knowing whom to reach out for.

And this is the India in year 2013 I am talking of, not the distant past.

I am not alone. One in every three girls in India is illiterate. Every third one of your Indian sisters is uneducated. Amazing, right?

What are you doing about this issue?

This story is not entirely fictional , but is a partly real life account of the life of my brave, beloved great grandmother who still lives in India. She is illiterate (had passed grade 3 ), but then dropped out of school to take care of her siblings after the disability of her mother. She then got married early, and after giving birth to my grandmother, her husband left her. Luckily she has a supportive family, whom she now lives with and I am lucky to be her grand-daughter. I am proud of her sacrifices, but the point is, there are so many more illiterate girls in our country, who have no self-dependency of their own, because of the lack of education. How are you helping? Educate a girl child today by sparing just a little fraction of your money to funding a girl’s education. Ensuring education to our Indian brothers and sisters in our duty as citizens. Do something today!

Here are some organizations through which you can fund the education of a girl child to help. It starts at rates as low as Rs.400-500 a month.

Pic credit: B Fatty (Used under a Creative Commons license)

Is Marriage Just For A Girl To Lose Her Dreams And Serve The Man She Married?