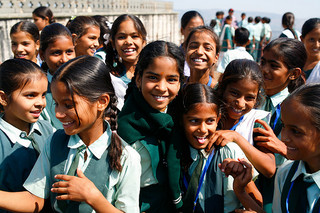 Girls Rock? Well, of course they do. In so many little ways that one does not even notice.

Mini Pandey was born with deformed legs and staggers when she walks. Her parents abandoned her at birth and asked her maternal grandmother to give her up to some orphanage or adoption home. The grandparents decided against it and raised her hoping for a change of heart at a later stage. The child grew up to be a sweet tempered girl spreading cheer in and around her. Her mother’s younger sister and brothers loved her a lot and would not hear a word of complaint against her. They coached her at home since she was unable to manage without help in school. She was the darling of the entire neighbourhood.

In due time her aunt got married and the older of her maternal uncles got engaged to a local girl. Not knowing what the new bride’s reaction might be to her presence, Mini’s grandmother sent the ten year old to her parents in Lucknow. Mini describes the four months that followed as the worst in her life. She was locked up in a room and forbidden to interact with anyone including her own sister and brother. In short her parents were ashamed of her deformity and wished to keep her hidden from the world.

However, her maternal aunt turned up one day to see how she fared and on witnessing the torture that she was being subjected to, brought her back to Jamshedpur saying that it would be easier to convince the brother’s future wife to treat her well than to expect her parents to show any compassion to the child they had abandoned at birth. Her decision proved to be the right one. Her maternal uncles and their wives love her like a daughter and she too reciprocates in equal measure.

After answering her 10th board exams Mini joined our college for her Intermediate course. I have written about her in an earlier post. She is an inspiration to anyone who gets to know her. Ever smiling and always willing to help her class mates who are weaker than her, she is easily the most popular among her peers. She is polite and courteous, confident, gracious in accepting help when required, acknowledging their kindness with a thank you, easily standing apart from the crowd – one cannot help noticing her.

This year Mini was given an award by the Bhanumathi Neelakantan Trust that gives an one time award of of Rs. 10,000/- to each of six women in different categories. Our college recommended her name in the handicapped category but since she was also an outstanding student, wrote poetry and was considered an all rounder hers was considered a special category and we were very happy for her. She and the other award winners also received an additional amount of Rs. 7,000/- from other philanthropists who attended the function not to speak of gifts of cakes and casseroles, bouquet and cards that they were given. I am sure all those who were awarded rock in their own way. What makes Mini different? It is most certainly her attitude. It is difficult enough to deal with a birth defect but when it is coupled with disdain and contempt from one’s own parents anyone would break down. It requires a lot of inner strength and a sound mental conditioning to set aside one’s setback and maintain a positive attitude. I end with my own experience with the girl.

I was once nursing a bad cold coupled with a sore throat and was unable to take class when Mini’s batch came for their class. I gave them some books to read and asked them to ring me up before the next class and confirm whether I was available since I planned to take a few days leave. All the other students rang up and asked me whether I would be taking their class but Mini was the only one who first inquired about my health and spoke of my availability later. That, I felt made her different and set her apart.

While I dedicate this post to an exceptional girl I am equally in awe of Mrs. Bhanumathi Neelakantan. She is one person whom I regret not having known personally. Her career academy for women enables girls in the Steel City to be self reliant and the Dakshin Bharatiya Mahila Samaj is doing exemplary work in the field of education. At the age of 75 she exudes an energy that youngsters can well emulate. In short I know of one Mini Pandey who rocks but Mrs. Neelakantan encourages hundreds of them leading by example. May she continue to be an inspiration to those around her as well as to people like me who revere her from a distance.

Since today’s post is in the cause of girl’s’ education, another changemaker that we’d like to highlight is Pratham Books. With a mission to bring affordable books to children across India, Pratham is filling a void in the lives of the many children who would love to read and expand their worlds.

Pratham’s work is of course relevant to boys as well as girls; nevertheless, we are including them in #GirlsROCK because we believe that books that are sensitive to the realities of children in India, yet encourage them to read and dream are among the tools to bring about change for girls in this country. Books with girls like them, doing, learning, having fun are among the best ways for girls from remote regions to access another world and learn that they can hope for more.

You can support Pratham Books’ work in many ways such as donating money or books, volunteering your time, or even helping to set up a library in a village you know. You can follow Pratham at their Facebook page or at Twitter.