HELP! There’s A Teenager In The House!

All those rules for parents and teenagers? Here's news from a mother: They don't work! 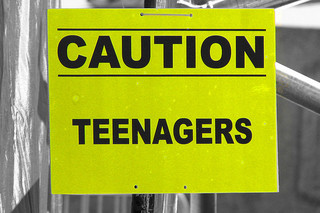 With a Ph.D Degree in Clinical Psychology, Dr. Rumy Agarwal is a dedicated home-maker and her life revolves around a devoted husband and two young sons. (Pssst……however, so much testosterone under one roof does do her in sometimes…..). She is an incurable romantic and believes that love is all about sharing the simple joys of life. But she has kept alive her passion for pen-pushing by writing regular columns for newspapers and articles/stories/poems for popular English magazines as well as blogs.

Whew, I must hand it to myself—I am a survivor! I have survived, relatively unscathed, the Terrible  Teens of my sons and I am living to tell the story!

Come to think of it, when I was in my teens, things didn’t seem quite so turbulent. In fact, it was a wonderful time. Oh dear, how things have changed…or maybe, the perspective has—I am on the other side of the fence now, the “enemy” so to say, in the war of the Winsome Teenagers Vs the Demonical Parents—so I see things in an altogether different light now. Maybe my Mom did too, back then, but why dredge up old issues ? The cycle will go on, the war will continue and wisdom will always come in retrospect. (Sigh!)

The modern Mom is educated, intelligent and aware of her parental responsibilities. Period. Translated, it means that she is more easily persuaded to buy books/read up literature/attend seminars on “Parenting”, as if doing so will better gear her up for the arduous task ahead. But disillusionment sets in soon enough—almost as soon as she says the word “Teenage”. In a flash she then knows that all her reading up and sitting through verbose, pontifical seminars aren’t really standing her in good stead—in fact, they ill prepare her for the actual experience! Rule #1 : Spend time with your teen. When Moms get down, in all seriousness, to the business of parenting teenagers, they find that the first thing on the agenda (put there by “Those Who Know”, a.k.a. the authors and seminarists) is “spending quality time” so that the teenagers do not feel beleaguered in a world filled with overwhelming issues. Since mothers agree with the wisdom of the advice, they diligently map out their schedules in such a way so as to find time to nurture their teens’ souls. But check out what happens:

Mom: (Pretending to be full of beans so that progeny thinks that Mom is on the same wavelength as he/she is).Yoo-hoo! Guess what, we have an hour on our hands with no pressing things to be done! What say we spend it together……….doing something, taking a walk, going somewhere…or just talking……huh? We could make this an everyday thing….what do you say?

Teenager: (Trying not to look too horrified) Please wait till “The Simpsons” is over.

(Very matter-of-fact statement of priorities, I must say).

Mom: (During commercial break) I was thinking that checking out the Book Exhibition could be a “cool” idea. (Note the attempt to speak teen language—mothers can be so earnest really!)

Teenager: Actually…..I have to meet a pal of mine…some other time, okay? And hey, with me out of your hair, you can spend some time by yourself in peace. Ha! Ha!

At this point, the mater really doesn’t know whether to feel mortified or relieved!

Rule # 2 : Find out what’s going on in teenagers’ lives : the listen—advise—support routine. So Mama says, “Let’s have a talk” and teenager’s ears immediately perk up (“Don’t much like the sound of that”). In most cases, he/she suddenly remembers an urgent phone call to be made or an academic assignment or just about anything which can even remotely pass off as “urgent.” If he/she hasn’t been able to be quite so imaginative, he/she will fidget for a while, wear an expression of one facing intensive police interrogation and then excuse him/herself to go to the loo and then stay there till your patience or enthusiasm has evaporated.

Rule # 3 to fly out of the window—To teach them to do things by themselves, set an example they can emulate. So, you make your own bed, pick up the dirty dishes, put used things back where they had been taken from and so on. Then if you turn to look at teenager for ditto action, you’ll find his/her eyes and hands conveniently busy elsewhere. Sometimes they’ll do these mundane jobs—that is, if they are in an expansive mood (which doesn’t happen too often) or they are in an expensive mode, which means you’ve got to loosen your purse-strings for something they “must have and everybody else has it” (this happens more often).

You always think and say (“suggest” is more like it) what is best for your teenager, right ? Ha, that’s your   point of view, not your offspring’s. Teenage attitude screams out loud that if they need your advice, they’ll give it to you! No need to feel crestfallen Mama dear—just take it as a golden opportunity to teach the teenbrats some self-reliance. Ultimately you’d want them to fend for themselves and stand firmly on their own two feet, so why not start now ? A few early knocks in life will sober them down and also show them that Moms are not “such bad eggs” after all and there is some sense in what they say.

Rule # 4: Answer all questions honestly and simply, especially those about the birds and the bees. This is what Moms fret the most but they needn’t worry any more ‘coz the very rule itself has become outdated and irrelevant in today’s times. It is the age of pixel images, remember? And with so much information piled on by the media, the teenagers can tell you quite a few things that probably even you didn’t know about the subject. So chill out, relax, you will not have to spell out embarrassing details of the act—they know enough already.

Jokes apart, you don’t always encounter rough weather while sailing through your teenagers’ wonder years. It can be quite an enjoyable journey if the attitude on both sides is that of friends rather than adversaries. And whether they admit it or not, the bratpackers really yearn for love and leadership from their parents—less of either makes them feel that you have failed them.

Ah, and at the end of every battle—and there’ll be plenty of those, even if there is no actual war—they’ll blame you anyway. Their emerging egos will not have it any other way! And no matter what you do, you’ll always be told in no uncertain terms that you just don’t understand them! So don’t even try, ‘coz you won’t. Just outline the behavioural parameters within which you wish them to operate and be sure to enforce them; there’s no scope for timidity ‘coz it is detrimental for you, your teenagers and the relationship you share. And then, just love them and look over them always. One day these blooming adults will thank you for that.