Who's better - mom or dad? A mom weighs in on the 'My Daddy Strongest' syndrome. 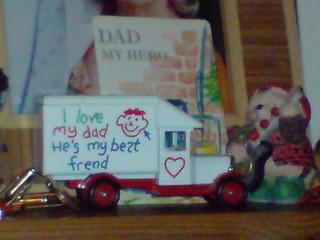 It knocked the daylights out of me; hit me right between the eyes; jolted me inside out! What was it that scored such a neat 7+ on the Richter Scale, you may well ask. A realization, my friends, a simple realization that I am probably the stupidest, daftest, most naïve woman on this planet ! Wasn’t that enough to take the thunder out of my sails ? You bet it was. Anyways, why this self-damnation ?

Because it occurred to me that I slog my butt off at home to provide a happy and comfortable environment to my two boisterous teenaged sons whom I dote on and thought that they doted on me too, (I mean, how could they not, given my devotion to their cause ?), but what the hell, I had only been deluding myself because evidence proves otherwise. Boo-hoo, I was such a fool, such a blooming idiot !

All these years I preened myself thinking that I was the pampered minority in my family—the only female among four members and, therefore, handled with love, attention and respect. Gawd, how could I have been so blind? All that “love, attention and respect” was my bubble-headed interpretation of plain, simple “tolerance”, tolerance of someone needed  to do the “boring” (but essential!) chores like cooking, ironing, sewing, cleaning, helping with the homework and School Projects etc!  The actual (and to them, “deserving”) recipient of their adulation is their Daddy-O. My bubblegummers love and adore their Dad so much (to be honest, so do I, but that doesn’t count in this scheme of things!) that he is Nos.1 to 9 on a list of 10 people they love and enjoy spending time with. And if you are thinking that the 10th slot is for the (Rahul) Dravidian (read “ever-dependable”) Mom, think again. Because the 10th place has been taken by none other than our beady-eyed Pomeranian, Fluffy Agarwal (who is, after all, a male). So where does that leave me ? Out of the celestial loop, of course.

You think I have a touch of the sun, that I am deliriously imagining things ? Well, the time has come for me to provide the evidence, it seems. So read on and decide, m’lords/m’ladies. Waking up my sons in the morning is a harrowing experience. Stupidly basking in the joys of motherhood, I start off by mollycoddling them in my jujube-sweet voice, asking them to rise and shine, appealing to their innate goodness and telling them what a glorious morning it is and one never knows how promising it may turn out to be, blah blah. In response, I am greeted with grunts (which sound suspiciously like “Get lost” or “There she starts again….”) and about half-a-dozen “Positively last” five-minute extensions, at the end of which my patience is in tatters and the brats wake up in the foulest of moods, with me as the ultimate spoilsport ! But if their adorable Papa is entrusted with this job, it is a whole different story! In his no-nonsense voice, he just asks them to get up and get on with their morning ablutions. And lo and behold, so they do ! (Meanwhile, I pretend not to notice the smug expression on my spouse’s countenance). How does he achieve this feat ? I am darned if I know and hubby’s not telling.

Papa dearest has a larger-than-life image in the eyes of my teenyboppers. I know, because I (oafishly!) helped create this very image ! How was I to know that I was gonna have this foot…nay, thigh-in-the-mouth syndrome when I repeatedly dinned it into my sons’ heads that their Papa is the greatest ? That there was only one of his kind in the whole wide world? Well, sure I meant every damn word and I’m glad my sons lapped it all up but that doesn’t mean that I have nothing to my credit ! Thanks to me, their Papa strides like a colossus and demarcates his own territory—ah, there’s the catch—his “territory” does not include mundane stuff like helping with School Projects, dictating l-o- n-g answers from history books and “feminine” (how convenient!) stuff like that. For these things, there is always Mama.

Saying a firm “No” to a child’s unreasonable demand is the best way to deter him—so says the counselling psychologist in me. But the mother in me has never achieved even a modicum of success with this approach ! Whenever I have practised what I preached (as a shrink!), I got voted as “the bad guy” who always spoils their fun and is not half as understanding as other mothers……ad infinitum. And maybe all I had tried to do was say “No” in their best interest ! The unfairness of it all hits me when their Dad goes scot-free by giving ditto negative reaction to ditto demand, and in a far stricter voice and manner as well. Does he have a halo around his head which the rogues can see and I can’t ? And believe me—even though the boys never will—that when they get goodies and treats from their Daddy dearest, it has been the little woman (yeah, dear ol’ me) who has pushed the right buttons and motivated the Santa Claus avatar of him! Now can you blame me for wallowing in self-pity?

Wait, there ARE times when the tables are turned…..well, not exactly a full 360 degrees, but slightly rotated, and those are the occasions when I can afford to puff up a little and strike “deals”. For instance, the elder heir’s pals have planned to go to a movie and he too is dying to go but Dad has said a firm “No” (albeit justifiably, seeing that the ogre of exams is already in the vicinity). Now here is where the eternally soft-hearted Mama can step in and put in a good word to Papa. So sonny gives me his gooey-eyed look which he knows will melt me, and appeals for “recommendation”. At times like these, I try to sound casual and business-like (as opposed to the silly-and-approachable-golden-retriever attitude I usually have) and ask for remuneration.

WHAT ?? Yeah, remuneration. “Remuneration” as in a couple of extra hours of study, or a couple of hours less of TV, no fighting with bro when I am watching “The Bold and the Beautiful”, no nose-wrinkling on the meals served etc. If I maintain the hard stance long enough, I usually get what I want….at least, for a while…..er, for a short while really, that is till the euphoria lasts (which is about a day at the most). But then, I have always been grateful for the smallest of mercies!

At the end of the day, I have understood that our moms and aunts have handed down a myth to us  that girls adore their dads, while the boys are soft on the female parent. Sons or daughters, they put their father on a pedestal and focus on the mother’s clay feet ! But then , so what ? Why shouldn’t I look at the brighter side of things, like I always do ? (The eternal optimist, that’s me). If Papa is the best, then why not leave the disciplining and nay-saying to him and remain the benign, benevolent Mom in the sons’ eyes ? Come to think of it, that’s not such a bad idea after all……I do the cooking etc. and hubby keeps the monsters in leash and if he gets all the adulation, let him. For me, it’ll still be a bargain. C’mon, join me gang —your Daddy’s strongest!

With a Ph.D Degree in Clinical Psychology, Dr. Rumy Agarwal is a dedicated home-maker and her life revolves around a devoted husband and two young sons. (Pssst……however, so much testosterone under one roof does do her in sometimes…..). She is an incurable romantic and believes that love is all about sharing the simple joys of life. But she has kept alive her passion for pen-pushing by writing regular columns for newspapers and articles/stories/poems for popular English magazines as well as blogs.