Being a female atheist in India comes with its share of challenges, as women are expected to be the preservers of culture. 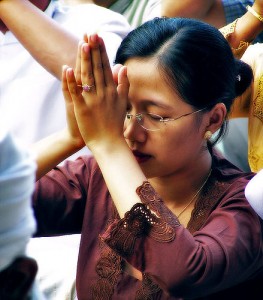 Back to the academic world for M.A English Literature after a brief career in teaching pre-primary classes, Deepthi is interested in reading and exploring the plurality of voices which reflect the present social scenario. She particularly loves long walks and a good game of badminton.

In the teens, being a non-believer with no particular affinity towards any religion was much easier. The non-believer part was kept well under wraps, though being irreligious wasn’t. There was a cover under the refrain, uttered not so hopelessly by near and dear, “she’s like that”. Not that the criticism mattered, but it helped avoid needless confrontations when the hormones were on the high!

Marriage puts one along the focal length of observation, and with the addition of children to the family, I wasn’t exactly thrilled to be right under the magnifying glass. Free dispositions on the holy lessons that should have been a staple in a family and passed on to posterity without a shadow of doubt were, hmmm…Aplenty.

I grew up in a family rooted in worshiping god. And the family I was introduced to through marriage is again temple-going and puja-performing. Religion, god, culture is a kind of sundae with intermingling, and blurring layers. Being a female, has a particular catch in the patriarchal eyes. The wife is expected to ensure the well-being of the family through religious observations and rituals. Seeing that I am less inclined to take them up on my own, I used to get some questions preceding religious days like janmashtami, as to what my plans were. I deal them with the truth, “nothing particular, it’s a usual day” .My intention is not to create any disharmony, but live as I believe. It’s not in my interest to get engaged in unpleasant exchanges. And what can be better than saying it openly in a non questioning, matter of fact way. Lo, exactly what I did. Then I hear this,

“For the children’s sake…they will be confused”.

A ready reply to that, “Oh, they will learn if they want to”. That and a smile sufficed. No more suggestions followed.

My children are not the custodians of my beliefs. Well, there will be confusions along the way, living in a community adhering to much of the religious observances and holidays revolving around them. And since my partner has the same take on things, it shouldn’t be that tough on me. That doesn’t mean it’s easy for the children. Questions will emerge, explanations sought. I am there with them, in their journey.

I want them to believe in things they do, only because they want to. Not because god wants them to.  My daughter who is nine is completely at ease in believing the stories they hear about God as mythological stories. And we have open discussions. She is at ease with me being a non-believer. My 6 year old son is not. He likes the way my mother-in-law lights the lamp and offer obeisance, when she comes over. He likes to do that. And on the days he remembers, he does. Faith is their choice. They have the absolute freedom to pick what they feel like.

Granted, there are many things beyond the scope of the human mind, but everything that is outside of our comprehension, do they have to be attributed to god? “Then what”…my grandma asks, (It is all ‘bhaghvan’s leela’ for her)..I tell her, “I don’t know”. I am perfectly fine not knowing. The questions on the mysteries of this cosmic world, well…let them be mysteries. Those working at unravelling those perhaps can give better answers on that. I choose not to offer god as an explanation to things I don’t have an answer to. It can be sought and found or sought and not found. In life we need to come to terms with things not understood.

My ancestor’s god needn’t be worshipped just because it’s from the past and hence something to be conserved. My choice is not to be a curator or a propagator of things  I don’t believe in. Nor our existence will lose meaning without the god factor. There’s meaning in  the lessons learnt  as we move forward. There is meaning in continuing  to evolve and becoming comfortable in one’s own skin. There is meaning in a lazy afternoon spent home. Along the way, mistakes are made, achievements celebrated, relationships broken and friendships made. Yes.No.Cry.Laugh.Love.Live.