Working women in India make multitasking look easy, but lets not forget that they need family members to pitch in equally at home too. 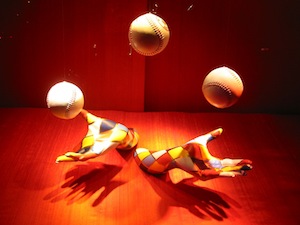 Deepti Mahule (Nalavade) is a software engineer by profession, and enjoys traveling, reading and writing. She maintains a blog called Dancing Fingers Singing Keypad. One of her short stories was highly commended in the Commonwealth Short Story Competition 1999, run by the Commonwealth Broadcasting Association and another short story was published in the bi-monthly e-literary journal Muse India in the issue for March-April 2012.

Working in the software industry is at times similar to working like a beast of burden plowing the earth on a farm from sunrise to sunset, with the whip of stringent deadlines and living up to quality standards cracking above one’s back. This software field just like the field that the animal is plowing, shows no mercy to any kind of human irrespective of class, creed, race, gender, nationality and neither does it care much for time zones.

An incident comes to mind, that highlights how women and specially, Indian women in this industry work as jugglers in the circus called life by trying to balance career and family. I am an Indian female software developer in the United States but this narrative is about the female QA (Quality Assurance) resource living in India, who validates my work. When the sun rises for her there, it is setting for us here in the United States. In spite of the time difference, we have worked together on many projects and everyone in the team appreciates her good work. During one such project, I was chatting with her online one morning about the work to be done. I informed her that the task on hand was required to be finished by 3.00 U.S. time. What I forgot to say was that it was to be done before 3.00 p.m. tomorrow. She misunderstood that it had to be done on that current night itself and her response naturally contained heavy concern. But it was something she said jokingly towards the end, switching abruptly to Hindi – something that came straight from her heart, a sudden wave of relief – that made me chuckle instantly and then reflect on it later on. The conversation on chat went something like this:

(That’s good; otherwise maa-in-law would throw me out of the house)

In the past few decades, the Information Technology industry in India has taken root and spread its tentacles widely. Women constitute a large number of the workforce in this field. They are capable, hardworking and ambitious. But one must not forget that they apply this effort in not only the workplace but at the home front as well. Working women in India is not something new and there have been women pursuing careers even in the past, before the existence of the software industry. However, the number of such women has grown and the number of working hours as well as the effort (due to cases where clients and colleagues are spread all around the world, in different time zones) has increased as well.

Just as all employees irrespective of gender are treated equal in office in terms of work shared in teams, both men and women need to be treated the same in the household as well since a family is a team, too. Every woman will always want to do her best in career as well as look after family needs – it’s a constant tug-of-war – but it definitely helps to make matters smooth if everyone in the family pitches in with chores, encouragement and support.

Remembering our chat conversation, I marveled at all the multitasking that is done and tried to think of an Indian goddess with only two arms but none came to mind and I suddenly realized why they were almost always depicted with multiple ones!