Rape culture is what lets rapists think they can get away with rape. How do we end this rape culture? 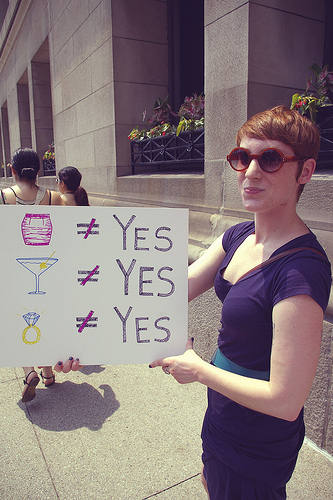 Let’s talk rape culture. Because that’s what allows rapists to feel they can get away with rape.

I’m glad we’re talking about this, and sad that it took so much for this to happen. I’m so inspired that people are coming out of their homes and saying, “No. We want an end to this.”

I am hoping that now that we’ve all agreed that

1. The rape of a young woman (who’s kind of like the rest of us – she’s in college and was going home from a movie) – her brutal, horrific rape, so brutal that it later killed her

is not acceptable, we might move on to agreeing none of these are acceptable:

2. The rape of a woman who lives in a smaller town or even in a village: someone who’s more removed from our comfortable lives

3. The rape of a woman who maybe isn’t middle-class but poor, who is maybe “lower caste” or tribal or someone who doesn’t look like us

4. The rape of a woman who doesn’t, perhaps, fit our ideas of how an Indian woman is supposed to behave – she might drink, for example, or be sexually experienced, or even take drugs, or even be gay. Do you think, by then, we will stop caring about the victim’s “character” or implying that by living her life she was inviting rape?

5. The rape of a woman by her husband (oh wait, that’s not rape!) or boyfriend

6. The rape of a sex worker – even though we don’t usually think of them when we think of Indian women

7. The rape of a trans woman or a man or an older woman or anyone who doesn’t fit our ideas of how a rape victim should look

How do we get there? How do we, as a society, get as outraged by every kind of rape as we are by the rape of someone who might, but for the grace of god or the luck of the draw, have been me (or my daughter/partner/sister)? Every time you talk about a victim’s clothes or lifestyle or sexual experience, you are making it more difficult for another victim – of rape or abuse or assault – to come forward. You are making the women around you feel unsafe, because they know they will be blamed if something like this happens to them. Just stop it. If someone else brings it up, refuse to engage. Tell them it’s irrelevant. Walk away from the conversation – after telling them that crime is never a victim’s fault.

Don’t use misogynistic slurs or make sexist “jokes”. Don’t call a woman a bitch if she won’t agree with you, or joke to your married friend about who’s wearing the pants in the house. Don’t use “rape” as a synonym of “treated badly”. Don’t treat abuse or sexual assault of any kind as a joke (“of course I would love to be abused by a woman – I’m a man”).

No, women aren’t women’s worst enemies. Women aren’t the worst offenders in the patriarchy – some of them work with the system to reap its benefits, yes. But they didn’t set up the system. They aren’t the oppressors.

Women are people. Who can probably tell you what they are like or what they want if you can just shut up and listen.

Don’t stereotype men either – no, you can never find your socks because you are a lazy stupidhead, not because you’re a man.

6. Don’t be friends with misogynists

That friend who does all of the above? Talk to him, and if he refuses to change, dump him. There are non-misogynistic people in the world, and we should all be friends.

This is the most difficult thing to do, in my experience. Speak up when a friend or family member says something misogynistic. Share your experiences – of sexism, of abuse, of harassment – with friends you trust. Offer your support to friends who are facing those things. Give them a safe place to talk about it – a place where they won’t be judged or blamed or their version of events questioned. Make it easier for the women in your life to speak up when they face all this – by showing them, by the way you talk of these issues, that you will support them, that it’s not their fault.

No, this isn’t easy. I have done most of the above at one time or another. But we have to get there. We have to shake off the misogyny – internalized or otherwise – that we’ve been steeped in and raised in and covered with. We owe it to our daughters… and to ourselves.