A tongue- in-cheek look at the modern husband and the importance of wives in their lives!! 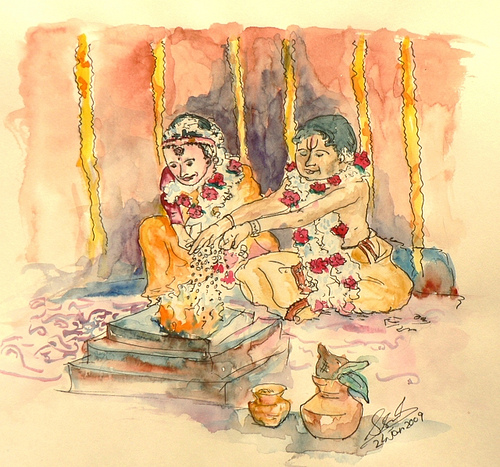 Guest Blogger Barnita De is a Bengali by birth, brought up and educated in Kolkata. Working in Bangalore for the past 12 years she has 2 daughters aged 8 and 4 who are her world. She loves gardening, crafts and cloth work like applique.

A tongue-in-cheek look at the modern husband and the importance of wives in their lives!

I am married to a “new age” husband. One who believes in equality of the sexes, one who does not think that the wife is a doormat, one who truly believes that the wife has as much say at home as he. Or is it?

Ours was an arranged marriage – through the matrimonial columns which all Indian newspapers duly carry. The usual “verifications” before marriage included – is the groom “broad minded” – meaning does he have an objection to his educated wife working post marriage!

After marriage, the husband was found to be indeed “broad minded” – had no objections to his wife working or being late from work. He understood the ups and downs of office life, felt the wife’s anguish when she was overlooked for well deserved promotions and shared in her joys. He appreciates her likes and dislikes, even if they were opposite to his own. Such an understanding husband isn’t he!

Well he also “understood” that the wife is also “new age” – she can run the home smoothly on her own, she can do almost all the work the husbands generally do…. and much more! She does not need anyone’s help. She is well equipped to handle all matters on her own. Name it and she is a multi-tasker in all – Banking, Investments, IT Returns, Municipal taxes, Loans, Property related matters.

The wife finds that she is the one holding the reins of the home – not that the husband stopped earning but then if “she” could do it and more efficiently than him, why not. He has no qualms about his wife handling it all. No male ego is hurt. No masculine pride is damaged – you see he can relax and the watch the soccer match or the Modi Vs Rahul battles on TV, while his wife completes the “mundane” tasks. He thinks of the well being of the country, while the wife thinks of the family. It’s the bigger picture you see.

Every year in June, he duly forwards the Form 16 to the wife (not even aware that it needs a password to be opened). It is the wife’s duty to file the IT Return. Not only does she file it, she ensures the acknowledgement is filed away.

Ask him when and how much is required to be paid for Municipal Taxes, he draws a blank. Promptly forwards the query to the wife.

When a friend buys the same model of car as them and asks the husband where the heck is the boot release button, without a blink, he asks his wife the same thing.

Colleagues asking him for his advice on home loans, he calls the wife and asks – did we take a fixed rate loan or a floating rate loan?

The wife requests him to put up the Diwali lights for 5 days at a row; plugging electrical stuff is a man’s job you see. On the 6th day the wife has had enough; she puts up the lights herself and ensures it is lighted up by the time he comes home. She smirks to herself – at least on seeing it, his male ego would be hurt! She can rub it in! The husband returns home, does not even notice the lights in the balcony. On a gentle nudge when he is forced to notice it, shrugs it off saying, “What is so great about it. I never doubted your ability to do it.” What the…..?

On the home front, he is a lost puppy…. at times. When in need of a fresh towel, the wife being busy in the kitchen, asks him to take it out from the guest cupboard. He opens the cupboard and looks at it in utter bewilderment. From which shelf should he start the search for a towel!

As a new-age wife, do I have an issue about it? An emphatic yes and no! I rave and rant about it when it suits me – why do I have to do all the work, is the family responsibility only mine, why is he such a novice about such matters that he cannot do it himself, blah, blah…. But I am also very happy and proud of such a husband. He is truly caring, understanding and considers his wife his equal. He does not think his wife’s place is in the kitchen. He appreciates the work and effort the wife puts in and respects her for that.

In an age where newspapers are full of gory news items of wife burning, beating and all kinds of marital atrocities, I thank God for my “new age” husband. I belong to that minority who is not scared of her husband; he is not my “pati parmeshwar” but my best friend. We are equal partners in the journey of life – balancing each other’s strengths and weaknesses!