The New Bollywood Woman: How New?

Women in Bollywood seem to be getting to play bigger roles, but are female characters in Indian cinema really getting stronger? 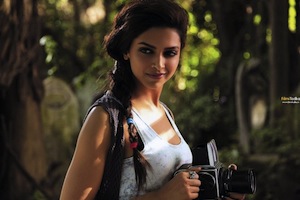 Guest blogger Smita Lal is a freelance writer and a theatre artist actively involved with the Asmita theatre group, a socially and politically involved theatre group active since the last twenty years. She is an actor with them. Originally from Delhi, she has studied Media and Global studies in the UK. She writes on myriad topics on lifestyles concerning different cultures besides doing full time theatre.

Well, recently, there have been a few winning formulas in Bollywood, the modern and uber cool female protagonist with a mind of her own…unaffected by the prevailing and jaded stereotypes, fighting her own way to be what she wants to be and coming up as a sure shot winner. The heroine is not just a femme fatale or a symbol of divine chastity but a heady mix of both somehow. And she doesn’t shy away from flaunting her sexuality, it’s not wrapped under demure pretensions or as a miss two goody shoes…she openly carries a sexual tag with aplomb…in a definite larger than life situation she is bold, brazen and a bare-all social vixen…and definitely propagates for ‘live life king-size’ (well, it does come with her own statutory warning as well just like the cigarette ad). There is a no doubt about the fact that these movies have created a niche, for a more substantial treatment being given to the role of the actresses as we have in the case of Vidya Balan or Deepika Padukone as Veronica or Sunny Leone.

But the fact of the matter is: is this coming of age triggered by sexuality being accepted in a dignified manner or does it still have its own shades of apprehensionsand objections?

Let’s start with Veronica , the character played by Deepika in Cocktail. She is bold, sexy and strong headed, loves partying and yes, boasts both of drinking and shrinking dresses and she doesn’t care a damn about what people think. She is all about having fun and finds a man who finds all these aspects in her as divine attributes while getting drawn towards her until the laws of attraction redefine their preferences and he falls in love with the demure, shy damsel in distress, miss two goody two shoes – Meera, a girl you can take to your mother and suddenly his male chauvinism is challenged (of course induced by the testosterone) and he drops Veronica like a hot potato and starts wooing Meera who obviously is not able to resist his juvenile charms and after dragged on self-denial (essential drama) gives in to him.

Suddenly we have Veronica transformed into an emotional, vulnerable creature, thrown in as a hapless, lonely and miserable woman who would do anything to become anything for her Adonis in question. But her attempts to become a a salwar clad and biryani cooking nice girl proves futile as our man Friday already has won his new trophy. Oops!

And this comes from the new generation of creative minds who have redefined the meaning of Bollywood, who gave us movies like Rock star, Being Cyrus and Dil Chahta Hai… they couldn’t help but succumb to the pot shots of the mainstream!

Or let’s take another bold movie, Dirty Picture, coming from a woman who earned name and fame through her regressive and repressed characterisation of an ideal bahu, wife and daughter, where protecting the honour of her family values above everything else matters; a self-sacrificing role model of an Indian woman who would keep aside her self-respect, happiness and identity to protect the traditions and live upto the moral brigade.

So, Ekta Kapoor, the mascot of duty and self-sacrifice gave us Dirty Picture a semi biopic based on the life of Silk Smitha who was partly driven by circumstances and partly by her own burning desire to reach and conquer the glamour world, has no qualms from using and manipulating her loud sexuality as a means to make ends meet…and successfully rewrites the rules of showbiz but in the end lives a life of confinement and loneliness and ultimately dissolves into the trappings of self-pity and kills herself not being able to cope with the woes of love being lost.

Well, it’s not that Bollywood never had so called strong female characters but they generally came with their own existing limitations – they were too bold to fit into the general acceptable conventions and were rebels who would meet a sad end – either killed by the villain or rejected by the heroes, as in the case of Bindu and Aruna Irani.

But even as today’s heroines insist on doing their own item numbers, and displaying the attributes of a self-proclaimed vixen, but yes, in the end with many sharp twists and turns they meet a similar end and that is of agony.

Maybe the leaders of this new found cultural freedom should promote more realistic, acceptable and inspiring portrayals of women – a modern woman who is confident and aware of herself by all means, and is aggressive, hardworking, family oriented at the same time and manages to do a balancing act in all ways possible and there is an air of celebration about it. Okay, don’t assume we are discussing the characteristics of a supernatural woman!