Where Are The Pink Chaddis?

With a spate in crime against women and victim blaming, is it time to resume the Pink Chaddi campaign? 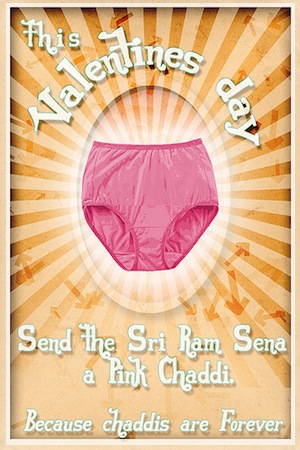 I can see that now there is an epidemic of criminal assaults on women in the name of Indian ‘culture’ or just for the ‘fun’ of it. There also is an equally viral epidemic of blame-the-victim disease.

In case we forget what our culture is all about, actor and local MLA Chiranjeet Chatterjee blamed “skirt size” for incidents of sexual harassment. He was reacting to the sexual assault on a girl in Barasat, West Bengal. He said, “Women are to blame for this to some extent. Their skirt size and dress are changing. Why? Must be for the entertainment of men, to earn their appreciation. People call it ‘teasing’ when someone uses a bad word instead of appreciating.”

He joins leading lights such as Pramod Muthalik, whose goons of the Sri Ram Sene had assaulted girls in a pub in Mangalore in early 2009. Muthalik had praised the incident, saying, “Whoever has done this has done a good job. Girls going to pubs is not acceptable. So, whatever the Sena members did was right.” Muthalik did get what he deserved. In 2010, when he was busy warning couples ahead of Valentine’s Day on a televised show, a man ran towards him with an ink bottle and threw it in his face. (See video).

A more inspiring reaction to Muthalik and his goons was the Pink Chaddi Campaign organized by the Consortium of Pub-going, Loose, and Forward Women. One of the group’s founder-members, Nisha Susan had said, “The name of the group was tongue-in-cheek, but their cause wasn’t. They wanted to stand up for women’s rights…Our fundamental rights are not to be taken away, like gifts with strings.”

The campaign went viral on the Internet, but the campaign’s Facebook account was hacked repeatedly and for some reason, Facebook suspended the account later. Pramod Muthalik was sent over two thousand pink chaddis (underwear). He had the cheek to call the act of sending pink chaddis to him a “perverted act”!

I wonder how I can contact Nisha Susan and her friends. I, along with my friends will donate pink chaddis specially designed to be wrapped around those mouths that spew venom in the name of culture. If women wear short skirts to entertain men- as some seem to think- what stops me from entertaining myself by flooding certain kinds of insensitive people- men and women both, with pink chaddis?