The Modern Indian Girl Is Choosy

The modern Indian girl 'of marriageable age' is accused of being "choosy" showing that girls in India are still seen as community property, not individuals 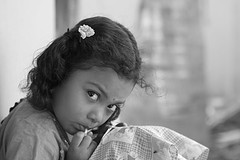 Those of us living in ‘modern’, urban areas like Mumbai, Delhi, Chennai or Bangalore sometimes have a tendency to gasp in horror at those uneducated, uncivilized masses living in places like the villages of Haryana and Punjab. How they treat their women, like cattle belonging to the family – mute sheep to be given away in the garb of marriage, to ‘suitable’ people chosen by the family or even killed for daring to defy marriage norms! Surely such things don’t happen in urban India, or at least not among ‘people like us’! Women here have choice, don’t they?

Well, my eyes were opened today when I happened to land upon a community portal (which I am not going to link to, they don’t need the publicity) – infact, a portal for the highly educated and upper-caste community I belong to. It may be true that women in urban India or at least the more educated parts of it have more choice – but this has been due to women fighting hard for those choices. No one gave it to them on a platter, and even now, many grudge them for it. So, the hot topic of discussion that I happened to land upon was “matrimonial websites” and the discussion had basically come down to the fact that ‘modern girls’ were being too ‘choosy’ and ‘boys’ of the community were finding it difficult to get married. (Note, I shall continue using ‘girls’ and ‘boys’ as the terminology not because I think grown men and women need to be called that, but because this was the parlance on the portal and indeed is, in most arranged marriage related transactions).

A sample of the key accusations levelled at these girls were:

– Girls want the boy to be very highly qualified and earning a lot of money. In fact, boys earning below Rs.60,000 a month have little chance!

– Girls refuse to relocate if the boy is in a different city. They are already employed and will only look at boys in the same city. What will happen to boys in government or banks where there are frequent transfers if girls refuse to marry them?

– Girls reject boys whose parents live with them, or even in the same city

The common thread running through many of these posts was a sense of incredulity that girls should have any strong opinions or requirements of their own. This is not say that every criteria an individual has will necessarily make them happy; after all, marrying a person of a particular height or even income may not lead to compatibility. But that wasn’t the contention of these ‘elders’.

In other words, girls of 24 and older could not possibly make choices of their own, and it is not even considered desirable that they do. Members of this community don’t (in general) kill their daughters for marrying outside the community, but all the same, would you not say that girls are still considered the property of their families and communities? Regardless of the educational and employment qualifications, their primary value still lies in their wombs – as begetters of children for the community of the future, not as individuals with likes and dislikes of their own.

It may also interest you to know that some of the same ‘elders’ felt it was ‘ok’ (though still not a great option) if boys of the community chose girls from outside – since those girls could be ‘trained’ to take on the habits and traditions of women in the community and pass on the same to children.