Will educating the girl child pave the road for women's empowerment in India? Can literacy improve the lives of poor Indian women? 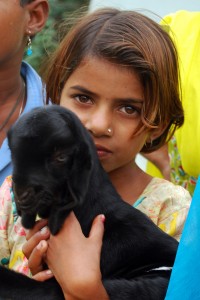 Guest blogger Natasha, in her own words: Many terms describe the forty-something Natasha – former investment banker, marathoner, wool-worker, window-sill gardener, people watcher. But only one defines – mother of two.

When a friend posted the Nike “Girl Effect” video on Facebook, one of his friends commented – “I challenge you to prove to me that staying in school = job, … and that by being educated she isn’t also ostracized from the social network that can help her survive if she isn’t excessively exploited…….Yes, I know “stop prostitution, build schools” is more compelling, but I’m unconvinced …[education]….is a solution.”

Had it been one of my own friends, I would probably have taken her down in a tackle and punched her on the nose a couple of times, but this was a friend of a friend, and I didn’t want to engage in a fight on someone else’s wall. And I am glad I stopped to take a breath before reacting, because when I thought about it, I realized she was right.

As a proponent of educating girls and women, the last thing I want is for someone to question the effectiveness of education in solving a social problem that has existed for generations, but when you really think about it, the lady was right.

Though it pains me to say so, educating girls and women is not ‘The Solution’.

Girls’ Education is NOT a magic pill that you can force down the throat of an unwilling society, and expect it to cure centuries of oppression and neglect.

Let us for a moment forget the female foetuses that are killed in the womb, the female babies that are abandoned soon after birth, and the girls that are allowed to die due to malnutrition and neglect. Let us think only of the girls who are lucky enough to be allowed to reach their fifth birthdays.

Let us think about Arthi who is grudgingly allowed to go to the local government school, provided she milks the goats first thing in the morning, and fetches water from a well 2 miles away after she gets back home from school. While her male classmates are playing cricket, she’s busy helping her mother cook dinner, and long after everyone retires for the night, she tries to finish her homework in the light of a flickering lamp. Arthi still manages to keep up with her studies, but the day her mother falls ill after delivering a male child, she will be expected to drop out of school and mind her baby brother. She is seven, but she knows that her life is all but over. No more dreaming of becoming a doctor and serving humanity.
She knows that she will be kept at home to mind a succession of younger siblings, and be married off to a much older man soon after she attains puberty.

She might remember her dreams, and try to ensure her daughters get an education, but dreams are not always something you can afford when you are trying desperately to keep a family together on a meagre income. Building a school would not have made any difference to Arthi’s life, because her family believes they are better off using her as a full-time unpaid help.

Let us think about Urmila who managed to stay in school long enough to graduate. The nearest college was in a city 100 miles away, and her parents would not allow her to leave home for fear of the stigma that would attach itself to a girl who lived “alone in an alien city”. Her high school graduation certificate is of no use in helping her get a job in her village, and she is eventually left with no choice but to allow her family to marry her off to the first man who will have her.

Her husband grudges her the independence of thought that an education has given her, and works hard to stamp out her spirit. To survive, she’s learnt to curb her tongue and accede to whatever is demanded of her. She does her best to encourage other girls to study and dream big, and has made up her mind that when the time comes, she will move to the city herself so her daughter can go to college.

But a high school education did not leave Urmila any better off than she would have been if she had dropped out of school after primary school.

Let us think about Sukriti who studied and became a teacher in the local village school. She earns more than any of her brothers, but is expected to hand over her entire earnings to her father. Few men are willing to even consider marrying her, and her father deters the few that are because he doesn’t want to give up on a reliable source of money. She has no say in any of the decisions that the family makes, she is excluded from social activities because of her unmarried status, and though she loves teaching young girls, she wonders if this is the life she expected when she fought society to be allowed to realize her dreams.

Sukriti is educated and has a good job, but financial earnings have not translated into social or economic independence for her.

In a country like India, the status of women is linked to poverty and to the rural-urban divide.

Building schools has not made too much of a difference to Arthi, Urmila or Sukriti. Clearly education is NOT a magic pill. It is not a magic-pill, because the problem is not a simple one. In a country like India, the status of women is linked to poverty and to the rural-urban divide. It is the product of generations of oppression in the household, and centuries of being denied their rightful place in society.

When the problem is as deep rooted in tradition and poverty as the condition of women in some parts of the world, the solution cannot be a simple one. Society needs to accept women as useful citizens and not merely as breeding machines; families need to move from a patriarchal mode to a more equitable one; communities need to train themselves to hear the voice of women. None of that can happen in a day, a month, a decade or even a generation.

Change has to be gradual. Change has to start somewhere. And Education is as good a place to start as any other. Girls who go to school learn to look beyond the constraints a patriarchal society has placed on them. They look at a future beyond the traditional “female” occupations which ultimately boil down to pleasing men in some way, and start thinking for themselves.

And that is definitely the first step towards a change which may well take more than one generation to manifest itself in.

Education of girls and women is not a magic pill, but it is the logical place to start. And we owe it to Her to start.