Motherhood, Through A Father’s Eyes

When a parent with young children is gravely ill, what thoughts run through their mind in those last days? 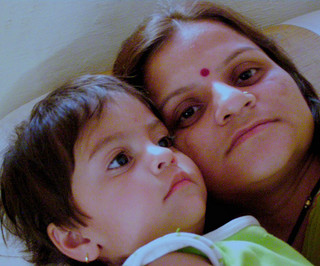 It was late 1999, and my brother’s wife was in the last stages of cancer of the bone- Ewing’s Sarcoma. Doctors had given her five years to live, and it was nearing the end of those five years. She was 29, and we had been watching her wither away day by day, minute by minute. The one memory I have is that she never complained, even though the intense pain that she suffered was there for all to see- her face would contort with pain, she could barely speak, and yet she would ensure that she fed every meal to her daughter (a little baby then) herself.

In fact the last image I have of her is of her feeding the child with a spoon, while I could literally see life ebbing out of her body, a shadow of death in her eyes. She died soon after in her sleep- days before her 29th birthday. This image that I have is of bravery, of fortitude, and of the will to live till the last breath, with thoughts only of her baby daughter on her mind. It was in those days that my wife began to complain of mild fever every evening, along with difficulty in breathing. An x-ray of the chest showed a white spot in the region over the heart. I recall that moment when the doctor said he wanted to speak to me alone, and his words still ring in my ears- “Sir, I do not want to scare you but I suspect lymphoma (a cancer of the lymph nodes), and I think it should be further investigated without delay.” To say that I was devastated is to put it mildly. I was speechless, and in a daze, and I had to tell my wife. Again, like my brother’s wife, she took it with courage. “Look after our daughters,” she told me, an all I could tell her was that we should first get the other tests done, and that everything will be alright.

Further tests were conducted, and nothing would rule out lymphoma, and each passing day she would tell me to look after our daughters. The last thing to be done was an FNAC (Fine Needle Aspiration Cytology), which was cancelled at the last moment because the doctors felt it would be a big risk as the lymph nodes were right over her pulmonary artery. That left a full fledged thoracotomy (a major surgery of the chest to access the thoracic organs) to take out the suspected tissues for culture, which was conducted on Christmas Day, 1999. God in his mercy was kind, and it turned out to be a tuberculosis infection. In all those days my wife did not shed a single tear, she only worried about our daughters, and me.

Now let me move to 2005, when a persistent fever I had turned near fatal. It was acute typhoid, with concurrent hepatitis and vasculitis- an inflammatory destruction of blood vessels. By the time I was hospitalized, I was in a near-coma and in delirium, and I could barely see- the blood vessels in my eyes were inflamed and self-destructing. The doctor, a friend of mine, was candid enough- he told me that if I could survive five days, I would be out of danger; if not; there was nothing much he could do.

My wife and daughters would come to see me every evening, but I could only see them through a haze because of the problem in my eyes; I could not move towards them because of all those tubes and wires going in and out of my body; I could not reach out to them with my arms because my wrists were swollen and painful with all those doses of IV fluids; I could not talk to them because I was delirious. I spent nearly three weeks in hospital, barely seeing and barely talking, and with no sense of time or place, but I know that throughout the nightmare my mind and my heart were constantly telling my wife, ‘Take care of yourself and our daughters if I am gone.’