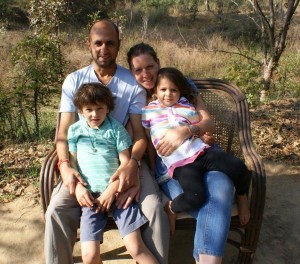 The Call Of The Wild: Katie Bhujwala Of Shergarh

Katie Bhujwala, who runs the Shergarh wildlife camp in Kanha, is among the small but growing number of women from Western countries who call India home.

While we usually interview women achievers from India in this section, when I met Katie Bhujwala at Shergarh, the wildlife resort that she runs with her husband Jehan, near Kanha National Park in Madhya Pradesh, I knew that her story was worth listening to. Running a wildlife camp is not the easiest of jobs, and adapting to life in a new country and raising a family there has its own set of challenges. Certainly, she falls into a category of women achievers we would love to know more about!

In this interview, Katie tells us about her unusual life choices, and how she has handled them.

Moving to a new and very different country, making it home, operating a wildlife camp in rural India – tell us a little about your unusual journey.

Katie Bhujwala: I came out to India 12 years ago to travel and find enriching work opportunities. I had just completed a psychology degree along with a short course in anthropology. A fantastic opportunity came up to volunteer at a renowned wildlife lodge in central India for six months.

Shortly after I reached, I met Jehan, a self-taught naturalist from Mumbai, who was living nearby in a charming mud hut on his own plot of land. He was regenerating indigenous forest there, and planning on setting up a tented camp. He took me on walks through the forest and would notice everything around him. We would find a place to sit quietly, close our eyes and see if we could work out what was making every different sound or call. It was magic.

Occasionally we would come across people collecting forest produce such as the intoxicating Mahua flower. In some ways it was no different to when, as children, we went out collecting blackberries from the country-lane hedgerows for a Sunday crumble! Yet, here I was in awe of the dependency and familiarity that these forest people shared with the cycles of nature and her seasonal gifts. It is a thought that continues to inspire me.

Did you always have an interest in nature, wildlife, the outdoors? How did this interest happen for you?

Katie Bhujwala: Although I had grown up in the English countryside, I had never taken a particular interest in wildlife and conservation; it was the opportunity of working alongside rural communities in a completely different culture that initially pulled me.

In our spare time, Jehan and I would sit on my back verandah, drawing and talking through the plans for his lodge. On my travels through India, I had witnessed the ugly face of unregulated development as well as wonderful gems that integrated harmoniously within their community and environment. I felt very strongly about incorporating responsible practices in Jehan’s project.

It was hard to admit at the time that I was drafting myself into this, and I certainly hadn’t envisaged that a year later I would marry Jehan, and that we would bring two beautiful children into ‘the plan’! 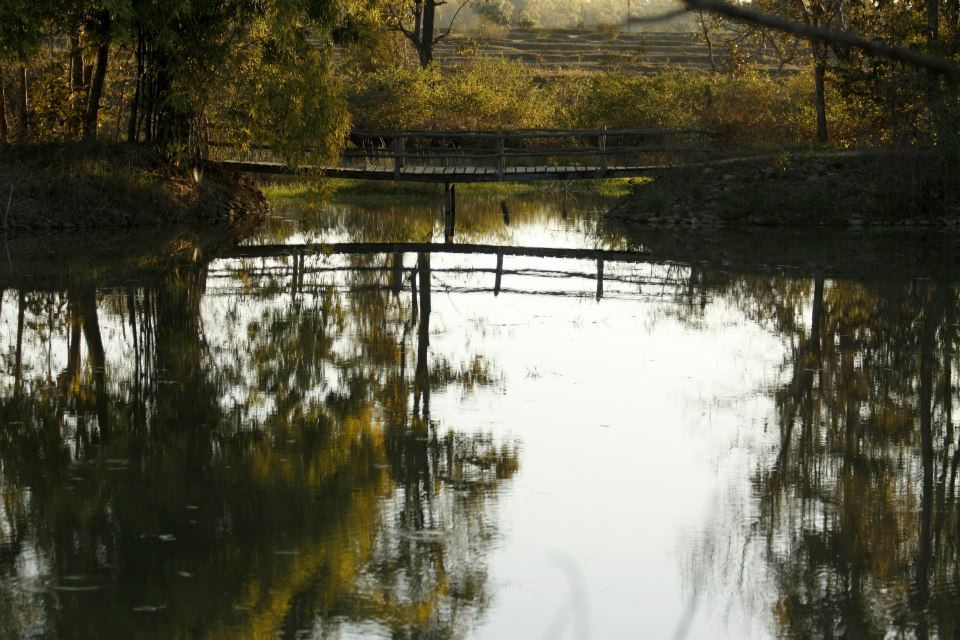 As a woman in an inter-cultural relationship, what’s been the toughest bit for you? What’s it like raising children in a culture different from the one you were brought up in?

Katie Bhujwala: Raising children has been the most challenging and exhilarating life experience. I am sure it is for any mother. Jehan and I had very nurturing childhoods, with similar family values that we hope to instill within Kai and Ella as they grow up in a completely different environment!

In an inter-cultural relationship, you view each other’s culture and traditions from a different perspective, which in turn allows you to view your own culture in a way that you may not have otherwise seen. It can be really tough to compromise and let-go of what is essentially ‘baggage’, and when you see your children confident, happy and rooted, you know it’s all going okay!

The natural and simple environment that surrounds us in Kanha, has shaped our way of life more than anything else. I have become infected by Kai’s love of insects and reptiles, which he catches with skill and gentile, observes, photographs, draws and then releases. Ella eases effortlessly through the mud-finished courtyards of the village homes, cuddling baby goats, pigs and chicks, chasing out cows with a stick, picking guavas, ber and lantana berries, and chit-chatting with her friends in the tribal dialect. They are both so at home in Kanha. It is what they know best.

Ever since Kai was born 9 years ago, we have explored numerous options for their schooling. We decided to take on their education ourselves; Jehan mostly teaches Maths, while I concentrate on reading and writing. Then they go over to the village school for Hindi lessons, and to play with their friends. Having a direct involvement in their education has been very satisfying, for a start you learn a lot yourself! It has also allowed us to question the pros and cons of traditional education, and develop quite a respect for teachers that are willing to take on a whole classroom!

Wildlife resorts in India have been accused of obstructing vital corridors for animal movement and using up more than their fair share of resources. What are your thoughts on this?

Katie Bhujwala: If we want to instill within our population an appreciation of our natural heritage, then tourism HAS to exist in places like Kanha. It is only through experiential learning that people will develop the right attitude towards protecting their environment. When the Supreme Court ordered a ban on tourism in all of India’s tiger reserves from June-Oct last year, it exposed the scarily dreary outlook possessed by some of those in power. Tourism was cleverly used as a scapegoat.

That is not to say that tourism does not have a huge responsibility and role to play in conservation, if only the NTCA (National Tiger Conservation Agency) would have the dynamism to give it its full value. There are plenty of irresponsible lodges that have been constructed, but it is the Government’s responsibility to regulate this and ensure that there is a set of strict enforced codes that determine what can be constructed and where, who is employed and what exactly is going on inside those lodges.

An initiative called TOFT has united lodges and tour operators under one umbrella to actively encourage and promote good tourism practices, and offer us all a set of clear guidelines. This has been set up independently by individuals from the tourism industry, and is really doing a job that the Government should be doing.

Specifically for women of the local communities, has the presence of tourism made a difference?

Katie Bhujwala: The one thing I love about the tribal communities around Kanha is their respect towards women. While it is a patriarchal system, (where the woman’s family is expected to offer a dowry to the husband’s family, and women leave their homes on marriage) the women of Kanha, as a generalisation, are strong, confident, happy and keep their husbands in check! They have liberated ideas within the limits of a locality they have rarely left. Also, they do not show a particular preference over the ‘boy-child’ which is prevalent in many parts of the country.

Lodges are increasingly employing women; we have 6 out of our 16 member team. Two years ago the Forest Department set up a quota for women to enter the guiding system, which was a brilliant move by them. However, it is in the area of women’s health that I feel women need better support.

What next for you and for Shergarh?

Katie Bhujwala: We always intended for Shergarh to be a small camp. We started with six tents, and we still have just six. It is a perfect number; we are able to spend time with everybody who stays with us, and we feel they are able to leave with a true sense of the whole area, not just the reserve. The surrounding countryside is fabulous to explore, and we take guests cycling in the region, including on trips with overnight camp-outs. We also recently set up a bespoke temporary camp for a group who are working closely with weavers from very remote villages in Madhya Pradesh. Back at camp, our main aim is to keep nourishing the land back into a beautiful forest, and as each year passes to make it feel that bit more special.

Jehan is by heart an entrepreneur and I also love a good project! So, at the moment we are also restoring his ancestral home in Bhuj, (the capital of the Kutch district in Gujarat) with the view of opening 4-5 guest rooms. Kutch is a fascinating destination, and for many centuries was geographically cut off from the rest of India, giving it a unique cultural identity. It is also an excellent destination for avid wildlife seekers and textile shoppers. We hope to have the house ready by Feb 2014.