Warrior In A Pink Sari: A Sampat Pal Biography

Warrior In A Pink Sari is an autobiographical account of Sampat Pal, the feisty leader of Uttar Pradesh’s Gulabi Gang. 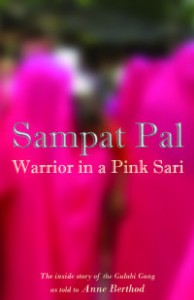 Warrior In A Pink Sari is an autobiographical account of Sampat Pal, the feisty leader of Uttar Pradesh’s Gulabi Gang.

Millions of women in rural India are born into a life of inequality. They are discriminated against by their families and society; not given a right to education, expected to take care of siblings hardly any younger than themselves while their brothers attend school; married off at a tender age without any understanding of what marriage really means, abused by in-laws when they dare to stand up to them, they are stuck in a vicious cycle of multiple pregnancies, poor health, and ignorance.

Sampat Pal began her life just like the millions of rural women of India. So what changed the trajectory of her life?

Warrior In A Pink Sari is a powerful first person narrative that gives us the answers to this puzzle. Told by Sampat Pal herself to Anne Berthod, a French journalist, it was first published as Moi, Sampat Pal: Chef De Gang En Sari Rose, in French. This translation has an introduction by Shweta Vachani, the translator, who had also accompanied Sampat Pal to a conference in Stockholm. Ms Vachani’s observations of the crusader as, “Formidable and charming at the same time” and that, “She doesn’t have a ‘right-hand person’ because she doesn’t ‘trust anyone’ despite being the ‘Gulabi Gang leader’” has one turning the pages to the actual narrative to find out more.

Sampat Pal had been a feisty child, often getting into fist-fights with her peers over any kind of injustice. Married at 12, she was a mother at 15, and dealing with being a daughter-in-law in a discriminatory society. This did not stop her from rebelling against injustice, even against her own family. She was soon on the run with her two little girls and husband, when the corrupt officials and people supporting communal/ gender-related violence opposed by her set paid killers after her. Homeless, in a new place, she soon began her activities in a renewed effort.

Fighting injustice in the only way she knew – taking it by the horns – she was soon a household name in the Uttar Pradesh hinterland. People came to her from far and wide: victims of bureaucratic red tape and corruption, victims of domestic violence, victims of caste and communal discrimination, victims of police action or inaction – they all came to her for redressal. She would do this in her rustic, down-to-earth way, with reason, and if that failed, by using violent means.

She narrates how the handful of women who stood with her soon became a following, and morphed into what is known as the Gulabi Gang – in their uniform of distinctive pink saris. Sampat Pal’s acerbic, tough and earthy way of dealing with things gets her results, as she speaks the same language, literally and figuratively, as the perpetrators of injustice, paying them in the same coin.

Political recognition was not far away, although Sampat Pal has had a blow-hot, blow-cold relationship with politics; first with the BSP and then with the Congress. One also feels that she has begun to believe in her own mythology. There is a sense of megalomania that comes across in the way she narrates her story – the feeling that she could do no wrong; a feeling that could be her Achilles’ heel in the long run.

Sampat Pal’s brand of feminism has all the right ingredients; the right of women to an education, of the right to their bodies, of the right to a choice in who and when they marry, of a right to property, of the right to a good and productive life and the recognition of how the discrimination based on gender and caste puts Dalit women last in the pecking order. There is much good the Gulabi Gang can do, if only they keep their vision from sullying.

The book could have done with some tighter editing in parts, where it rambles and becomes a little repetitive. All in all, a good read.

If you’re planning to purchase Warrior In A Pink Sari do consider buying it through this Women’s Web affiliate link at Flipkart. We get a small share of the proceeds – every little bit will help us continue bringing you the content you like!