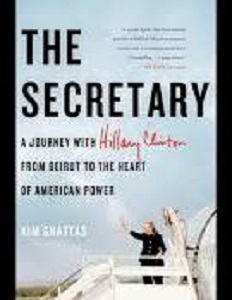 Kim Gattas’ The Secretary gives us an interesting insight into Hillary Clinton’s tenure as the US Secretary of State.

Hillary Rodham Clinton – a charismatic, intelligent and accomplished woman who has doffed various hats during her life. In 2008, when the US was ready to overthrow the Republican Bush government that had given it the war in the Middle East, Hillary lost the vote as the Democratic Party’s candidate for the post of President to Barack Obama.

However, Obama recognized the power of Hillary Clinton’s unique position and experience, choosing to align her alongside, offering her the post of Secretary of State – the President’s representative around the globe. It was a shrewd move, as Hillary proved to be a well-informed, driven and loyal ally, who took on the challenge of restoring America’s diplomatic relations with touchy states and its reputation as a world power.

Kim Ghattas is a child of war-torn Beirut, where politics was a daily staple of discussion; where  people stood afar watching American motorcades, and cursing the inconvenience caused in their already fractured lives. As an outsider coming from one of those ‘problem nations’, she also has an insight into the expectations of global populations, as most nations think the US can solve their problems just by willing it, “as if by waving a magic wand”.

Now, as an insider in Clinton’s ‘Bubble’ (the name given by a bunch of journalists to the plane that the Secretary of State travelled in),  a BBC correspondent who travelled everywhere with the group of journalists accompanying Clinton on all her overseas visits, Ghattas’ vantage point both as this ‘outsider’ and a woman, throws up an interesting perspective of Clinton’s years as Secretary of State, the most visible cog other than the President himself in the Obama administration.

The Secretary is a story of two journeys. One – the journey of Hillary Clinton as the US Secretary of State, which is one roller coaster ride. One in which there were daily challenges, that the lady met head on, in her inimitable style, that won her and consequently the US much cheer and goodwill around the world. Second – the journey that the writer makes from her war-torn childhood to an understanding of the working of the world’s superpower, and the making of peace with her roots.

It, however, does not have much for the reader who wants to find out about a woman Secretary of State’s policies and actions on women’s issues. India too, is missing from the book, except in relation to the problems of Pakistan or China. Like naughty children monopolizing a mother’s attention, the focus is more on the countries that have traditionally been viewed by the US as troublemakers – China, North Korea, Egypt and the Middle East right up to Pakistan.

It is a book both for the interested lay reader wanting to find out more, as well as the politics aficionado who gets a more comprehensive view of an interesting and turbulent period. We realize what the author understands towards the end of the 4-year period, from 2009 to 2013, that there is no plan. The Americans are trying to figure this out day by day and manage it as best they can. Kim Ghattas’ book is representative of that; most of it is about the damage control, and misses out on delivering what it could do: speak more to women readers wanting to find out what the world’s most powerful and influential woman in politics had to say about their issues. These are, after all, not merely women’s issues in today’s world, but humanitarian issues that affect everyone.

If you’re planning to purchase Kim Gattas’ The Secretary do consider buying it through this Women’s Web affiliate link at Flipkart. We get a small share of the proceeds – every little bit will help us continue bringing you the content you like!

Readers outside India can purchase The Secretary through our affiliate link at Amazon.