The House With A Thousand Stories

Aruni Kashyap’s The House With A Thousand Stories tells a moving story of a family living with the constant threat of violence in Assam. 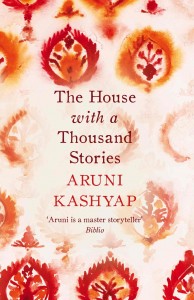 Aruni Kashyap’s The House With A Thousand Stories tells a moving story of a family living with the constant threat of violence in Assam.

To me, fiction set in Assam carries an extra and unfair layer of expectations and anticipation. On one hand, I’m eager to feel at one with the story; to experience again, through the words, the land I grew up in. Reading of familiar sights and sounds and smells is itself an experience worth savouring. On the other hand, I expect too much: my memories rekindled, my soul elevated, my yearning intensified.

The House With A Thousand Stories is a haunting and poignant story. It is perhaps inevitable that stories set in Assam should be sad; in a land shadowed by violence for decades, even happiness seems overhung with tragedy. Tragedy and the threat of violence loom heavy over this novel… too heavy, perhaps. The mood never lightens, the characters never seem at peace, always tensing themselves in readiness for the next blow.

The narrator is a young teenage boy: a very “normal” boy, preferring to visit his cousin than study for his exams, having a faint disdain for the grown-ups, and full of lust for the nearest available young woman. It is this very normalness that highlights everything that’s different and difficult: Pablo the narrator is also the outsider, a guest in the house of his relatives (as various characters keep pointing out), a privileged young man who lives in relatively peaceful Guwahati and has his escape route mapped out (he is to go to Delhi, as so many young people from Guwahati do).

However, the house he is visiting in the village, the house where most of the novel is set, houses helplessness and sorrow; unhappy love stories (three of them – one in each generation), a sick grandmother and a young bride who seems to be hurtling towards a choice of tragedies. Add to that the always present threat of violence from both the ULFA and the army (the latter being that much more fearful) as well as the rigid mores of a ruthlessly parochial society, and it is no wonder that none of the residents of the house seem to be able to find happiness.

What marred my enjoyment (not quite the right word: absorption, maybe?) of the book were faults tighter editing could have fixed. The narrative moves back and forth in time until I kept losing thread of the sequence of events; the gimmick could have been more effective sparingly used, making it less difficult for the reader to keep up. There are a lot of characters, and they are rarely introduced when they first appear, so that I had trouble keeping straight who was who. Some turns of phrase are reused until they are worn; I got tired of the simile after about the eighth comparison of a woman’s breasts to some fruit (breasts seemingly the first thing Pablo notices about any woman, young or old).

That brings us to the other source of annoyance to me (though it’s not a flaw of the book): the narrator, Pablo, is a typical teenage boy, self-indulgent and annoyingly self-absorbed; focusing on his own second-hand pain when it’s always someone else who is dealing with the actual blow of fate. This makes for consistent characterization, but sometimes, you wish you knew more about a particular character than the tragedy she was a victim of: what did she think, feel? Unfortunately, the narrative follows Pablo when he conveniently walks away to nurse his own feelings.

Yet these grievances seem minor when compared to the power of the story. For the days I was reading it, it was on my mind, it affected my mood, and each time I picked up the book it was with some trepidation as I anticipated more pain and sorrow. That’s a testament to Kashyap’s pen.

If you’re planning to purchase Aruni Kashyap’s The House With A Thousand Stories do consider buying it through this Women’s Web affiliate link at Flipkart. We get a small share of the proceeds – every little bit will help us continue bringing you the content you like!

Readers outside India can purchase The House With A Thousand Stories through our affiliate link at Amazon.