She Writes, an anthology of twelve stories by women writers in India, is marred by uneven writing, but has to its credit some unusual storylines. 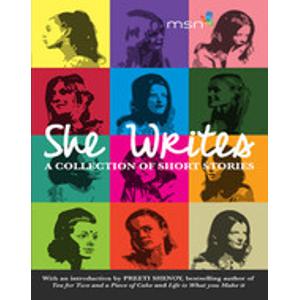 She Writes, an anthology of twelve stories by women writers in India, is marred by uneven writing, but has to its credit some unusual storylines.

She Writes, a collection of short stories by twelve women, is an anthology that has come about as the result of a short story writing contest organized by publishers Random House with the MSN website in 2012.

The contest is described as having been conducted to “hunt for twelve of India’s finest women writers.” While She Writes does not quite live up to that objective, it does bring us some unusual stories, many of them revolving around the lives of women in India.

The first story in the collection, Anisha Bhaduri’s Other People’s Lives, sets the tone for the rest, with almost all of them being narrated by an omniscient narrator peering into other people’s lives. This story is interesting for the way it sets up the reader to expect a Jhumpa Lahiri style narrative, but neatly reverses it to give us not the immigrant’s perspective, but that of the ones who ‘could not get away’.

One of the biggest challenges of any anthology editor must be to ensure that the stories are evenly matched in terms of the writing quality, and when you have to work with the entries that have come in through a contest, perhaps the editor has a tougher task at hand. This is evident in She Writes, which has some very insightful work interspersed with some jerky writing and banal storylines that allows the reader no suspension of disbelief.

Take for instance Amrita Saikia’s A Tale Of Destiny. A beautiful heroine from a small town, academically oriented, career focused, morphs into the married woman dressing up and waiting for the husband to come home, with nothing to tell us how this transformation came about. What is worse, the dreamboat husband, one Alok Dasgupta, has deep blue eyes. Surely the writer could not expect us to believe in an Indian man with those eyes? A small point, but this stock character effectively removed any interest I had in the already hyper-dramatic narrative.

Luckily, some of the stories have been crafted with more affection for the characters. The best ones, like Chitralekha’s Conundrum and Sheela Jaywant’s Yokemates take us into lives that seem rather ordinary on the surface, and yet reveal the ripples underneath. A friendship between two elderly chawl-dwelling Maharashtrian ladies sets the reader up to expect a ‘homely’ narrative, and then chips away at it very cleverly to give us something unexpected. Interestingly, the characters in these are not your typical urban, middle class protagonists.

Some writers, while using the omniscient narrator, have still tried to experiment with style, as Aprameya Manthena does, attempting magic realism in her Revelations. The attempt is not entirely successful, but makes for some variation in the anthology.

While far from the best short story writing one could find in India, She Writes makes for some interesting reading – especially for those tired of the teenage angst and chic-lit being churned out in the name of popular literature in India.

If you’re planning to purchase She Writes do consider buying it through this Women’s Web affiliate link at Flipkart. We get a small share of the proceeds – every little bit will help us continue bringing you the content you like!