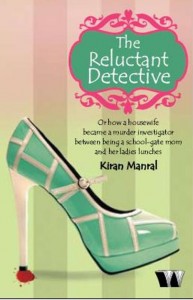 Don’t go into Kiran Manral’s The Reluctant Detective expecting a detective story on the lines of Sherlock Holmes or Miss Marple. The two murders in the first couple of chapters are almost incidental to the story, narrated by and starring a bored suburban housewife, Kay Mehra, who, driven partly by boredom, partly by curiosity, and partly out of her wish to see justice done, looks into the murders she encounters.

If you go in expecting the story of a somewhat bored, somewhat flurried housewife with what appears to be low self-esteem, a marriage which has long since lost any vestige of romance or meaningful communication and an exhausting and often repulsive five-year-old… that’s exactly what you get.

The narrator-protagonist’s self-deprecatory snarky humour and tendency to ramble are both the best and worst parts of the books. Some of these passages are genuinely funny, but some seem way too long and unnecessary and not funny enough. It’s hard to know where the narrator ends and the writer begins, and you begin to realize it’s Kay the narrator, and not Kiran the writer, who’s day-dreaming before she gets called back to the present moment.

The book could have been much better with more careful editing. There are typos (“joggers track”) and other errors (“lawfully betrothed” used as a synonym for “spouse”), full stops used instead of question marks, and long run-on sentences that make it difficult to hold on to the meaning.

Overall, though, it’s a nice light read, and while I was torn between disappointment at the extremely predictable denouement to the murder “mystery” and relieved at the lack of absurd melodrama, I know the book is probably better for not indulging my fantasies of a real suburban-housewife detective, instead sticking to the reluctant detective of the title.

If you’re planning to purchase Kiran Manral’s The Reluctant Detective do consider buying it through this Women’s Web affiliate link at Flipkart. We get a small share of the proceeds – every little bit will help us continue bringing you the content you like!

Readers outside India can purchase The Reluctant Detective