Meet Kalamandalam Bindhulekha, the mural painter who paints on temple walls – a profession that few women, if any, are involved in. 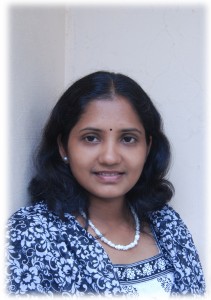 Meet Kalamandalam Bindhulekha, the mural painter from Kerala who paints on temple walls – a profession that few women, if any, are involved in.

Kalamandalam Bindhulekha is a talented, self-assured young woman fast gaining acclaim for her work in a traditional male bastion – the temple art of mural painting in Kerala. Belying her matter-of-fact manner, she expresses herself through the use of vivid hues in her paintings. Elemental reds, blues and yellows reveal the rich landscape of her mind.

Here, she talks about following her dreams, creating her own opportunities and powering through life with self-confidence.

Amrita Rajan (AR): When did you start painting murals?

Kalamandalam Bindhulekha (KB): My guru is my brother-in-law, Sadanandan, so I studied at home in the Gurukulam style. He began practicing when I was 13 and that’s when it entered my consciousness. I learned the designs, style and patterns from him. But it was only after getting my diploma for dance (Mohiniyattam and Bharatnatyam) in 1998 that I seriously pursued the art of mural painting.

AR: So you didn’t always want to paint murals?

KB: Traditional mural painting in Kerala has a rich history but it wasn’t always as well-regarded or famous as it is today. Only a few artists even did it. One of the last of the greats was the late Mammiyoor Krishnankutty Asaan. He set up an institute under the aegis of the Guruvayoor Temple and invited 10 students to learn under him. This was the first formal academic style institute to teach mural painting as opposed to the usual apprenticeship method. My brother-in-law was one of these 10 and that’s when my interest awakened in the subject and I began learning from him. A few of Bindhulekha’s paintings

AR: How did you get your first commission?

KB: It wasn’t really a commission. By 2001, I was working towards an exhibition. But I really wanted to paint in a temple. Mural painting in Kerala is a temple art; if you learn a temple art, you obviously want to practice it in a temple. So my brother-in-law and I took my paintings and went to talk to the trustees at Tiroor Vadakurumbakaavu Kshetram. And one of them agreed at his own risk and made it all possible for me. It was an act of devotion that I offered as a prayer. Money was not involved at all.

AR: And what was your subject?

AR: And it changed your life.

KB: It was the greatest school I’ve ever attended. Painting directly on to a wall is very different from theory or painting on canvas or paper. You need to judge everything by eye and be careful as to the ratios of your color. There are lots of little secrets that are only revealed as you work on a wall. There was no time restriction, so I could take my time and learn as I worked.

AR: You mentioned it took you two years to finish?

KB: The head priest of the temple was a very old man and he was a little doubtful about letting me work. He’d tell me, “You’ll get scared if you work by yourself, you can’t work when the temple is closed to the public.” But then if he didn’t like the person accompanying me, he’d send us away. So I could only work from 6.30 to 10 in the morning, 4 to 6 in the evening. By the time I finished mixing the colours, prepped the wall and started work, it was time to leave. So it took me 2 years to finish.

AR: Is it true you were the first woman to paint murals in a temple?

KB: I think I was the first woman to paint on the walls of a temple. I haven’t really done any great research on the subject but I haven’t heard of anyone before myself. When my brother-in-law was studying, he had no female peers.

I was only conscious of my gender when other people began talking about being a woman in this field. Some years ago, I worked with my brother-in-law on a fresco in a church and that was quite difficult – you have to work at a great height to reach the ceiling. So people used to come and gawk at this girl painting at a height of 24 ft. So that’s when I noticed. Other than that, I’m fully immersed in my work. I have a very strong work ethic so I concentrate fully on the job at hand, I always have.

AR: So people were mostly supportive?

KB: I’m very lucky; I’ve never encountered any negativity. At first, yes, some of the older people who came to pray at the temple were a little put off. They wondered why this girl was hanging around in the temple every day. They said you can’t go inside the sanctum, you can’t work while the temple is closed and there were lots of rules. But that’s about as negative as it got. My friends and family were always supportive.

AR: Tell me something about your work itself. Painting the mural in the temple was the first time you worked on a wall?

KB: Yes, you learn by painting watercolours on paper. It’s quite rare to get an opportunity to paint directly on a wall.

AR: But you also paint on canvas? You’ve had some very successful exhibitions of your work.

KB: I prefer to work on canvas from a longevity point of view. Also, it’s easier to store and move. It’s a lot more convenient to take care of your art when it’s on canvas rather than a wall.

Traditionally, in mural work, the subject is based on mythology and scripture. But my last exhibition was an attempt to do something more personal, something born of my own dreams and ideas. It was called Voyages of the Mind.

AR: Do you do a lot of private work now?

KB: I got a number of private commissions right after I finished work on the temple. But I wanted to paint what was in my mind and was apprehensive that commissioned work would interfere with that. So I chose to concentrate more on the art that I planned to exhibit. And I got my wish in 2007 in Bangalore where I had my first exhibition. And this year in August I did a show called Tradition and Beyond in Thrissur.

But I still do commissions off and on.

AR: Do you think of your chosen profession as a challenge?

I have a very positive attitude and self-confidence. For instance, I don’t speak English. In fact, I don’t speak any language except my mother tongue but I don’t let that stand in my way. I’ve been all over India and communicated through my work.

Amrita Rajan is a writer. She's interested in what you have to say. read more...