Chitra Banerjee Divakaruni's book Oleander Girl is a story of a young woman's search for her parentage and consequently her identity. 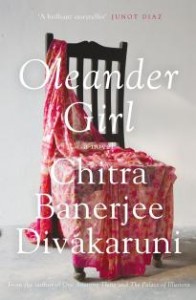 Chitra Banerjee Divakaruni’s book Oleander Girl is a story of a young woman’s search for her parentage and consequently her identity.

Oleander Girl starts on the morning of Korobi’s engagement to the man she loves, Rajat Bose. Korobi has been named by her mother after the oleander – beautiful but deadly. Having lost both her parents, she has been brought up by her grandparents – the gruff and strict Bimal Roy and the gentle, yet practical, Sarojini. Although Korobi is loved and cherished by her grandparents, she senses a secrecy in them, as though, an important truth is being hidden from her. The unexpected death of her grandfather and the silence of her grandmother, open up an unknown and uncertain past in Korobi’s life.

Korobi soon realizes that she cannot start a new life as Rajat’s wife, until she finds out who she really is. The answer, she discovers, lies across the oceans, in the United States, where her mother had spent a few years as a student.

We are hurtled along with Korobi in the quest for her identity. The search takes her far from her life as she knows it, across continents and beliefs, throwing her into intimate proximity with strangers, somehow getting her closer to her own self.

The book does not disappoint the reader as Korobi’s story unfolds, taking her to the United States in her quest. She skilfully peels off layer by layer, the thick swaddle of the years of lies and secrecy. We come to admire Korobi’s spirit as the book progresses, as she metamorphoses from the naive, protected and sensitive girl into a gutsy, passionate and independent woman to be reckoned with. A woman who embraces her inheritance, strengthened rather than diminished by who she really is. And yes, she does find out why she was named after the beautiful but deadly oleander.

Chitra Divakaruni Banerjee does it once again, giving us a strong female protagonist, and equally strong and well-etched characters. Their flaws only make them human and more believable. Notable, is the skilful juxtaposition of the marriage of the Roy elders, a patriarchal institution that stifles human needs and expression to the marriage of Rajat’s parents, which unabashedly projects a companionship that nurtures.

I was also struck by the portrait of Asif Ali, the Bose’s driver, who reminded me of the family driver of a dear friend. He knows them all as intimately as only a driver who is privy to personal conversations does. There are the communal problems in the background that he faces – the carnage at Godhra and the religious politics that follow, that are not just a backdrop but tie in significantly with Korobi’s quest.

An interesting book from one of India’s best known writers of fiction, Oleander Girl is worth a read.

If you’re planning to purchase Chitra Banerjee Divakaruni’s Oleander Girl do consider buying it through this Women’s Web affiliate link at Flipkart. We get a small share of the proceeds – every little bit will help us continue bringing you the content you like!

Readers outside India can purchase Oleander Girl through our affiliate link at Amazon.