Swedish author Jesper Bengtsson’s Aung San Suu Kyi: A Biography is a very readable account of the Iron Butterfly – and her country, Myanmar. 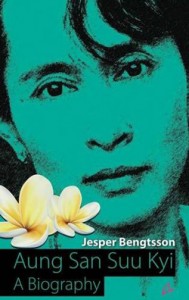 Swedish author Jesper Bengtsson’s Aung San Suu Kyi: A Biography is a very readable account of the Iron Butterfly – and her country, Myanmar.

With the recent elections in Myanmar attracting worldwide attention, the time is ripe for a biography of Aung San Suu Kyi, on whose shoulders rest so many expectations and hopes, both within and outside her country.

But, how does a biography look when its subject has been under house arrest for 15 of the last 21 years? When she has spoken very little of herself and that too in rare interviews permitted by the military junta?

That is the challenge Bengtsson faces and undaunted, he has attempted working around it by making this a broader story rather than that of just ‘The Lady’, as many in her country call her. This is the story of Myanmar (or Burma – its old name by which Bentsson insists on calling it throughout the book) in the 20th and early 21st centuries. While Suu Kyi has a starring role in it, this is not a biography dominated purely by its subject.

Bengtsson manages one interview with her, wrangled with much difficulty in the period after her last release in 2010. This brief meeting is of course hardly of any value as far as information is concerned, but it does serve to bolster the author in his conviction that her grace and charisma are not a product of party or media hype.

When the subject is a Nobel prize winner and one who has been invested with an almost saintly halo, it is easy to fall into the trap of hagiography. It is to Bengtsson’s credit that he does his best to view Suu Kyi objectively and does in fact talk to some of her detractors who accuse her of being arrogant, or stubborn – or even obsessive about her father.

What is perhaps lacking is real insight into how Suu Kyi the homemaker and academic decided to take the plunge and join Myanmar’s turbulent democracy movement. While some of her friends from college and from her days in the UK have been interviewed, it somehow doesn’t add up to a picture of the woman behind the famous woman. It probably didn’t help Bengtsson that the one person who knew her best, her husband Michael Aris, has been dead for more than ten years now.

Given the paucity of sources and previously published work, Bengtsson has done a fine job of bringing to us Aung San Suu Kyi – the illustrious heritage that shapes her, her early life and education, the ordinariness of her life as a young homemaker and the extraordinary leader – and symbol of resistance she eventually becomes.

This is a good book for anyone interested in a very crisp and readable account of the events that have led Myanmar to where it is today. For a more definitive account that captures the woman behind the symbol, we may need to wait a few years – when Myanmar is less tumultuous and Suu Kyi has the liberty and leisure to dwell on herself.

If you’re planning to purchase Aung San Suu Kyi: A Biography  do consider buying it through this Women’s Web affiliate link at Flipkart. We get a small share of the proceeds – every little bit will help us continue bringing you the content you like!

Readers outside India can purchase Aung San Suu Kyi: A Biography through our affiliate link at Amazon.