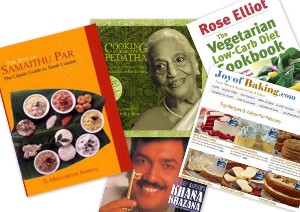 Good cookbooks are a treat to the senses as well as a lifeline at desperate times! A list of some great cookbooks for all seasons.

How many of you dread the, “What’s for dinner, Amma?”. I hate the, “Oh no! Not THAT again!” that usually follows my response. My son is perfectly happy to eat pasta every night of the week but feed him dosa for the third day in a row and he’ll go “AGAIN?” followed by a long moan. What are today’s children coming to, I ask. The womenfolk of my family made merry with an inexhaustible supply of idli/dosa batter and I ate dosas every day, thrice a day if I had to and liked it too! No wonder mums like me are hitting the (cook)books like every night is Board Exam night!

Despite the fact that my cookbooks occupy a whole shelf all by themselves in my bookshelf (I had to offload quite a bit when we moved to Chennai last summer), there are still a few that are my go-to books for any season. In-laws’ coming for lunch? High tea with school mums? Healthy fare to satisfy the brother? There are no issues these cooking gods cannot deal with. Which is why, these books form my top 5 favourite cookbooks.

At the top of the list, standing alone in her regal splendour, redolent in the knowledge that she has saved me and many a Tamilian cook half a dozen times every day, is the inimitable Meenakshi Ammal and her eponymous Samaithu Paar. This wonderful tome in 5 parts used to be a part of a new bride’s loot as she left the safe confines of her mum’s kitchen and ventured into the untested waters of her mother-in-law’s. Translated into English and most regional Indian languages, this book is a massive favourite and has a cult following in the southern states. Even if I had done a dish many times over, I still feel better making it with the battered copy of Samaithu Paar in my hands, gently guiding my way. Be it a simple rasam or a complicated rasavangi, Meenakshi Ammal will tell you what’s what.

When I was in college, my mum got me a copy of Sanjeev Kapoor’s, Khana Khazana and that was the start of a beautiful relationship. I love his simple explanations and no-fuss methodologies which mean one need not be a culinary institute graduate to be able to follow his instructions. I was a big fan of his TV show and he was the one who made me want to make rotis every night and introduced me to the gloriousness that is paneer. When I asked a bunch of friends who their favourite chef was, every second person said Sanjeev Kapoor.

A recent addition to my collection is Jigyasa Giri and Pratibha Jain’s, Cooking At Home with Pedatha. As the spouse is Telugu, I am always after learning an Andhra dish and bought this one after a few of my favourite food blogs praised it effusively. And boy! Were they not exaggerating or what? It was just like trying to make a dish with your granny standing behind you and telling you what to do, when. A novice to Andhra cooking, I had no problems following instructions and was most pleased with the results. So much so that my husband’s cousins asked me for the recipe! Now THAT’s what I call a compliment! The follow-up to this book, Sukham Ayu, their ayurvedic cookbook is also a massive hit at home.

One of the most famous vegetarian chefs in the western world, Rose Elliot has been my saviour since the days I decided to embrace healthy eating. Her The Vegetarian Low Carb Diet Cookbook is one of the most thumbed volumes and one that is the starting point for many a weekly dinner. Her ingenuity staggers me – who can come up with an asparagus quiche that is not a quiche in the everyday sense but is supremely yummy that even fussy 2.5 year olds fight for second helpings?

When the supremely awesome Stephanie Jaworski finally releases her cookbook, I’ll probably mow everyone else down to stand at the top of the queue but for now, like millions of her fans around the world, I lap up her words daily from her website, Joyofbaking.com. Every time a cake or a cookie or any baked goodie is on the menu, there’s none whose words I trust more than Stephanie’s tried and tested recipes. For someone with no grounding in baking, her detailed explanations go a long way in helping me know why I am doing what I do, which is rather important especially when it comes to baking. Recently, I made madeleines based on her recipe and it was far superior to the ones I used to bake previously. Even my mother-in-law said so!

So, which is your favourite cookbook? Do you have a particular favourite chef whose books you (pardon the pun) devour? Or, like many avid cooks, do you have a mini library of cookbooks at home? How about an Indian cookbook you trust? Do share in the comments section.

Meenakshi Ammal comes to my rescue most days and her dishes are a big hit in my house. The humble potato can take only so many forms before the kids start moaning, “Oh no, not that one again!” and it was on such a day, when requests for pie & mash were floating in the air that I came upon the Urulai Podimaas recipe in Samaithu Paar. Podimaas is like the Tamilian form of mashed veg and urulai podimaas is nothing but mashed potato, with a twist. But what a twist! Try making it this way and you’ll never go back to eating plain old mashed potato ever again!

You can also make the same dish using raw plantains – you’d have never tasted a vazhaikkai (raw plantain) in such an exotic format!

To start with, cut a plantain roughly into 3 small chunks and drop it in salted, boiling water. Do not peel the skin now. Once it is cooked, drain the hot water and keep the vegetable aside.

Cook the toor dal till it is half done.

In a non-stick pan, heat the oil. Drop the channa and ural dals in it and saute till golden. Next, add the slit green chillies and continue sauteing. Add grated ginger, dessicated coconut and torn curry leaves and fry for a minute or two. Finally, add some mustard seeds and allow it to splutter.

Strain the parboiled toor dal so no water remains and mix with the ingredients of the pan and let it all cook together.

Meanwhile, peel the skin off the cooked plantains and mash the chunks roughly, using the back of a fork. Season it with salt.

Add the mashed plantains to the non-stick pan and mix well. Add asafoetida and turmeric, check the salt and mix well.

Mother, writer, foodie, margarita lover, Lavanya is the exception to the rule that women are

Author’s Corner: With The Bong Mom