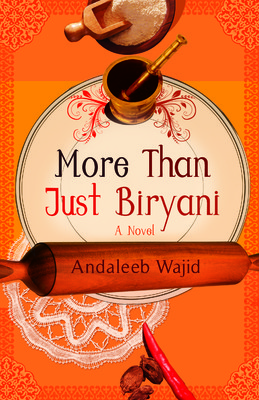 Once in a rare while, comes along a book that affects you viscerally, leaving you a seething mass of emotions. Where one can empathize with the characters and their lives – one almost wonders if the writer possessed some kind of magic whereby one’s innermost thoughts have somehow been laid bare, reflected in the words put down in black-and-white.

Sonia, a journalist, stumbles across a youtube demo for making biryani, at a time when ennui in her work has set in. Following her gut instinct about the woman in the video, she lands up at her doorstep, wanting to find out more, not yet sure about the direction she wants this lead to take. Zubi, the woman cooking the biryani in the video, proves to be a surprise in many ways. An uneasy friendship develops between the two women, and slowly, the layers to Zubi’s story begin peeling away, going back three generations, dazzling Sonia (and the reader) with the rich enmeshing of traditions, food, emotions, aspirations, tragedy, and hope.

Zubi, Zubi’s mother Tahera, and her mother Ruqayya, are personalities that seem to dovetail into each other, yet are discrete. Ruqayya, with her utter lack of interest in all things domestic, is compelled to help in the kitchen by her mother-in-law and the sundry women of the joint family, and discovers an unforeseen talent for cooking mouth-watering desserts. Tahera, whose life revolves around her kitchen and her husband Bilal (not necessarily in that order), finds out that her cooking will find a life of its own without always needing to be validated by someone. And of course, Zubi, a reluctant kitchen apprentice, who learns her cooking skills almost as if by osmosis, despite a mother indifferent to her needs, surprises herself by what she can accomplish, and learns in the process that destinies – from the mundane to the profound – need not necessarily be cloned. And Sonia? How does she fit in with all this? Read the book to find out.

While the stories of these three women could be called romances in essence, the braiding together of their stories and the food they make, take the narrative to a completely different, and delectable level. A plain vanilla love story, even if tender, becomes infused with the fragrance of mouth-wateringly prepared and described food – one could almost taste it. It made me itch to stop reading, search for the recipes, and cook them for myself – I have certainly become enamoured of the lauz she describes. Andaleeb Wajid’s More Than Just Biryani blog promises these recipes, and much more, for the interested reader.

(For readers in India) If you’d like to pick up More Than Just Biryani, you can do it through our affiliate links at Flipkart, Infibeam or Amazon India;

(For US readers) Go to our affiliate link at Amazon US

The Habit Of Love