The one of a kind MORA sarees are the dream of Ritika Mittal, an entrepeneur who tells us about her fascination with the North-east and why she doesn’t want big business! 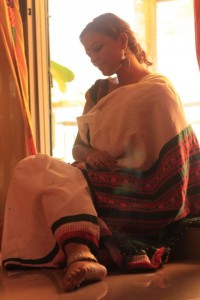 The one of a kind MORA sarees are the dream of Ritika Mittal, an entrepeneur who tells us about her fascination with the North-east and why she doesn’t want big business!

Coming across Ritika Mittal’s MORA sarees is something of a shock. Few of us even know that the North-eastern states of India produce some exquisite silk fabrics unique to them. Even stranger it is to find them allied to Kalamkari techniques from Andhra Pradesh and ending up as saris that look traditional, yet have a certain je ne sais quoi about them.

When I came across MORA on Facebook, I knew that I had to interview the woman behind it, and find out more.

I’ve learnt from your website about the curious way in which MORA started up, with you designing saris for your own wedding. How did it grow into a business venture?

Ritika Mittal: I designed my first sari in November 2008, just before my wedding in December. I had been working in media for over a decade – before I decided that I wanted to do textiles. I had no formal training in textiles, none at all – so I was like, let me try this and see how it goes! What happened was that I went backpacking to Ladakh for 2 months, and once I was there, I realized that what I really wanted to do was work with the local women’s groups – and the only way I could do that was with textiles.

I designed about 9-10 saris, and they all got sold through someone I know who runs a store in Vizag – I didn’t even know where those saris ultimately went! I realized that I couldn’t do it this way.

Why not? Why was it so important for you to know where your saris went?

Ritika Mittal: I can’t explain the kind of effort that goes into each MORA sari. They are like my own babies – I need to know where they have gone to. Now, we make a maximum of 100-150 one-of-a-kind saris a year. Most MORA buyers become a part of our network – they want to know what we are doing, where I am travelling to create textiles. It is a very personal connect.

So, tell us a little about how each MORA sari takes shape.

Ritika Mittal: I design the saris. My mother, who lives in a small town in Punjab, translates the design based just on the drawings I send her. In fact, when I started making saris for others, the longest time went into convincing mom that she was not ‘just a housewife’, that she has a storehouse of energy in her. It’s a very homely sort of environment in Punjab, where the tailoring and finishing is done – we know the tailors, we know their families, their children run around our house.

As for the fabrics, I travel for most of the year and spend time with the weavers. I don’t want to uproot weavers from their home environment, so instead, I travel and stay with them for months. Me and my mum – we are both horrible business people – we close our online sales when I am traveling. We do keep people updated by mail or through my blog. Once I am back and we have a collection ready, we let people know.

Why the reluctance to work in a more “business-like” fashion and grow?

Ritika Mittal:I don’t want to put deadlines on the weavers and artisans. How will an artisan breathe if they have to create under deadline? We are ok with making less money, but we don’t want to be big. We do it with a lot of love and we want to keep our people happy. We stick to 1 collection a year and the moment we feel pressure, we say ‘stop’! We have got offers from big stores to work with them, but we don’t want to. We give our weavers higher daily wages than the big guys. All our weavers get paid well and they are happy that they get to work with their traditional weaves and experiment as well. This is the first priority for me, and if I grow big, I may not be able to sustain this.

What is your special interest in textiles from the North-east of India?

Ritika Mittal: The Kala Ghoda festival has played a big role in taking MORA to others. In 2009, I visited the Kala Ghoda precursor wearing one of my designs, when an organizer who said spotted me, you must show at Kala Ghoda! That’s how I ended up exhibiting our collection at the 2010 event.

At the event, I don’t know why, I just announced to people that our next collection was going to be from the north-east – I am such a loudmouth! I got to Guwahati and that’s how my explorations began. For the 2011 collection, I have used traditional weaves from Mizoram, Nagaland, Manipur, Assam and Arunachal as borders. Now we are working on reviving traditional looms that are almost dying out. Pure muga silk from Manipur, for example is so difficult to find now – it is getting mixed with tussar.

North-east is going to be something that I will never leave. The rest of India gets taken care of – this place is so rich internally but gets nothing. Logistically it is very difficult – no courier, no transport – often I have to send hand-written letters, but I love it.

I cannot be everywhere, but I can do whatever possible in a small way, to revive textiles here. I am working with other techniques such as phulkari and kalamkari but my focus will be the north-east, the place that I now call my second home.