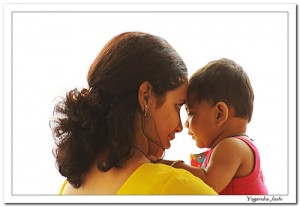 My Mother, My Hero

In the first story for this month’s ‘As You Write It’ writing theme, Amita talks about the lessons she learnt from her mother.

Aai came from a moderately conservative family. Yet she was the one to buy me my first single-strapped evening gown for a Catholic friend’s wedding. I was contemplating on a pencil skirt with a festive top to fit in the ambience when Aai dropped that parcel on my bed saying, “Try this and let me know what you feel when I get back home”. The smile twitching around her mouth should have warned me, but being an arrogant 21 year old made me rather upset that mom should take over my clothes-shopping. Well, what I had to say to her in the evening was a simple tear-filled “Thanks Ma, you simply rock!” to which she handed me the matching rosette she had picked from M&S to go with the gown.

Evening gowns, rosettes, parties, elaborate dressing were a far cry for mom who worked at SBI for most part of her working life. Yet her attempt at making me look and feel like ‘Cinderella at the princely ball’ was heart-touching. And this wasn’t the first one of its kind. Most of my first-times were with mom in tow, as much as her cultural background allowed her. I had my first taste of vodka with mom and dad, with her blatantly saying that I might as well get acquainted with everything illicitly enjoyable in her presence, rather than with my imbecile counterparts. A week before I was to get married, she gave me a run-down on contraception and got her gynaecologist friend to detail the options to me. “You don’t want to be caught with wailing kids, till you really want them in your life”, she explained. My friends had a minor heart-attack listening to her views since their moms had all impressed upon them the benefits of having kids at an early age.

Aai, unlike my aunts was never in a hurry to get me married away. “You’ll know when the right time is”, she said. She wasn’t too much in favour of conventional arranged matches though hers was a typically arranged one! She convinced me, my dad and the match-mediators how crucial it was to have more than one meeting between the girl & guy before making a decision of a life-time. There weren’t many takers of her viewpoint on this matter, but she was unflinching. “I want my girl to be responsible for her marriage ever after, and hence I am going to cover all my bases, you know”, she asserted confidently to anyone who brought this topic up.

When I started my venture of a bookstore, I gave copies of the book Who Moved My Cheese, signed by Aai to all my invitees. “Change is an imperative part of our life and the only constant in this universe. Who better can explain the importance of change than my Aai who has changed herself from a middle-class young girl, to a financially independent wife to a supportive, modern mother and now a hands-on grandmom. She defines the term “multifaceted” and to me she is the only celebrity whose autograph I’d seek on all my prized possessions”, I said in my extempore talk that day at the store. In spite of her feisty personality, Aai did not forget to enlist the unwavering support of daddy each time someone congratulated her for my success.

Mother’s Day for me is the day I was born, for that’s when Jyoti became Aai and my unfailing support system came into existence, which stands indomitable even today!

Congrats Amita! You win a copy of Chicken Soup For The Indian Mother’s Soul and Bringing Up Vasu from Westland Books.

Amita is a freelance writer and runs a personalized resume creation venture called Copytable. Based

In Life And Death