Sheila Kumar’s Kith And Kin is an almost voyeuristic peek into the lives of the Melekat clan, written in an unusual format. 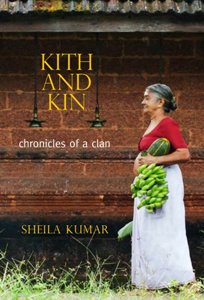 Sheila Kumar’s Kith And Kin is an almost voyeuristic peek into the lives of the Melekat clan, written in an unusual format.

Imagine a tree that grows tall and strong, and bears many branches; each of which may have its own separate destiny. Yet, there is no denying the link they have to the roots of the tree, which grow deep into the earth and bring them their sustenance. Sheila Kumar’s Kith And Kin bring to mind just such a tree. It is aptly subtitled – chronicles of a clan. Meet, the Melekats; they are a formidable bunch, in all their dysfunctional glory.

The novel is in an unusual format – 19 short stories, each in the voice of one of the various characters that populate the Melekat clan, narrated from the point of view of that particular person, a slice of everyday life as they live it. Each story is complete in itself, able to stand alone. Collectively, they paint an interesting picture of human dynamics in a large, extended family that is multitudinous in hopes, needs, wants, motives, wishes, action and station.

Right from the first story, Sheila Kumar’s narrative draws the reader into the lives of her characters. They are far from perfect, seriously flawed even, which makes them human and real. There are pragmatic ones as well as dreamers. There are impractical optimists who embark on impossible relationships as well as brooding pessimists who live only in past glory. There are passive-aggressive ones who feel relieved and ready to live their lives after the death of a spouse, as well as resentful ones who try to make things work despite everything. There is adultery as well as commitment. There is destructive hatred as well as joyous celebration. At one point I was wondering if I was reading about a celebrity I know of, one who belongs to the same community the Melekats belong to.

There is also an interesting circular pattern to the stories, which begin in the present, go into the past, and return to the present. We even have the first and last stories about the same characters. There is a sense of inevitability to the way they play out their destiny in the unexpected twist in the last story.

Ammini Amma rules over Mon Repos, the improbably named, sprawling ancestral home. She is the loved but somewhat feared mother, beloved grandmother or legendary matriarch, whose word is always the last one. She rarely features in person in the stories, but we get a composite picture of her through the voices of each character. Her presence is unmistakable in the background or foreground of their lives, as is that of Mon Repos, a home that is comparable to Manderlay in Daphne du Maurier‘s Rebecca or Tara in Margaret Mitchell’s Gone With The Wind – almost a separate character by itself.

There are a couple of stories, though, that dragged a bit and could have done with a re-write. There is also a story involving a ghost that could have been edited out; it somehow did not feel essential to the narrative as seen from a bird’s eye view. All in all, a well-written debut novel.

If you’re planning to purchase Sheila Kumar’s Kith And Kin do consider buying it through this Women’s Web affiliate link at Flipkart. We get a small share of the proceeds – every little bit will help us continue bringing you the content you like!

Readers outside India can purchase Kith And Kin through our affiliate link at Amazon.