In The Body Of The World

Eve Ensler’s In The Body Of The World is an intensely personal memoir of the author’s battle with cancer, which inspires compassion and hope. 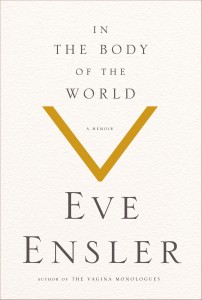 Activist Eve Ensler’s In The Body Of The World tries to relate the author’s battle with cancer, to a larger message of compassion for the body of the world.

I do not envy the writer of a memoir. The memoir is by definition deeply personal; yet, the writer must avoid coming across as self-obsessed and find a way to translate the minutiae of her life into something larger that the reader can find a way to tap into.

In her story of fighting cancer, In The Body Of The World, Eve Ensler, Activist and Author of The Vagina Monologues, attempts the difficult feat of tying her personal battle with cancer to the broader (and more familiar) context of her work in the Congo, with women who have been horrifically raped in the civil war.

Coincidences are discovered, the reader is left to infer causation. Ensler has spent her activist life talking about vaginas, now she has uterine cancer; just as the African women she supports had developed fistulas as a result of violent rape, her cancer creates a similar condition in her own body. Even her doctor suggests that there is something ‘spiritual’ about this, not just medical.

While Ensler’s work as an activist with rape survivors in the Congo is well known, I actually found these the toughest parts of the book to relate to. She also attempts to relate her illness to what she calls the cancer in the world, or the abuse of the earth from chemicals and other forms of human activity and greed, thus relating what is happening in her own body to the larger body of the world.

In The Body Of The World is a much more engrossing read, when Ensler drops the activist hat and becomes Everywoman fighting cancer. A woman who has trouble relating to her own body after years of abuse during childhood, Ensler discovers that her cancer forces her to focus on the body she has ignored for so long. The chapters that deal with the primal realities of the body – blood, pain, excrement, weakness and fear, resonated deeply with me.

As she progresses from one stage of the treatment to another and documents it, Ensler is poignant and funny in turns, and nothing is off-limits, including her experience of having to use a stoma for bodily wastes. She also expresses vividly her own fears before and during the treatment, and this is something that makes the story very real, as anyone who has lived through cancer or seen a family member go through it would know.

The memoir includes accounts of many friends and family members, some who float in and out of chapters without really leaving a mark; to some extent, they become a blur. It is interesting that the characters who really make an impact are the author’s mother, father and sister, all of whom she has had troubled relationships with. Ensler’s sister Lu is the silver lining against the darkness of the cancer, emerging out of nowhere to take charge, brushing aside the ghosts of the past. In some ways, she is the calm, homely anti-thesis to Eve’s frantic, externally directed personality.

In The Body Of The World reads at its best when it is all about the cancer; yet, it is hard to classify just as a cancer memoir, given that we know who the writer is, and she herself sees a connection between the cancer and the other parts of her life. Depending on how sceptical you tend to be about such connections, you could either read it as a larger story of learning to care about the body of the world, or simply an individual, honest story of being in the grip of illness.

If you’re planning to purchase Eve Ensler’s In The Body Of The World do consider buying it through this Women’s Web affiliate link at Flipkart. We get a small share of the proceeds – every little bit will help us continue bringing you the content you like!

Readers outside India can purchase In The Body Of The World through our affiliate link at Amazon.